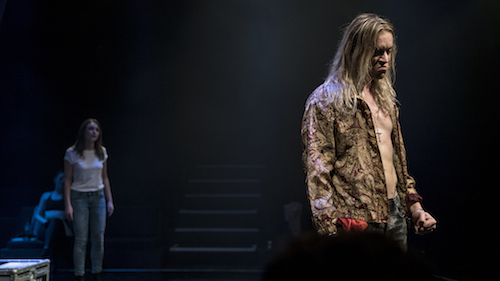 27 at the Cockpit Theatre

Taking inspiration from the many music legends who lost their lives at an early age, 27 is a brand new rock musical from debutant Sam Cassidy that, while boasting a decent original score, sadly plods its way through a particularly sub-par book that not even its undoubtedly talented cast can recover into something believable or relatable.

The plot starts with cocaine-addicted Orpheus and his band struggling in their attempts to find success in the competitive and brutal music industry, before out of nowhere managing to sign a deal with the mysterious “Olympus Records” and propelling instantly to fame (literally during one song). Mirroring real life stories we’ve heard before, Orpheus struggles to come to grips with his new found fame and quickly falls into a spiral of drug-induced despair, all to the dismay of his band mates and long suffering girlfriend, Amy. After a tragedy occurs at the end of the first half, the show takes a weird turn in the second with Orpheus setting on a quest to the underworld not unlike the one taken by his namesake from Greek mythology.

The script follows a very generic format and much of the dialogue is fake and unnatural. While benefiting from its fast-paced nature, it does seem to sacrifice any character development which makes it difficult to empathise with the sadder moments in the musical. The show can’t quite decide how serious to take itself, with some sections acknowledging the farcical setting that are instantly followed by clichéd monologues with deep meaning played strait-laced. The massive switch in story at the start of the second act makes the show appear like it’s ran out of ideas too early, with the “quest” section, while exciting and well-executed, feeling nothing more than a string of quirky music videos.

The score, in contrast, is overall pretty good. Clearly taking creative influence from some of the artists it bases its premise on, the music is fun and well-written and while baring the occasional dud-lyric works well as an accomplished original score. The casting of this show, it has to be said, is also very good with the actors making the most of the material they have to work with and performing some pretty difficult vocal sections.

Greg Oliver as the lead protagonist does not let up throughout the show and delivers his part admirably. He is barely given a moment off-stage and his intense portrayal of a rock star struggling with addiction is incredibly powerful and raw. Even delivering the more hammy lines with meaning, he lives and breathes this character, ensuring that the fast-paced show doesn’t fall flat; all this before mentioning his undeniably strongest ability, which is his flawless rock singer voice—he effortlessly blasts out incredibly high falsetto notes while maintaining a listenable tone.

Ryan Molloy plays record label CEO / Hades and is clearly having a lot of fun with his part. Again, his vocal ability is undeniably breath-taking but he also manages to bring heaps of charisma and style to his character, lifting every scene he is involved in. Cassie Compton is a little wooden in her portrayal of Amy, failing to really get under the skin of her character, though the lines she has to work with are pretty superficial and the character is fundamentally underdeveloped. She does, however, close the first act beautifully.

The young chorus have energy in bucketloads and look fabulous performing the potent and dramatic choreography. The contemporary styling works well for the piece and adds extra intensity to the already invasive rock score. They move around the stylish, metallic set with vigour and provide solid accompaniment to the leads. The show begins with Macbeth-esque narrating witches that actually create a lot of intrigue but sadly get left behind as the story progresses. Their big second act number is the highlight of the show and leaves you wishing they had more to do.

As I have mentioned before, I generally have a lot of respect for any new original musical given the bombardment of jukebox, revivals and film adaptations that flood London these days, and while I do still respect the efforts and tenacity of Sam Cassidy and team to get this show up and running, it is sadly let down by an underdeveloped story. It is still a very stylish production with a solid, if not fairly unmemorable, score and an incredibly talented pool of actors and musicians who give it their all from start to finish.