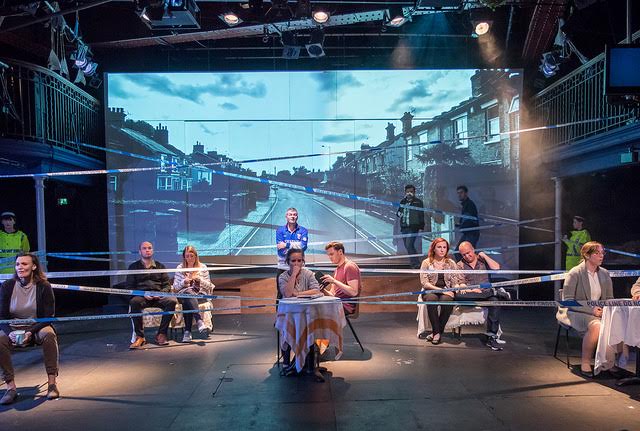 A very stylish and smart production of an intriguing gem of a musical that first premiered in the National Theatre back in 2011, Sedos’ take on London Road overcomes an incredibly challenging book and score and creates something that is touching, funny, uncomfortable and thought-provoking.

The premise surrounds the tragic murders of 5 prostitutes in Ipswich back in 2006, but rather than fix on the details of the investigation or the actual killings themselves, the musical focuses on the normal people from the area, specifically London Road, and how they dealt with the dramatic shift in their otherwise basic and uneventful lives. What makes this show unique is that all the dialogue and lyrics are taken from news coverage around the event and actual interviews with local residents. The speech is delivered exactly how it was spoken live, including pauses, ums and ahhs, which is fascinating when recreated as a piece of theatre. The songs also take this form, using these interviews as lyrics and playing around with pronunciation, intonation and repetition to produce something emotionally gripping and mesmerising.

Sedos’ production boasts a strong cast who work together closely, performing as a well-oiled ensemble. The show demands intricacy in timing, and ignoring only a couple of slight fumbles, the cast manage to pull this off impeccably. Despite the tragic backdrop, there are also many laughs in Alecky Blythe’s book, most notably during the conversations with couples living on the street. It is quite remarkable, when interviews are replicated verbatim, just how many interruptions and pauses there are in natural speech. The delivery of this is surprisingly entertaining, not least with Abigail Francis and Tom Brennan as Jan and Tim, who react wonderfully to each other, not just through dialogue but also through their subtle facial expressions.

Not only does Adam Cork’s magnificent score demand perfect timing, it also requires the cast to perform difficult close harmonies in many of the numbers, which, to their credit, they do effortlessly. Jordan Clarke should receive plaudits for his work in ensuring the high calibre in which these songs are performed that in lesser hands could really fall flat. Director, Matt Gould, keeps much of the movement and staging minimal and allows the action to play out through the songs and dialogue. In particular, a late scene depicting an interview with prostitutes from the area, post-tragedy, is particularly moving and the decision to allow long silences in between the dialogue cleverly heightens the drama.

Unfortunately, the actors are let down by a substandard set, specifically sliding doors at the back of the stage that move anything but smoothly. The reason for their being is admittedly a good technical decision—much of the scene setting relies on projections onto the sliding doors, be that a back garden or a court room. The doors are used so they can be opened up to reveal different settings or increase the stage depth, but sadly the lack of fluidity or speed in their movement becomes a distraction, particularly as new scenes begin while they are still being set. More generally, some of the scene changes are slightly clunky, though the overall design is nice and simplistic and does enough to place the scenes. The use of live streaming to television screens is smartly done during news reports within the piece and Gould creates an intriguing tableau with police tape during an act one scene.

Blythe and Cork’s intelligent and complex writing ensures that this musical is no easy task to pull off but Sedos successfully showcase the drama entertainingly and at a high standard. While they could benefit from a less temperamental set and slight polishing of some of the numbers, this is a solid production of a wonderful piece of writing.