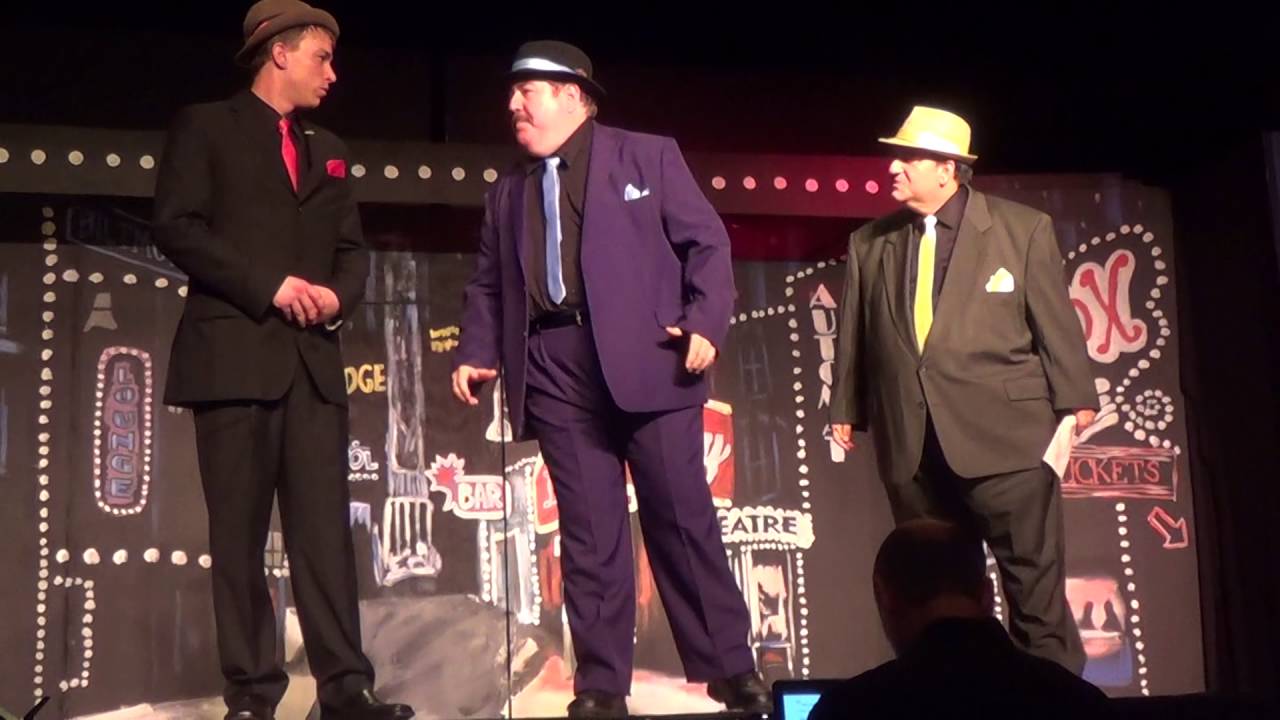 Maggie’s Little Theater, a community theater located in Queens, NY, is in its ninth season at St. Margaret Parish Hall. It presents two musical productions a year, and educates participants in all aspects of stage production.

This year, it presented the classic Guys and Dolls, a musical about the affable gambler Nathan Detroit (Alan Perkins) who needs money to run an illegal craps game. To raise the money, he bets the famous gambler Sky Masterson (Nic Anthony Calabor) that he cannot convince Sarah Brown (Alex Jamison) to go on a date with him to Havana within a day. At the same time, Nathan’s fiancé of 14 years, Miss Adelaide (Dolores Voyer) plots to finally get Nathan to take the plunge and get married. The orchestra, led by Frank Auriemma, covers a number of the memorable tunes including “Luck Be A Lady,” “Bushel And A Peck,” and “Guys & Dolls.”

The backdrop is 1920s New York; a gothic city on gritty black and white film. Still, the bold colors of garish ties conspicuously hang off men in their striped suits. Men plot and scheme and cause all sorts of trouble. Women are crafty and independent, more subtly than the men, yet trapped by patriarchal gender norms. It’s a world where a glance or a shared moment can lead to love. Miscommunication or bad timing complicates even the best intentions. And every voice sounds as if it is being broadcast over a shortwave radio.

Using the same rubric to grade a community theater production of Guy’s & Dolls as a professional Broadway show would be pointless and even cruel. The budgets are vastly different. Although the $1 drinks and $2 hot dog prices were so refreshing considering that the concession stand at the Richard Rodgers Theatre pretty much charges you a sawbuck just for looking at the shrunken bag of pretzels. And most importantly, I know of no Broadway theater that sells hot dogs.

Yet, the best part of the performance was the quality and caliber of the singing voices. Three of the leads particularly shone. Nic Anthony Calabor (Sky) had a rich voice and seasoned presence, and he played Sky with a rough but likeable swagger. Alex Jamison (Sarah) had a beautiful and pure voice, and her solos stole the show. Alan Perkins (Nathan Detroit) played a genial yet nervous Nathan. He previously played Tevye in a production of Fiddler on the Roof, a role that he must have been destined to play. Even as Nathan Detroit, a bit of Tevye shone through (and I mean that in the best way possible).

While the show still sparkled, especially with the lovely voices of the three leads, community theater is not without its quirks. For instance, the acting was often stilted. The venue was a poorly air-conditioned church. The performance dragged on too long. The sound system screeched at inopportune times. The costumes were an anachronistic mix of period pieces and modern sneakers or shirts. And with community theater, there is an ever-present (although irrational) fear that the performers are going to come into the audience and make you interact with them.

But nitpicking aside, the biggest criticism of the show is that duets and group numbers never wowed. So many individuals had fantastic voices, but together they never meshed. It was a dance where one person was doing salsa, and the other the moonwalk.

In the same vein, while the choreography (also created by Mr. Calabor) was excellent and creative (in particular a rousing and energetic Luck Be A Lady), other numbers, while certainly aspirational, tended to feel stilted as cast members struggled to find their marks and fell short of harmonizing.

Still, there is something always magical about theater and classical musical numbers that can transcend the hypercritical analysis. It’s the same magic that you find when the women sitting next to you giggle with glee as they sing along to Adelaide’s Lament (“A person can develop a cough!”). Or the excitement of witnessing friends and family on stage singing their hearts out.