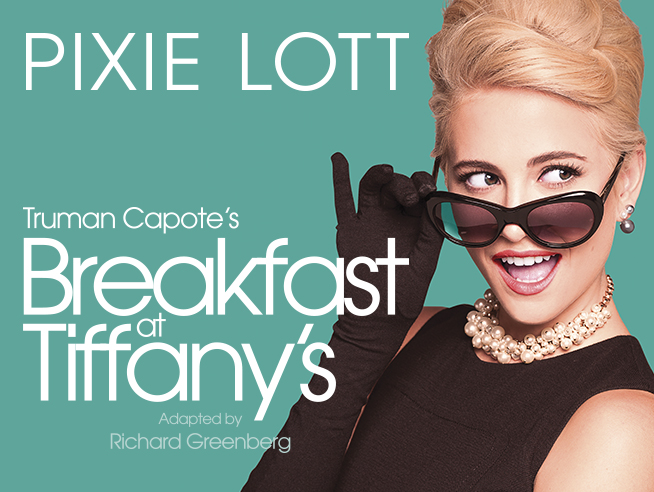 Breakfast at Tiffany’s at the Royal Haymarket

A mere 100 pages of source material. A gay narrator whose literary obsession with the heroine prompts a wariness in the reader. An elegant, peripatetic subject: Holly Golightly, characterised as much by secondhand as firsthand accounts; a restless waif whose eternal discomfort sees her cycling through a bevy of failed suitors. How to adapt this? Edwards and Axelrod allowed the subjective angle of the book to come through cinematography in the 1961 adaptation. That had mixed results. Richard Greenberg’s take is even flatter, a stodgy march through facts and lame staging that has none of its source’s joy.

Character seem to just talk, a trait clearly endemic to theatre, but this talk is patter. Capote’s language does not seep into dialogue. Mostly stark, the striking observations come via a narrator in Matt Barber, whose lines often copy wholesale from the original. This could work, but nothing poetic escapes the confines of his direct addresses to the audience. Even with no distinct tone, the thing is sapped of vigour: the supposedly dynamic party scenes are lifeless, tertiary characters so made to pad them with trashy quips. Barber tries to jump-start proceedings, fumbling over his accent, though these blustering efforts mar what makes his role so great in the book. His book-self is meek and it contrasts well to his trenchant commentary; here, he presents an effusive fool who, in disagreement with the source but in keeping with the bowdlerised movie, falls for Holly despite his queer credentials. This is made troublesome by the play’s insistence that gay behaviour is for the desperate, such as where, in a new insert by Greenberg, the leading man is asked favours of by a bargaining producer.

A bold Holly could offset this duff script, but Pixie Lott misses her mark. It is not her fickle pronunciation (although this shows inexperience) that upsets; it is rather her cookie-cutter delivery with a broad inflection at the end of every sentence. Sure, there is ardour behind her crude technique, but the sameness is soon unendurable. Director Nikolai Foster similarly takes no risks, chary of giving the script its desperately-needed overhaul. What he does do is play to Lott’s singing, used amply and unnecessarily, Ms. Golightly delivering three numbers with a pleasing yet anachronistic style of baby-talk vowels and melisma.

Breakfast at Tiffany’s is a poor adaptation, just like the film, a thing in itself exalted mainly for the beauty of Hepburn, a song and its costumes. Much to the dismay of nostalgia-junkies who have and will keep this production running, I maintain that putting Holly in full view of an audience, regardless of medium, ruins her essential quality: elusiveness. She eludes us in both character and narrative in the source; any attempt to impart this in an adaptation would require far more radical a technique than what has currently, lazily, been employed.

Honestly, the best part is that there is sometimes a cat on stage.