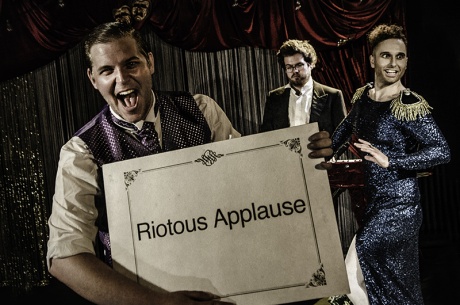 How to Win Against History at the Ovalhouse Theatre

The absurd can be the best escape from reality. People laugh not knowing why but it doesn’t really matter in the end because everyone is entertained. This is precisely how audiences feel as they enjoy How To Win Against History at the Ovalhouse Theatre. As people walk in, there is a large string of lights on stage, a man with a big head of hair standing in front of a keyboard. Then another man walks on stage with a blue sequined dress while another walks in wearing a Victorian suit. The men start to sing, they start to talk, and somehow, everyone is in stitches from the very beginning. As the story unfolds, spectators understand that this is a caricatured depiction of the story of Henry Paget, the Marquis of Anglesey, who spent his twenties as a wealthy man who thoroughly enjoyed cross dressing in a time where this was frowned upon, to say the least. The satire of the Victorian era is quite refreshing. Jokes are made of British aristocracy, of Eton College and of social hierarchy. During this story nothing in Henry’s life goes well but he seems to have fun living life the way he sees fit.

The story brings together song and dance with darker themes of financial ruin and death. These are normally not matters to smile about, but everything is taken so lightly that audiences cannot help but laugh. While at times the comic relief might seem a little too dark, it adds to the whole craziness of the night.

The plot is somewhat unclear but it is the random eruption into song and dance that gets the crowd roaring with laughter. From the musical number of the professor at Eton College to the Butterfly Dance where all we see is Seiriol Davies with his arms wide open whispering “flutter, flutter”, the show promises smiles and chuckles. The performance would not be as good as it is without the cast. Indeed, all three members bring in their own element of the absurd which makes the whole show as weird as it can get. Matthew Blake easily switches from Henry’s wife to the loyal servant who follows Henry through his theatrical tour around Europe. His voice is phenomenal, as is his presence on stage. The piano player, played by Dylan Townley, brings a musical addition to the show that adds to the poetic and comical themes. There is no other word to describe Seiriol Davies’ performance other than strange. But here, strange is good, because strange makes everyone laugh harder than they thought possible.

Audiences looking for a clear plot with a conventional structure should steer clear of this play. This is made for people who embrace silly songs, goofy dances and tremendously entertaining actors trying to find humor in every way possible. Very little in How To Win Against History makes sense and that is what makes it so much fun to watch.