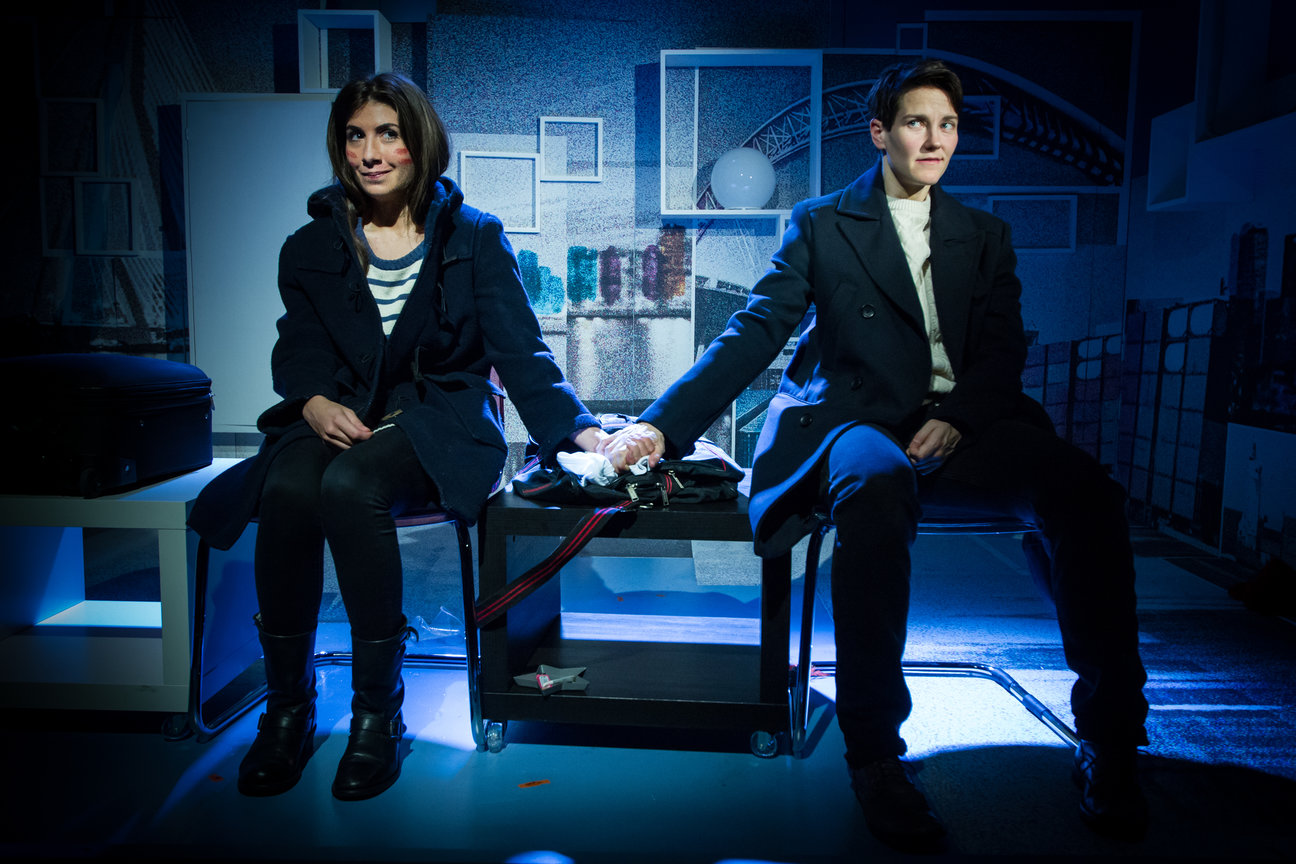 From the moment the audience walks into Trafalgar Studios, they know it will be a fun evening. A girl in funky clothing is dancing around the room to pop music and another is sitting and frantically looking at her computer. No one is quite sure what to expect, but the mood is set at the beginning as a playful one. Rotterdam begins and laughter takes over the room. From the witty jokes to the orange wig, there is something for everyone to laugh at.

This is the story of Alice and Fiona, a lesbian couple living in Rotterdam. Alice has till not told her parents about her sexual orientation and hesitates to do so for a long time. As the plot unfolds, Alice realizes that it was probably good not to say anything just yet as she learns that Fiona wants to become a man. She wants to be called Adrian because she doesn’t feel right in a woman’s body. More often than not, plays about transgender topics tend to be quite depressing and heavy. This play does exactly the opposite. It takes darker and less approachable societal themes and turns it into a wildly entertaining night. Despite this, it manages to get spectators reflecting on these issues, but not in a daunting way. Jon Brittain tackles a subject still often seen as taboo but manages to do it without shocking spectators in an overtly pronounced manner.

Donnacadh O’Briain’s direction is well-executed. Working with such a small stage does not seem to be a challenge. No one feels they are missing out even if they are sitting on the side and cannot see every facial expression. The décor transitions well from being a flat to a pub, an office or a club. The musical accompaniment makes the changes all the more credible. The décor is not very pretty but it does the trick. More effort is put into the acting, which is for the better, because the acting is truly superb.

The cast is small but extremely talented. Each character goes through a tremendous development as the story unfolds and each actor portrays this beautifully. The moments of intense sadness are accompanied by irrational rage where Fiona, played by Anna Martine and later Lelani, performed by Jessica Clark, are alone on stage, punching the walls and completely taken into their gloom. These two scenes are very powerful. The humorous scenes are just as amusing on another emotional level. When actors must pause to allow the audience to stop laughing, it tends to be a good sign. From Alice’s uptight manner, played by Alice McCarthy, to Josh’s inappropriate comic relief, portrayed by Ed Eales-White, there is rarely a dull moment in Rotterdam.

When the person we love changes into someone else, can we still love them? Many would struggle to answer this. Rotterdam is not to be missed.