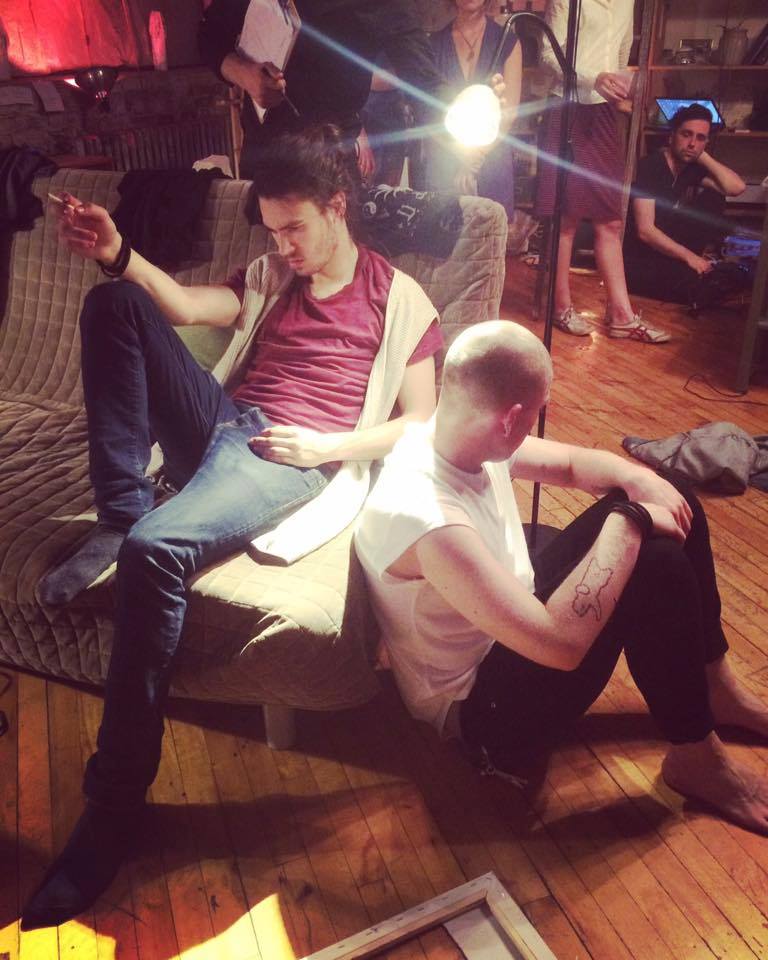 Written and directed by Andrew Jamieson, Ravenous Theatre’s Lethal and Young is only on for a short time at the Hashtag gallery as a fundraiser for a more long-term project.

The play takes place in the basement of the gallery, and there is standing room only as the audience finds themselves able to mill around the apartment-set freely. The show lets the audience play the role of fly on the wall for an hour in the world of two young men. This is the story of Conor (Andrew Jamieson) and Julian (Henri Rabalais), a young couple who have just gotten back from a party. The rest of the show is about the status of their relationship, each trying to affect the other, trying to hurt each other, get the other one to react, to be recognized. There is a palpable history here, in the set of the apartment, in their references, and in the fight they are having as they walk in. At first, they seem to be fighting about how Conor was flirting with someone in front of Julian, but as the performance unfolds we see that the fight is about so much more than that: it’s about autonomy and respect, but also the ways in which they depend on each other, all of which is further complicated by Conor’s mental illness.

The performance is peppered with minor and less minor interventions by the stage hands, sometimes handing the couple items they cannot find, and at other times setting up a keyboard in the centre of the room for Julian to perform one of a few pieces of music the show features. The show is continually aware of itself as a performance, and while the set up is slightly awkward it’s also one of the many tongue-in-cheek moments of this show that make it charming. My favourite moment is when the lovers crawl under the covers and we are treated to a slideshow entitled ‘This Is Sex.’ The slides feature words like ‘ohhhh’ and ‘mmmmm’ and ‘wait I want to be on top’, narrating a passionate and at times awkward and hilarious sex scene between the two.

The only aspect of the show that doesn’t quite land for me is a war poem near the end, performed by both Conor and Julian, which seems like a bit of a heavy handed attempt at drawing an analogy between relationships and war. This is an old metaphor, and kind of a clunky one to be honest, especially as it does a disservice to the rest of the piece which depicts a complicated relationship that is fraught with tension and antagonism, but also affection and familiarity and love. Luckily the story isn’t too overshadowed by this moment, and I was left with a sense that I’d just seen something much more personal, and more sophisticated, than I’d expected.