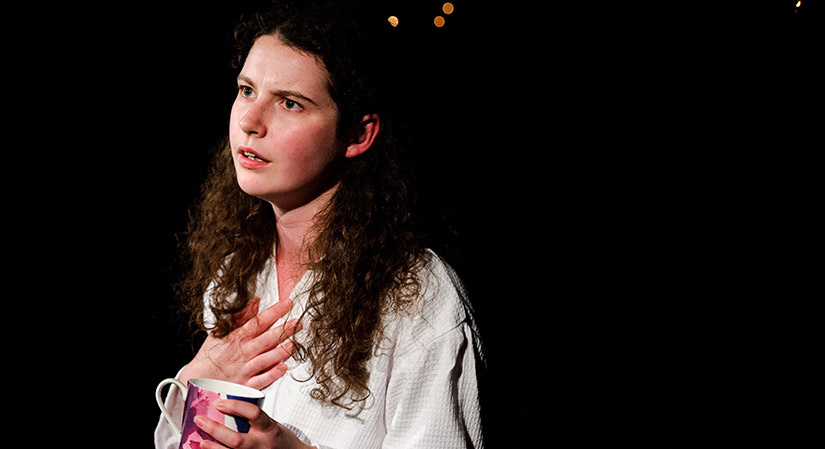 Ross and Rachel at the Battersea Arts Centre

The power of silence in theatre is impressive. There is often no need for music when the emotions felt on stage are strong enough to relay to the audience. But this can be difficult to do when there is only one actor on stage. This is no challenge for Molly Vevers in her performance of Ross and Rachel at the Battersea Arts Centre. As the play begins, everyone seems a little confused at the set design. Candles are placed around a low circular structure with some water inside. The play begins and Ms. Vevers walks on stage in a white bathrobe and with a cup of coffee. At the start, all she does is look at the spectators. There is no sound, there are only her eyes staring at the people in the room. Some look away but this peculiar beginning intrigues some to look back at her. She stands behind the water basin. As the play continues, she puts her feet in the water. She washes off her face with it and she lies in it. This adds a creative touch to the performance, making it more interesting than merely listening to a failed love story. Ms. Vevers’ extraordinary performance goes hand in hand with Thomas Martin’s directing as well as Alison Neighbour’s set design, turning the whole evening into an artistically beautiful portrayal of love, tragedy, disease and despair.

As the story unfolds, the audience realizes that there is no male actor named Ross. There is only Ms. Vevers, playing both roles. She speaks for Ross and for Rachel. She keeps the same tone to her voice; she embodies Ross; there is no need to change the way she speaks. Because of the numerous flashbacks that are mentioned in the performance, it can sometimes be extremely difficult to follow the plot. Maybe that is the point of the confusion? Perhaps making everything seem like a blur is the purpose of the performance. In any case, it takes a little getting used to, but eventually everyone understands the story.

Ross and Rachel are a married couple who have been “on again off again” for decades. They love and they fight, as do most spouses. It does not feel as though there is a true love between them; there is something similar to love, but it is unclear whether or not it is the real thing. The marriage is struck by tragedy when Ross falls ill. One would think that Rachel would be destroyed by the realization that her husband will soon be gone. But Rachel seems fine; it seems as though she wants a release from her life, that she is looking for something more. Molly Vevers offers an exceptional performance. She is able to shift the mood of the room with such ease; everyone feels happiness and joy at the description of the marriage but they also feel intense sadness and empathy for the later years after Ross gets sick. While this is an unusual performance, it should be praised for its difference, and not criticized for its unorthodoxy.