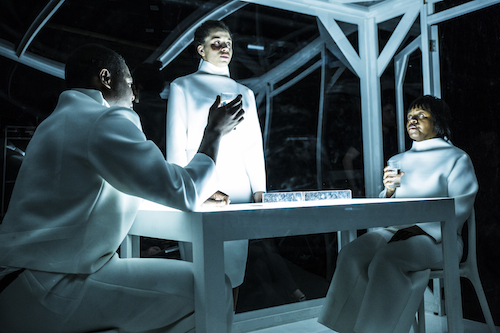 Self-assured though with no emotional investment, Phillip Ridley’s Karagula is messy, tame sci-fi. Despite deft touches on the production side (read: design), the work never clinches the operatic status it desires. On another planet, a milkshake-drinking society that habitually sacrifices its Prom King and Queen is in crisis; intercut with this we see (unclear where in spacetime) white-robed figures exert totalitarian control; feral children suffer telepathic powers; desert tribesmen foment insurrection.

This seemingly bitty text does have a through line: it studies civilisation’s persistence, the variable that survives despite its many deaths through nature and revolution. Principally persistent is love, the element that ties the plot’s bulk together and bookends the play with a lovers’ embrace. The fragmentary narrative follows myriad characters at stages of their alien society; however, it never develops any one thread to discernible depth. Karagula feels like an appropriation of various pages of a chunky sci-fi novel without care for the emotional result; there is no cause for empathy. Its whisking in and out of fantastical locales leaves little for the development of its already shallow mankind-will-survive motif.

For all its peccadillos the work’s real sin is its recourse to cliché where the writing devolves into the jargon-filled nightmare of a severely edgy Doctor Who episode. Triteness abounds in certain scenes: a general frets in a bunker over his lost war, a desert exile tells her friend to leave her behind, a religious council butt heads over biblical interpretation; so much is so standard. Regrettably, Ridley will likely impress many with his weird confidence in sci-fi authorship; essentially, his method of piling on invented jargon (a truly irksome trope in novels) will likely help waive the work’s emotional debt for critics.

What works and should be Karagula’s focus is the politics and atmosphere of the milkshake-quaffing culture that features heavily in the plot. Pleasantly uncanny, its marshmallow pink-and-white, Normal-Rockwell-on-steroids aesthetic clashes well with the ultraviolent action. There is some satirical space here, even it remains uncharted. Nevertheless, with the aesthetic in mind, the production excels visually. Shawn Soh—with co-designer Frankie Bradshaw and Costume Supervisor Kitty Hawkins—show insane prowess in their demented runway shows of sleek chic and rugged anger: the bleached malevolence of the future ruling class and the Mad Max inspired barbarism of the protagonists are examples of a costuming that covers over 70 characters—this is an award-worthy feat.

Directing is mostly competent by Max Barton with a neat use of levels to signal different time periods, though his traverse set-up results in a surfeit of head-turning. The cast highlights are Obi Abili and Lynette Clarke, who deliver a frosty exercise in tension in an ultra-modern interrogation scene, marred only by technical audio errors.

It is not an utter disaster. There are strands that, plucked out and formed anew, could make a striking piece; unfortunately, Ridley’s work is incapable of hitting an empathetic beat. Its creative faults notwithstanding, Soh and his team are the true heroes of Karagula—its epic quality lies in their achievement rather than in the work itself.