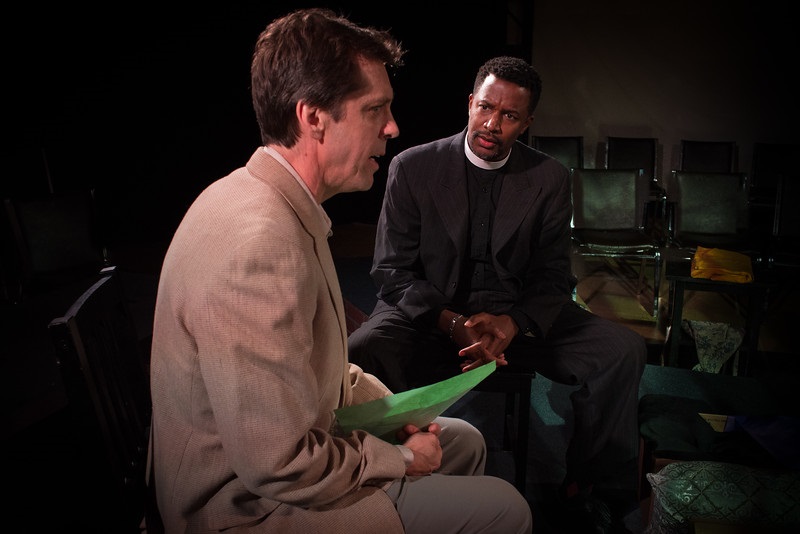 In troubled times, there are those who seek sources of strength from which they can derive solace or answers. For some, religious faith is the healing crutch on which they rely – a belief in some greater power with the ability to lift away pain and burdens (for the devout, of course). Unfortunately, blind belief is sometimes just blinding, and reliance upon divine intervention or otherworldly grace to address the challenges of the real world can sometimes lead to greater suffering. As is the case in UP Theater Company’s production of Vanessa Shealy’s play An American Drum Circle.

Set just at the onset of the new millennium, An American Drum Circle opens on a family, still reeling from the loss of their beloved wife and mother to cancer. Blaming her father, Ron, for her mother’s death because of his mismanagement of the family’s finances, Mandy leaves to stay with a friend in Tulsa, Oklahoma where she meets a young Nigerian man, Olujimi, who is seeking fame and fortune as a rap star. While Mandy grows closer to Olujimi, her father joins a new church in search of comfort after his losses. After consulting with the minister and praying on the subject, he is suddenly contacted by an overseas investor who would like to pay him a substantial sum of money if he helps invest the sizable inheritance – a gift that he interprets as a sign from God and an answer to his prayer. Desperate to acquire money in order to send Mandy back to college and repair his fractured family, Ron borrows cash from churchgoers and neighbors to invest in the deal. But sudden windfalls are often too good to be true, and, the investment threatens to destroy, not aid, both Ron and Mandy’s tenuous relationships.

Admittedly, it is difficult to transport oneself back to the mindset of 1999 – the year in which the play is set. An eye roll might be reflexive when Ron inadvisably responds to an e-mail from a Nigerian woman seeking assistance with her massive fortune in return for $3,000,000 (after Ron pays numerous large fees to a foreign bank account, of course). After all, these scams are pop culture fodder now.* But, in 1999 smaller households in the Midwest were still enjoying relatively new access to the World Wide Web. Moreover, Ron is precisely the sort of gullible mind that would embrace just such a scheme. Shealy smartly heightens Ron’s tragic fall by crafting a character who is not simply some greedy dolt looking to get rich quickly. No, it is much worse. Ron is a gullible giver. He is an ignorant man who desires, above all else, to reunite his family and use his newfound wealth to help others. It would be fair easier to dismiss Ron’s plight if his intentions appeared hypocritical – if he sought wealth only for personal gain and invoked religious dogma to acquire it or to justify his right to it. Yet, his motivations appear quite honest and even a bit praiseworthy, which makes his compounded suffering all the more difficult to watch.

An American Drum Circle starts out slowly, spending too much time focused on Mandy. Unfortunately, Mandy is the least interesting of Shealy’s creations – a fairly vanilla, unmotivated Midwesterner without direction or much of a personality, it is difficult to believe that Nigerian musician, Olujimi, finds himself attracted to such a bland and sulky young postal employee. However, the show picks up speed in the second half as revelations are made that rock the precarious sense of stability in the lives of the main characters. Another creative decision made by the playwright that raises questions is the meaning behind the title of the show itself. While the play incorporates concepts of faith, community and interconnectedness, the use of the term “drum circle” seems like a strained attempt to layer meaning on top of the plot rather than highlighting the themes ingrained in the narrative.

Director Melissa Attebery has brought together a strong ensemble of actors who excel at crafting compelling, sympathetic, nuanced and intriguing characters. Dennis Fox as Mandy’s naïve father does an exemplary job of endearing Ron to the audience despite the man’s personal and professional failures. Adopting a slow western drawl, Fox embodies Ron’s innocence with his wide-eyed appearance and uneasy body language – as if he were a man constantly out of his element but trying desperately to find his place. Creating memorable and humorous secondary characters are Rick Younger and Nneoma Nkuku who inject the show with a charming liveliness. Serge Thony similarly gives a strong performance as Olujimi, portraying the young man’s drive to achieve his own American dream with honesty and appreciable charm.

An American Drum Circle provides little in the way of resolution for its characters or for the audience, but it explores both the intersection of faith and materiality and the spiritual and personal aftermath when faith fails to cure real world ills. The real tragedy in Shealy’s work is not her characters’ fervent and apparently ineffectual reliance upon God, which does them great harm – rather, it is her characters’ continued pursuit of God’s assistance at the end of the play that is truly tragic. Ultimately, lessons are ignored in favor of perpetuating a cycle of self-destructive divine co-dependence. While the playwright falters in her pacing and some of the characters could be more fleshed out, Shealy’s piece is a solid exploration of the power of belief, self-reliance, and common sense.

*HERE is an enjoyable Ted Talk on the subject.