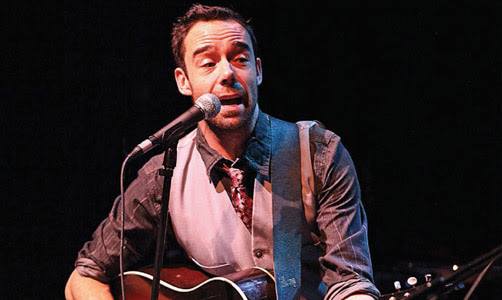 This month we were treated to two pieces that weren’t really musical theatre, nor were they strictly concerts. They were cabarets, I guess, but they were really stage-bound musical explorations of people and place by musicians who make theatre and theatre people who make music.

Ryan G. Hinds’ Say Grace
Sidelined for 6 months after a nasty bout of pneumonia, cabaret great Ryan G. Hinds returned to the stage on April 3rd to say goodbye to his Buddies in Bad Times residency and the stage he’d called home for two years. Still not fully back from his illness, his voice didn’t have full power as he tackled the bold disco tunes made famous by Grace Jones but what makes a Hinds show work is the man himself far more than his vocals and from his first entrance to his final bow, the showman’s effortless charm, warmth and enthusiasm was in full effect. It’s telling that the cabaret’s best numbers were the jokes- a mumbled impression of his friend forgetting the words to “La Vie en Rose” after refusing to rehearse ahead of a big concert; an absurd medly of disco-fied Broadway ballads that had me in stitches. There are better singers and better impressionists but there are few performers more delightful than Ryan G. Hinds and Say Grace was the perfect sendoff as he says goodbye (for now) to Buddies.

Soulpepper’s Melting Pot
I don’t often get to cover Soulpepper’s music program anymore. I suppose it’s technically an expansion but the move away from October’s grand Global Cabaret Weekend to weekly Saturday cabarets throughout the year has resulted in my missing most recent offerings from what is arguably the theatre company’s most interesting department (who has time to go down to the distillery on a Saturday for an hour show?). I’ll never stop missing the cabaret weekend but at least the Concert Series that places the best of the weekly cabarets onto the mainstage for a (sadly very limited) run gives the audience their much-needed dose of director of music Mike Ross and his best collaborators. With Taking the A Train Downtown Manhattan- The Melting Pot, the first in a planned series of New York-centric cabarets, Ross once again assembles a strong group and assigns them well, featuring a slew of beautifully rearranged classics tracing the cultural history of downtown Manhattan (the Toronto tie-in at the end is cheesy and unnecessary but it’s easy to understand why they thought it was a good idea). Featuring songs exclusively written by members of three key refugee cultures that form the heart of New York’s musical identity (the Irish, the Jews and African Americans), The Melting Pot has many high points, including a thrilling battle between celtic stepper Stephanie Cadman and tap dancer Travis Knights, a gorgeous trio of black spirituals sung in counterpoint by Jackie Richardson, Andrew Penner and fabulous new find Cassius Crieghtney, and the return of that Joplin/Cohen duet I couldn’t stop talking about from the American Pie cabaret. In the absence of American Pie‘s Frank Cox-O’Connell, Ross takes over “Chelsea Hotel” duty framing Hailey Gillis’ “Piece of My Heart”, his lighthearted manner and piano arrangement changing the tone slightly (the more intense Cox-O’Connell did the piece a capella with a cajón) but it’s still pretty great. Soulpepper maestro Albert Schultz makes an anticipated on-stage appearance hosting the evening (and singing one song) but its Ross, his arrangements, and his hand-picked performers who really make The Melting Pot delicious.