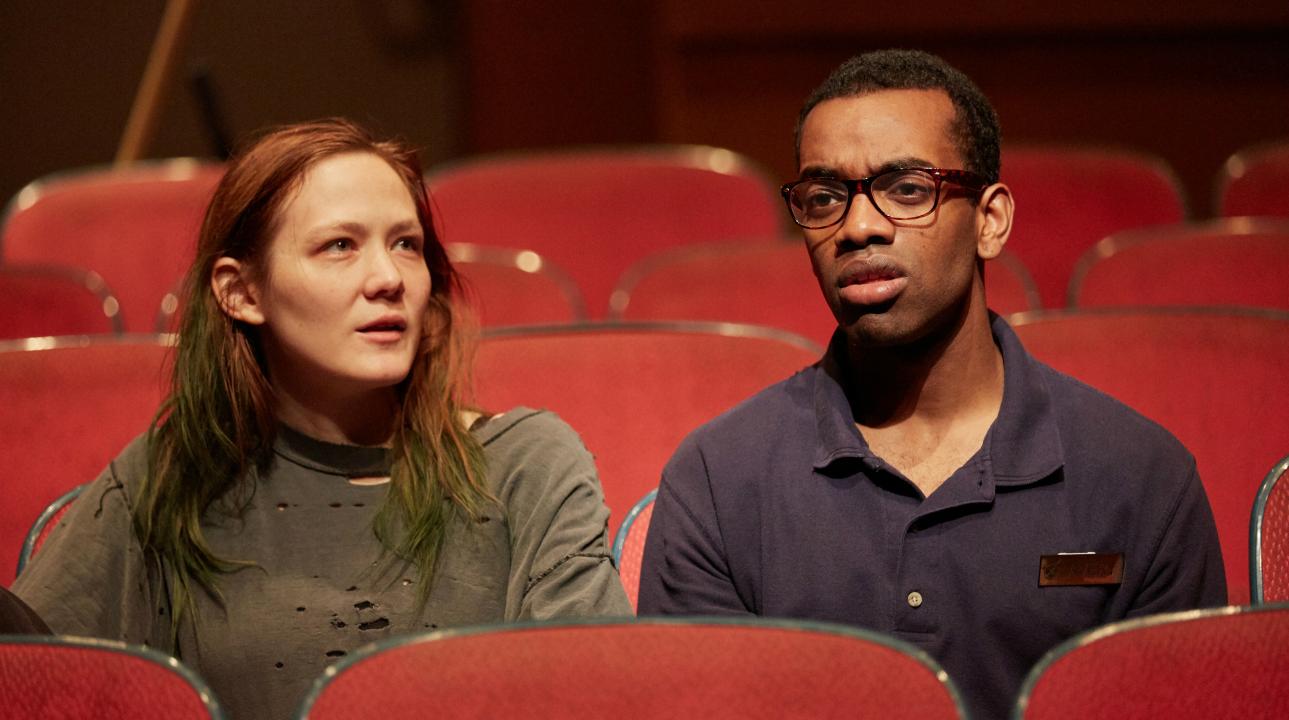 The Flick at the National Theatre

Annie Baker’s The Flick is of a radical theatrical style; it is new and maybe even profound. This is lofty description but it is a rare and wonderful thing when a play’s best moments consist in the absence of dialogue. With director Sam Gold and cast, Baker creates a genuinely new mode of storytelling. Undoubtedly, theatre has its master of pause—we all know Pinter made hitherto unknown possibilities in absences—yet the effects of the technique are purposed here more completely. The Flick is three and a half hours long including interval; despite an imperfect emotional depth, if it were longer I would have still enjoyed it.

Avery (Jaygann Ayeh) is a film buff working at a Massachusetts movie theatre, one of last that still projects 35mm film over the ascendant digital format. Fellow employee Sam (Matthew Maher) mentors him while projectionist Rose (Louisa Krause) drops in to break up their drudgery. The Flick’s programme notes reveal a curious emphasis: much is made of Avery’s insistence on 35mm over digital; however, this is the least interesting aspect of the play.: the projection debate amounts to a weak metaphor for Avery’s depression (i.e. the replacement of authentic with artificial). The potent aspect to be gleaned (and it directly concerns the play’s title,) is the structure of 35mm film: traditional film records 24 frames per second with interstitial black frames; the effect is the illusion of movement. There can be no movement without these empty frames, as these create the flicker (read: the origin of the term ‘flick’) necessary for the illusion. This, contrasting the first, is a somewhat better metaphor and not specifically for depression but for the sadness that all the play’s characters encounter, whether in disillusionment, jealously or alienation; all of this bad is necessary for happiness and direction. Above all others, the best analogy lies in the comparison of empty frame to theatrical pause: negative space is needed for a full understanding of character; the long silences add colour to simple, seemingly undeveloped dialogue thereby creating and enhancing the subtext. There is a great moment at the play’s end where Sam waits for Avery: with every five or so empty seconds our expectation of whether he will return reverses; despite a minute of silence and limited movement, there is more substance in that negative space than in whole monologues. Also, unlike in most plays, pause is not a mere vehicle of tension: in most instances, the silence is counterintuitively relaxing by releasing a natural stiltedness and awkwardness in the characters. There are not refined conversations because these are not refined people, yet the overall effect is lapidary: when it is taken in over 3.5 hours there are sharp feelings created. In this respect it cannot be understated how much Sam Gold’s direction succeeds: he comprehensively treats the pause, comedy and pathos with the care the script deserves.

The Flick is how the other half lives. The stage (nicely formed by designer David Zinn) is the audience section of a cinema. There is no screen; that is to say the set lacks the essential substance of the actual theatre. We are dealing with the negative space of the seating and the people who maintain it; without these people the experience would be impossible. What is so admirable about the play’s subjects is how efficiently it characterises them. Too often, playwrights mistake cursory phil-psych references and laboured backstory for meaningful characterisation. Save for the 35mm romance, motivation is clear: Avery, Sam and Rose are here because they need the money. This is most of their life and their interactions make it worth seeing through. It is easy for a bourgeois audience to sit down for an hour and get up unchanged; The Flick’s characters are lovely people hideously underpaid, so the three and a half hours function as a formal immersion in their world—this is not to say that the viewing experience is menial; the humour, though occasionally sophomoric, creates real belly laughs. I have a problem with London audiences’ appallingly low threshold for humour but this one delivers. Moreover, through hours of the same routine and environment the play creates a strong sense that these characters will continue working and living beyond our small viewing. Structure and humour reify them, although it is ultimately the feat of the actors that determines this.

Matthew Maher as Sam surprises with pathos. There is initial doubt as to whether he will amount to more than comic relief but Maher slyly proves us wrong. Of course, his timing is formidable and (coming from the Broadway cast) Baker must have thought it a miracle she could have someone deliver her comedy so well, yet with his lateral lisp and faux-haughty cadence Maher slowly reveals his Sam as pitiable yet fundamentally charming. As he assures us in his closing scene, despite quotidian boredom he is capable of real joy, which is something that most theatre cannot not assure. In addition, Krause makes an earnest, fallible Rose. She proves her authenticity in an instant by dancing to Jay-Z’s I Just Wanna Love U, a perfect and glorious impression of a bad impression of good dancing. Furthemore, Ayeh is a great Avery, though his sensitive portrayal belies a missed opportunity for the writing of his character. Though affable and unassuming, Avery suffers deep depression. There are moments of insight, like his fear of being a film buff though having never loved a film or, more poignantly, having never loved a good film; this is a welcome instance of his self-described inauthenticity though it is problematic: in order to tell us this fear he relays it to his psychiatrist in a phone conversation; the problem with this is that the conversation with an unknown character breaks Baker’s established style. You may wonder if it could have been told through conversation with Sam, though I suspect this would be too heavy for The Flick’s intended quirkiness. This suggests that Baker’s style only works so far: it may be enough to reveal a more cursory sadness like in Sam’s case but is not sufficiently developed to get across something more complex and acute; her pauses work well to indicate an internal dialogue though the external one does not go far enough. This is not a slight, though: a real exposition of depression is a high bar and one that even Hamlet strictly fails to clear.

Even its failings make me eager to see what Annie Baker can do. She deserves her Pulitzer Prize and deserves even more the praise of a London audience. She and Gold have made something new and for that you must see this play.

The Flick runs to 15 June at the National’s Dorfman Theatre.