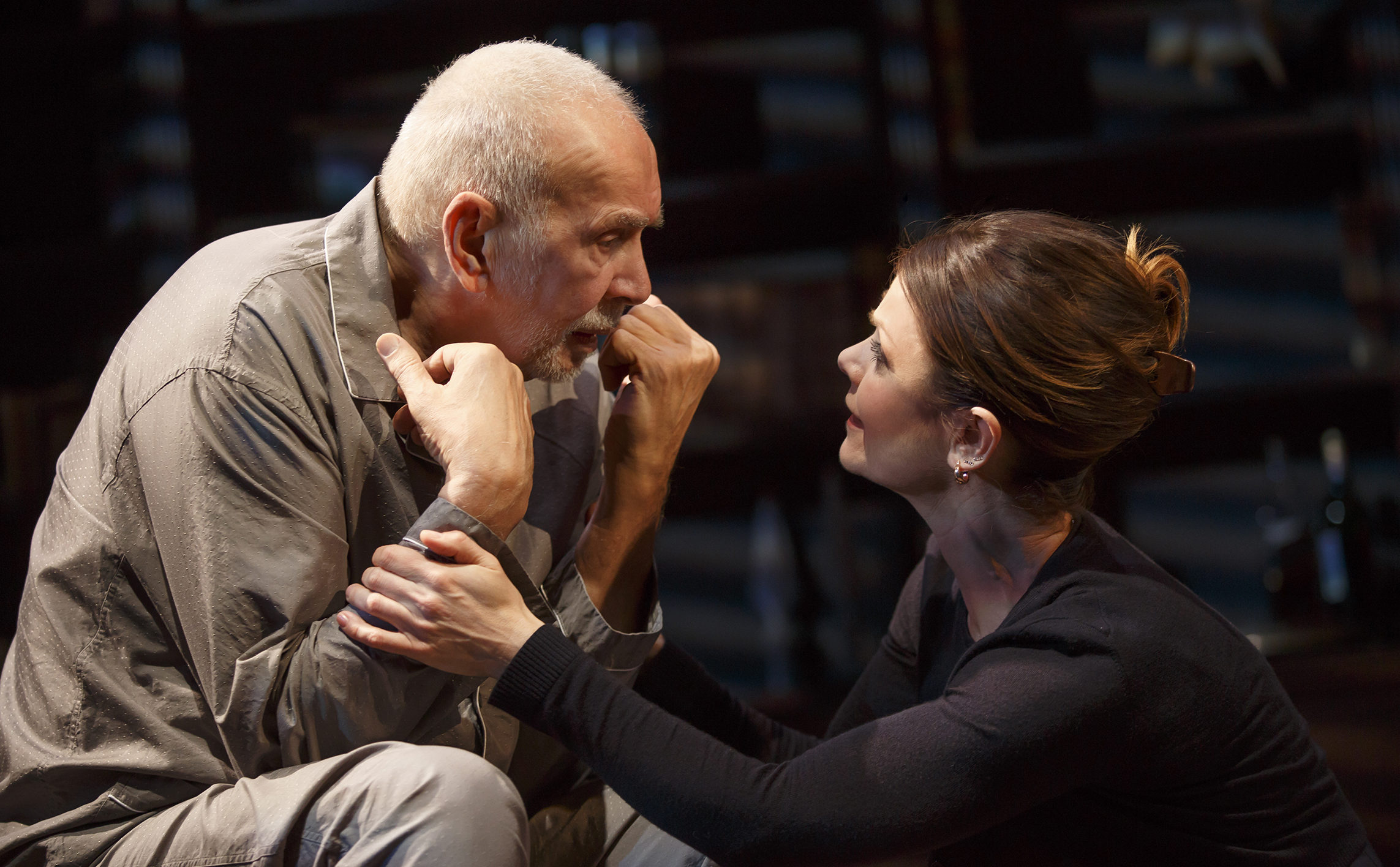 The Father: Now on Broadway

What happens when you can no longer trust the accuracy of your reality? When unfamiliar faces invade your home and parts of your life that you hold dear suddenly disappear? These are questions faced by the more than five million estimated Americans living with dementia. While a great many artistic works have been created from the point of view of individuals living with a person who suffers from some form of dementia, French playwright Florian Zeller’s The Father dares to explore the effects of this affliction from the perspective of a man who suffers from it. I say “dares” because creating a coherent storyline from such a perspective is undoubtedly difficult. However, the result is a sometimes-disorienting narrative filled with human intrigue that challenges perception and tugs on your heartstrings.

The Father opens with an argument between André (portrayed by the inimitable Frank Langella) and his daughter Anne (Kathryn Erbe) during which Anne chides her father for chasing off another household helper. Her father argues that the woman stole his watch, a prized possession that allows him to orient himself in time, but Anne discredits this theory by helping him locate the accessory. This is but the first of many lapses in memory for André who, both literally (through his conquests to locate his missing watch) and figuratively, begins to lose track of time. For example, in one instant, his unrecognizable daughter has brought in a chicken to cook for dinner, which her significant other carries into the kitchen and, just moments later, she is reminding her father that she is divorced and cannot fathom what chicken he is asking about. André watches as his daughter’s relationships fall apart and endures angry outbursts by Anne’s husband during which he physically attacks André. Or is the brutal man his daughter’s fiancé? Or her boyfriend? As time progresses, André must confront the fact that very little in his life makes sense and those that he has loved have seemingly left him to face a cruel and terrifyingly unfamiliar world – alone.

What distinguishes The Father is the remarkable way that the director, Doug Hughes, and the playwright unsettle the audience by allowing them to experience some semblance of André’s chaotic world. The storyline is punctuated by blackouts and lighting effects, which disorient the timeline and the narrative, but actors also portray multiple roles with some actors sharing roles – a creative choice that demands that the audience pay attention to context clues to orient themselves to the scene (much like André must do when orienting himself to the world). It is human nature to seek comprehension – to desire cognizance. Much like André, I found myself attempting to fill in the blanks of the action rather than allowing myself to follow where the dialogue led in order to resolve my confusion and alleviate my unease as quickly as possible. Sometimes my inventive notions were accurate and other times, not so much. It was not until a third of the play had gone by that I took notice of the transformations in the set as well. Vases moved. Pictures were hung and disappeared. Counters and bureaus slid out of view. The world literally transformed in a blink of an eye making the setting indeterminable at times (perhaps the work of illusion consultant Jim Steinmeyer). The frustrations of the audience compound, but they seem trivial when compared to the struggles of the main character.

The Father only falters when it strays from this dual “show and tell” narrative. When André is off stage, giving the other characters a chance to talk, the audience is re-oriented by witnessing conversations between the other characters. Unfortunately, these scenes undermine the singular nature of presenting the play from André’s point of view. Perhaps the playwright or someone on the creative team deemed the plot too difficult to follow without these detours, but the true brilliance in Zeller’s work is the point of view. Also, from a creative design perspective, Scott Pask’s scenic design does little to spark the imagination. The design fails to evoke the feeling of a French apartment, and the scenic transformations might be more unsettling if the stage was not so sparse to begin with. Moreover, Donald Holder’s lighting design outlining the stage has a bizarre quality to it. The flashing lights signal transformations between scenes (giving the stage crew an opportunity to alter the set and move props, no doubt), but I sought some deeper purpose in the lighting design and found none. It was as if the creative team just wanted to develop some sensory experience to distract the audience between scenes, which might not be quite so annoying had there not been so many scene changes in this particular play.

Leading the cast is Frank Langella, tackling a role that even a theatrical sage would struggle with. Langella’s performance prowess serves him well in The Father, which exacts an emotional toll on its lead – asking him to convey mental degeneration and to reset his emotional state constantly as André’s awareness and understanding of his environment changes. Moreover, Langella handles the devastating ending of The Father with remarkable fragility, which, quite frankly, is a state of the human condition that many actors fail to realistically express. Unfortunately, Kathryn Erbe’s portrayal of Andre’s daughter has little emotional depth, and Erbe never quite imparts the full emotional weight of her responsibilities to her father and the havoc that those responsibilities wreaks on her life.

For a theatregoer whose family has been touched by any form of dementia, The Father may not rest easy on the conscience. Yet, there is an importance to the perspective explored in The Father that should not be discredited or evaded in favor of comfort.