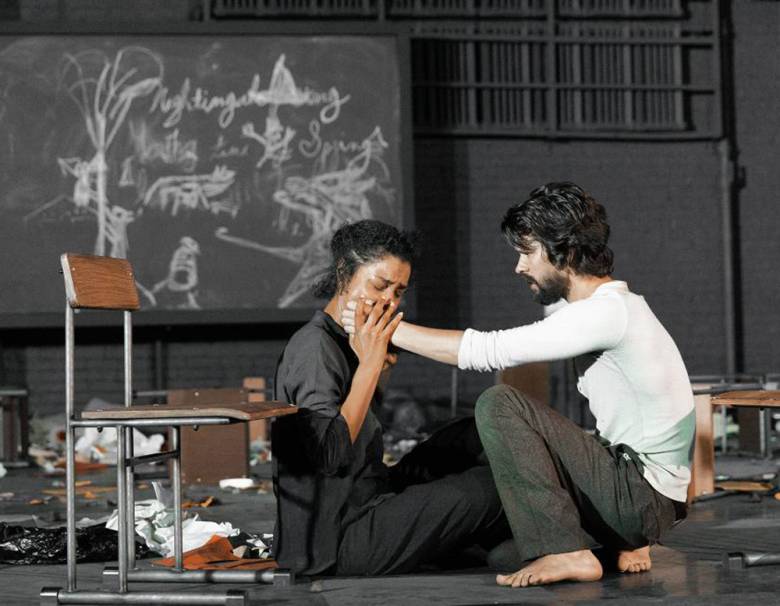 A Tamaskan dog prowls on a deserted set adorned with toppled student desks – a “wolf” relishing the eerie atmosphere (and undoubtedly sensing the unease of the audience members who missed the warning sign by the Box Office notifying them of the dog’s non-wolf lineage). Anyone familiar with director Ivo Van Hove’s recent work in Lazarus and A View from the Bridge will recognize his calling card immediately in the stark, modern set of The Crucible, awash with harsh florescent lighting. Last revived on Broadway with an acclaimed cast in 2002, Arthur Miller’s allegorical tale of McCarthyism set amid the hysteria of the Salem Witch trials in 1692 is infused with fresh life under the creative eye of Hove. Scary specters torment the living and man savages man in this reimagined production, but the horror of The Crucible does not come from these imagined spooks – rather, the true terror in Miller’s work is how often the maltreatment and hysteria present in Miller’s tale rears its ugly head again and again in our society: how very easy it is to launch a tormenting witch hunt by playing on a populace’s fear or anger.

For those unfamiliar with Miller’s time-tested narrative, The Crucible tells the story of John Proctor and his wife Elizabeth who find themselves named as perpetrators of witchcraft by a spiteful and lovelorn teenager, Abigail Williams, who, along with several girls in the town, have fallen “ill” from a mysterious malady. The local preacher suspects that witchcraft is to blame and his suspicions are bolstered by powerful religious and political outsiders who set up hearings to examine the accused and cast judgment upon them. Ultimately, dozens of innocent men and women have their names raked through the mud. Others hang for their non-existent crimes. After the validity of the proceedings are called into question and the accusers flee into the night, never to be punished for their false accusations, the men who championed the ill-conceived hunt leave town and a weak community is left behind to try and reclaim some sense of normalcy in the wake of the horrific acts committed during the trials.

What defines this Crucible production is the visceral creative design of the show that compliments the intellectual subject matter. Jan Versweyveld’s set and lighting design are minimal yet striking, and Wojciech Dziedzic’s earth tone color-palette for the costume design strikes a balanced minimalist meets modernist visual effect. In totality, the design suggests that the play could be set at any point in time in America’s history: past, present or future – an allegory ripe for interpretation by an audience that may not be familiar with McCarthyism but that has witnessed the miscarriage of justice in the United States at other times and in other ways. In many ways, there is an ease in viewing The Crucible as strictly a historical work – either as a dramatization of the Salem witch trials or, for those familiar with the subject matter, of the McCarthy hearings of 1954. Yet, the creative choices in this production constantly challenge the notion that The Crucible is bound by historical precept without manipulating the language of the play. The afflicted girls don recognizable schoolgirl outfits, industrial size florescent lights swing from the rafters, and transfixing digital projections dance along the chalkboard in the background. The world that develops on stage is not strictly the world of 1692. Or 1954, for that matter.

The only aspect of Hove’s staging that is questionable involves the legitimacy of the afflicted girl’s claims. Specifically, during one tense sequence, an otherworldly event occurs where paper is blown about the stage and a light crashes to the ground as the girl’s writhe in torment. The very foundation of Miller’s tale depends upon the lack of veracity of the girl’s claims – the fabrication of their devilish charges against hard-working men and women who are, at the most, guilty only of thinking and behaving differently from other members of their community. Hove’s choice to incorporate unnatural staging choices like the scene previously described may send shivers down the spines of some theatregoers (especially when coupled with a creepy original score by Philip Glass that is piped into the theatre), but their role in the narrative is head-scratching.

The casting in The Crucible smartly compliments Hove’s contemporary vision, including the alluringly intense Ben Wishaw starring as John Proctor and the emotionally intelligent Sophie Okonedo crafting a formidable Elizabeth Proctor. It is during the final scene with the Proctors on the verge of emotional, social and physical annihilation that Wishaw and Okonedo reveal the depth of their talent – Wishaw’s John Proctor visibly breaks down and rises like a phoenix to face his own mortality while Okonedo’s Elizabeth adopts a breathtaking steely resolve. Saoirse Ronan portrays the detestable villain (one of several in the play) Abigail Williams, a young seductress who manipulates authority to attack those who have wronged her, with admirable fury and fervor. She is a believable leader with an ignorant mind but a passionate soul. Back on stage after his stint as Claudius in the Barbican’s recent production of Hamlet starring Benedict Cumberbatch, Ciarán Hinds joins The Crucible as Deputy Governor Danforth – the epitome of unjust activity by the hands of power. Hinds expresses confidence in his role, although, unfortunately, his performance reminded me greatly of his performance in Hamlet (which is, to say, somewhat lackluster).

Although perhaps challenging in subject matter and length, clocking in at nearly three hours, Hove’s new production of The Crucible is a play for a modern era, stylistically enlightening with frightening undertones and featuring a captivating young cast. The Crucible joins the ranks of the must-see stage productions on Broadway this season.

The Crucible will play at the Walter Kerr Theatre until July 17.