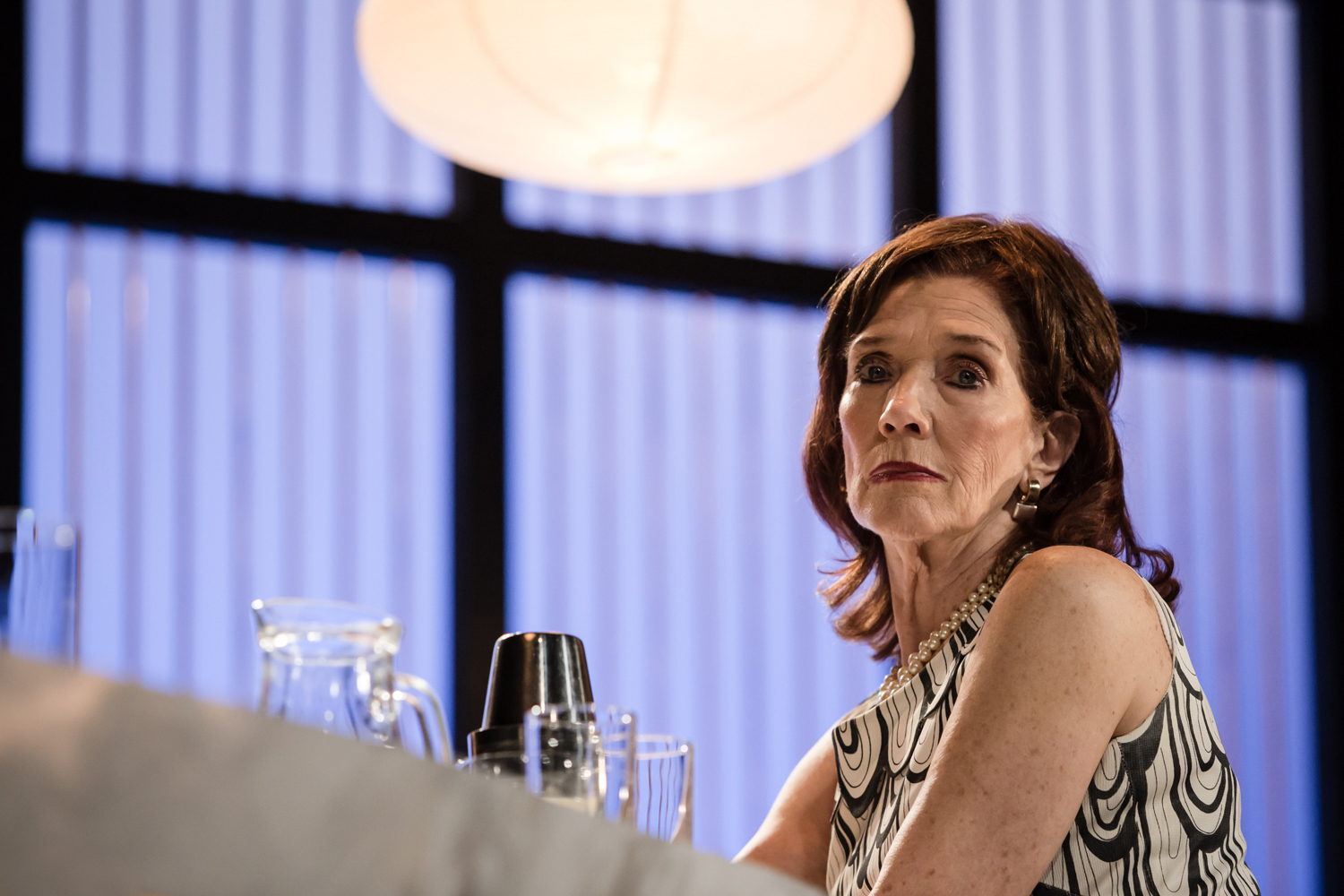 There are similarities between this play and the school of naive art: both are flawed, though so conspicuously it must be intentional; yet, unfortunately (and often), this intention is to make a point so obvious the artist’s recourse to bad technique wastes the good. While I cannot speak for the naive artists, In the Bar of a Tokyo Hotel’s flaws preclude the great writing Tennessee Williams was capable of. In a bar sits Miriam (Linda Marlowe), a well-lived hedonist who tries to seduce her barman (Andrew Koji) though her experimental artist husband Mark (David Whitworth) disturbs her joy, believing he is on the breakthrough with his novel interpretation of colour.

The flaws are clear: Mark is a half-intelligible rambler; Miriam is an Ugly American trope; the Barman is underused (although there is merit in him being a passive observer to the play’s limited action). Via director Robert Chevara, we further sense falsehood: awkward pauses persist between interrupted dialogue and grand movements, like Mark falling down, are done with bizarre calculation. The play is a narrative of an artist desperate to escape such falsehoods and reach new frontiers of art: in this, it relates the realism-versus-idealism struggle that Williams tackled so well in his prime; however, here, by confronting inauthenticity so explicitly, the play loses the human element that brings the struggle to life. With the main characters as mere vessels of Williams’ self-doubt, there is not much else to engage us. The play’s response makes Miriam as funny as possible and Marlowe delivers these lines well, even if their content is blue and unbearably written, though this humour is not enough: Mark’s ramblings soon dominate the plot’s concern. The rest is hopeless and obvious.

The play’s contradictory programme notes reveal another view of its action. I say contradictory because they simultaneously belittle biographical interpretation—‘When will we stop paying attention to Williams’ life and pay attention to what he wrote?’—though rely on it in discussing the playwright’s Japanese influences. They note Williams’ friendships with Yukio Mishima and his introduction to the exaggerated forms of Kabuki and Noh. With these influences in mind it is easier to understand the playwright and Chevaras’ aversion to realism. The problem is that realism ultimately drives the ideas of Williams’ plays and his new appropriation of Japanese form is shallow. While the acknowledgement that authenticity can be reached by a non-Western theatre form is appealing, its execution is weak. Much like its characters, the play is stuck in a foreign territory though cannot escape its Western essence. Following my initial analogy: in the same way the perspectiveless landscapes of the naive artists reference the early Medieval period, so does this play in borrowing traditional techniques from an older time. Notwithstanding, both fail to add anything new with appropriation.

Chevara’s production of In the Bar of a Tokyo Hotel cannot reclassify its source away from that of artistic failure. The cast perform admirably with what they have, though when the play is ultimately Williams’ self-inserted breakdown there is not enough to enjoy; for a play that is set in 1969 it lacks the revolutionary quality it so fervently contemplates.