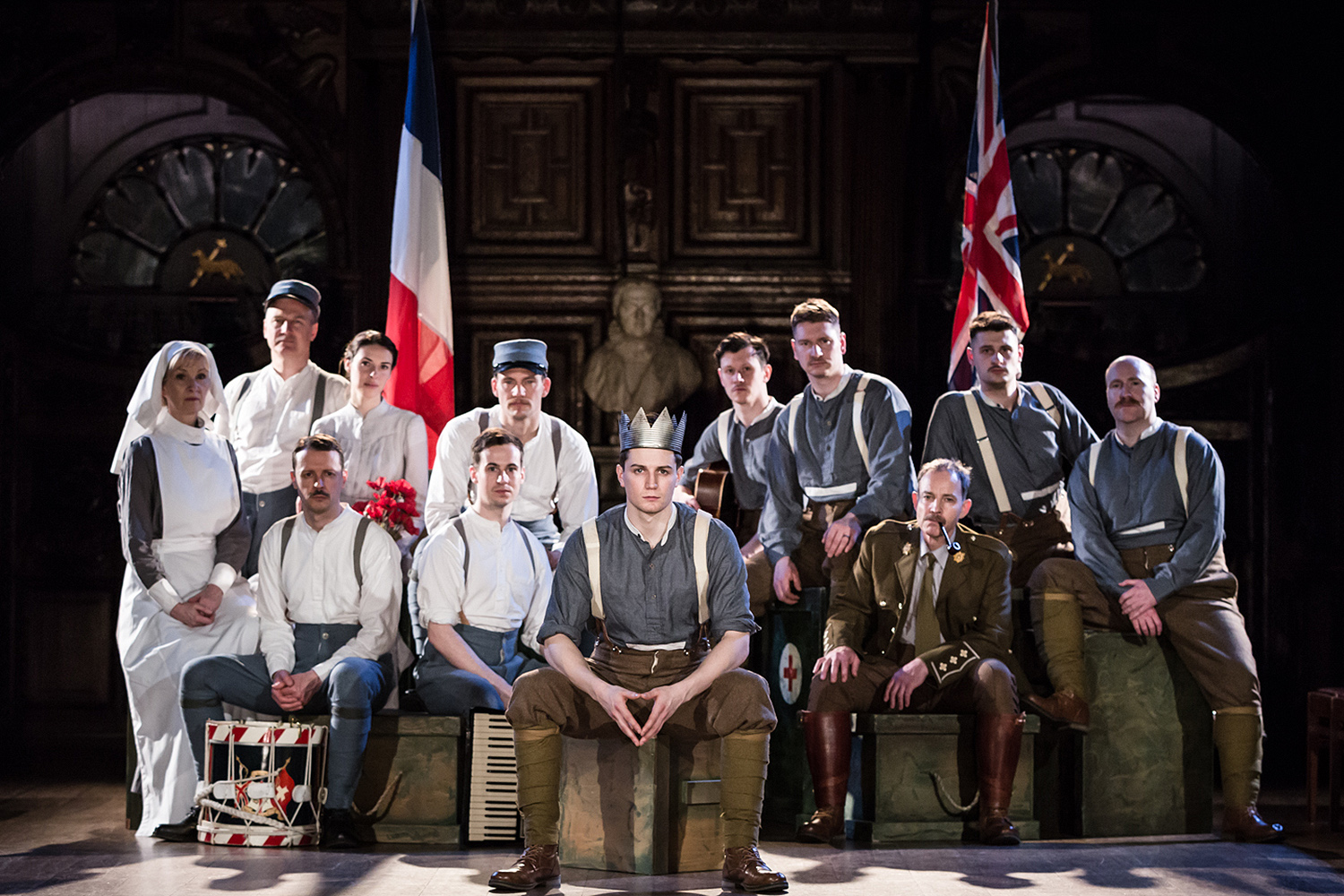 It is impossible to love war in the 21st century, so it is a marvel there is empathy in a play so bellicose as Henry V. Performed in the regal Middle Temple Hall, home of Twelfth Night’s inaugural staging, Antic Disposition’s production receives the benefit of intelligent framing and casting. Shakespeare’s history tells us of a grown Henry called by his counsel to instigate a war with France, only to encounter a testing experience at its final battle. Why, then, is this production set in the Great War? Allow to me explain.

Henry V’s framing enhances the play in unforeseen ways: directors Ben Horselen and John Risebero start the play with a wounded French soldier saving a wounded English soldier. The Englishman, as thanks, gives the Frenchman his only book, a copy of Henry VI, and receives an indignant though apt response. However, upon understanding that the gesture is one of kindness rather than affront, he calms and befriends his ally. Alongside a band of convalescing infantry, these soldiers perform the play. This setting works because the disjunct of allies becoming enemies shows the essential arbitrariness of war: men who killed each other now kill others with each other and those others will subsequently become allies; it is a pitiful cycle, and one that perfectly mirrors Henry’s doubt in his long night before Azincourt. Henry’s introspection is a result of viewing the toll his ambitions have on the common man and that, despite the so-called glories that his advisors promised him, the only success in war is comradeship, much in the same way the Englishman’s kindness overrides the Frenchman’s nationalist anger. One of the more subtle feats of Horselen and Risebero is that their setting transforms the play’s usually twee ending into a somber conclusion. Whereas Henry and Katherine’s short courting is individually cloying, its placement in the war narrative adds a sense of desperation, as though the soldiers and nurses are desperate to milk their remaining joy before combat resumes. There is also merit in the decision to stage Henry V in Middle Temple, a fount of the law’s development which would eventually aid the end of absolute monarchy, adding to the melancholy of the king’s condition (the hall’s massive central portrait of Charles I is therein ironically compared to the play’s monarchical centre).

The play’s cast has no weak element, and Freddie Stewart is glorious in his portrayal of Henry. What is so remarkable about Stewart’s character is that he achieves glory without bravado; although a self-doubter, every line of Henry’s rousing speeches is genuine. He projects a thoughtfulness without being entirely crippled by that same thought; while he often physically stoops—as though he bears his country’s people on his own shoulders—he is upright and angry when his soldiers need him. For this Henry, the ‘breach’ is as much in his own mind as symbolic of the battlefield. Regarding the rest of the cast, it was a sleek choice to have mostly French-speaking actors as the French, making scenes like Katharine (Floraine Andersen) and Henrys’ confusing courtship that much more believable. Although I had the initial fear of the oft-dense dialog being muddled through accents, this was no problem as each actor had great diction.

Although delivery is not a problem, the only apparent flaw in the production is a minor technical one: with traverse seating in a somewhat cavernous hall some of the lines, especially in the beginning, are lost. (As a digression, the six songs that permeate the narrative, though well-harmonised and undistracting, add little to the play’s dynamic.)

I would urge you to see Henry V. Unconventional framings in Shakespeare are so easily maligned or unnecessary (remember last year’s Hamlet?), yet Antic Disposition’s production is an example of it done very right. It is a bold interpretation with an excellent cast, and it should be commended for its risks.