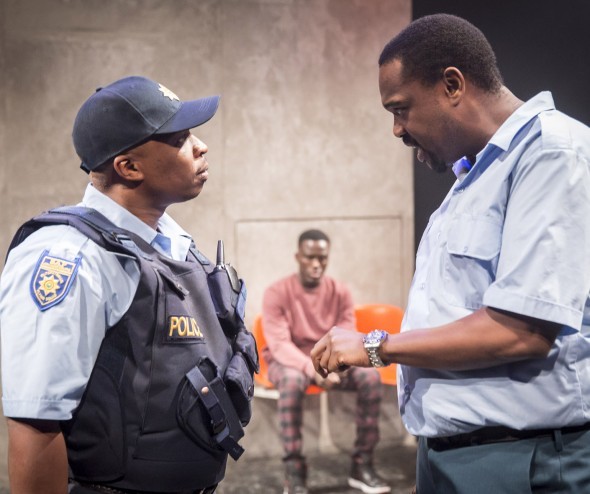 I See You at the Royal Court Theatre

It is always stimulating to see drama from an area that British theatre usually does not touch. Post-apartheid South Africa is perfect center for such drama, investigating the tension between what was fought for and what is. Mongiwekhaya has used this tension to create I See You, a play that has much to say and yet says too little. Ben (played by Bayo Gbadamosi) is a law student detained by the police on suspicion of taking drugs while driving. Ben is wealthy and fails to speak one of the country’s native languages, Xhosa; the policeman in charge of him, Buthelezi (Desmond Dube), does not take this peacefully being a former freedom fighter.

See You’s strength is Buthelezi, a perfect villain in that his motives are understandable, even more so than those of the protagonist. The censure of his culture’s loss and wartime PTSD combine to make a terrifying yet perversely reasonable creation. This is taken to exponential heights with Dube’s portrayal, whose commanding intonation and austere manner give each of the character’s actions, even torture, a disturbingly respectful quality about them. This contrasts to Ben, whose implausible responses to his predicament garner him no sympathy. His blandness serves as a foil to Buthelezi’s humanity. Gdabamosi’s delivery also falls to occasional cringe, particularly the titular line, when the character undergoes an out-of-body examination of his antagonist’s true self.

While the primary struggle is a spiritual fight to regain lost culture, the subplots are mundane by comparison. With the exception of the remaining police staff (Sibusiso Mamba and Lunga Radebe), any scene involving Skinn (Jordan Baker) seems like a wasted opportunity. While her modern street-smarts would be at home in their own play, the character’s presence feels like a constant intrusion; her connection to Ben is so tenuous as to be incredible, with her willingness to risk life and limb for the first rich boy she could find to provide her a home.

There is a pleasing naturalism to the way Noma Dumezweni directs the actors. The three-quarter-in-the-round space is ideal to experience the physical scenes, particularly Ben’s torture, which is present enough to us yet not so close as to overwhelm.

It appears undeveloped at parts, yet what I See You promises is a slew of new, relevant theatre from South Africa.