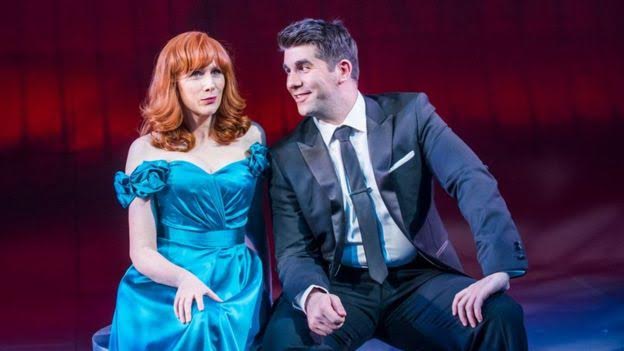 The songs are conventional, the punchlines predictable, and the plot utterly bonkers, but there is something about Miss Atomic Bomb that ticked with me, making it quite an enjoyable, if not flawed, new musical. The show certainly has its problems and is unlikely to stand the test of time, but its charm and almost innocent style allows it to get away with what it may otherwise have been chastised for.

Set in 1950s Las Vegas, the show surrounds the real life atomic bomb trails that took place in the Nevada desert and the unlikely tourism this brought to America’s City of Lights. Following the interlocking lives of a rural sheep farmer, runaway soldier, and incompetent hotel manager, the musical plays heavily on the stereotypes of its setting, be that communist-hating soldiers, clueless hillbillies, sassy showgirls, or angry gangsters.

Throughout, the show has its tongue firmly planted in its cheek, featuring songs about dead sheep, accounting clauses, and the Cold War. Some of the humour works well with a number of laugh-out-loud moments and well-delivered jokes, but on too many occasions the punch lines fall flat despite the efforts of the talented cast. For the most part, directors Bill Deamer and Adam Long present the piece eloquently, allowing the humour to remain raw and not overstretching the jokes. They have a clear understanding of the book (though this is unsurprising as Long was a co-writer) and it is abundantly clear that few others could deliver the material in a more accomplished way. As it progresses, some of the plot ideas start to run thin and the melodrama begins to irritate and repeat itself slightly but, despite these failings, the show remains polished, professional and stylish throughout.

The music, while pleasant, is not memorable or original but rather feels generic and poppy. It is difficult to deny that the score, heavily influenced by country music, is not catchy, it just sadly fails to provide anything particularly interesting or new. The songs are performed with gravitas, however, by the very capable cast, most notably Florence Andrews and Dean John-Wilson who put in commendable stints as the protagonists. John-Wilson is given the freedom to show off his wonderful falsetto while Andrews proves her worth during ‘The Sun Went Down’.

Catherine Tate and Simon Lipkin embrace the humour of the show and really deliver in their comedic roles while avoiding the temptation to slip into silliness. Tate’s impressive quips and mannerisms occasionally mirror some of her sketch show characters that are known and loved, and she lifts the action when on stage. Similarly, Lipkin is a fine character actor who comes across as very likable and it is clear he has a talent for comedy.

Deamer’s choreography is slick but fun and encapsulates the 1950s style wonderfully. The chorus, all of whom also feature as smaller parts, do a tremendous job with this fast-paced musical, throwing heaps of energy and passion into the show. The production is meant to be cheerful and taken lightly and all of the cast do a fine job of encompassing that message and putting the audience at ease with their bright and bubbly performances.

Miss Atomic Bomb will not be to everyone’s taste and is likely to split opinion with audiences. The cast are very strong and despite its problems there are a number of good things to take from both the book and score. Using the crudest measure possible, if you leave the theatre with a smile on your face, then by and large the musical has done its job, and I left the St James Theatre with a smile on my face