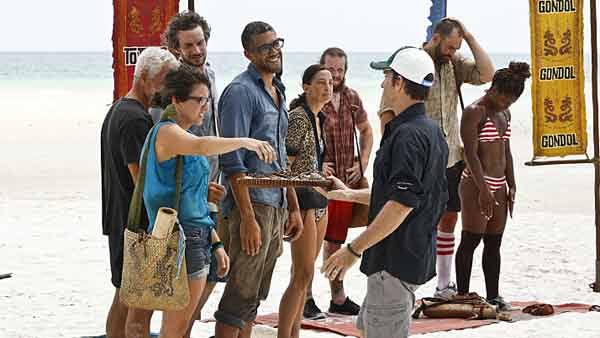 Kaoh Rong: At the Swap

Before we dive into last night’s episode, let us take a moment to remember the Beast Mode Cowboy that was. I’ve always thought Caleb was great TV and predicted after episode one that Survivor was likely more his game than Big Brother. Sure enough, he was killing it. He was never going to be an underhanded power player like the legends but his social game was perfect and you don’t have to be an underhanded power player to still be considered a good player if you’re playing from the front (we all love Jeremy but that was a social win, not a strategic one; nothing wrong with that). I didn’t see his med evac coming (my money was on Cydney), but I should have; the man doesn’t understand limits.

He’ll be missed but what’s particularly interesting is that, without Caleb’s evacuation, we’d be looking at a completely different game right now. With a swap at 14, two tribes of 7 would have included 6 Beauties, 5 Brains and 3 Brawn. With the Brawn-beach twist the producers cooked up to solve the problem of swapping at a post-med-evac uneven number, two tribes of 6 were instead created from a breakdown of 4 Beauties, 5 Brains and 3 Brawn. Julia pulling the red buff that sent her to 3 days of isolation meant Caleb’s elimination caused not just one but a two-person deficit from where the Beauties would have been going into the swap, putting the fractured Brains tribe in a position of power they otherwise likely would not have had.

As the season progresses, I find myself rooting for a lot of people but, with Caleb gone, the Beauties aren’t really among them (though I still have a lot of faith in Julia. I don’t know why, but I do). So, though their bad luck going into this swap is a tough blow, it prevented them from easily sweeping out the more interesting players so it might ultimately serve the season well.

Over on the new blue tribe we have the even breakdown of the two best Brawn players (Jason and Cydney, both serious frontrunners, both awesome characters), the two worst Beauty players (Nick might be able to step it up in future episodes but Michele is thus far forgettable) and the two best Brains players. The latter we understand to still be working together though smartly keeping their distance. Neal is my favourite player on the island at the moment and, before the swap, we saw him grab the last available idol (with far less fuss than the other two; read into that what you will). Debbie- the season’s breakout character who is refreshingly as strategic as she is wacky- is playing incredibly hard but hopefully not too hard. I hate to root against perfectly innocent Michele but if the Brawn swing votes don’t choose the Brains side in this 2-2-2 matchup, I fear the season will never recover. That said, if the Brawns do choose the wrong side (which would be the right side for them, the wrong side for good TV), I could see Neal and Debbie using the idol to actually flip the game rather than just save themselves (I’m so tired of people holding onto the idol to just buy themselves an extra week; it puts too much focus on the luck of finding it rather than the smart use of it).

The yellow tribe is more interesting with a 3 Brains, 2 Beauties, 1 Brawn breakdown and the promise of Julia joining them since they lost the immunity challenge. Though the Brains that are on this tribe together are an absolute mess (all three the beta members of their earlier sub-alliance pairing, though don’t tell Peter I called him the beta), they’re likely to stick together until Joe just can’t take it anymore. Identifying Tai as a provider (though I hope it had more to do with identifying Tai as a strategic non-threat), they set their sights on Anna to keep the Beauties from gaining a numbers advantage when Julia arrives from Brawn beach (also known as Angkor beach, also known as hell).

For one brief moment, it seemed as though Tai would play his idol to save Anna and vote out Peter. If Anna had been the player we were all giving her too much credit for being (we really need to stop putting so much stock in poker players), she would have jumped on that opportunity and explained to her teammate how his anti-Peter whim could actually manifest itself as a massive strategic move, flipping their 2 Beauties + Scot vs. 3 Brains situation into a 3 Beauties + Scot vs. 2 Brains situation when Julia fills Peter’s empty spot after tribal. Alas, it appears that the longer term numbers ramifications of such a move were never clarified for Tai, a character so delightful that we’re all absolutely determined to see him as a player far beyond what he is, because his mind was able to be changed by Scot Pollard who, of all people, might have had the best strategic episode of the lot. So Anna goes home, cementing the Beauty tribe’s massively changed fate in a post-Caleb world. Anna (who was getting on my nerves by the end) was the presumed leader of the girls alliance that looked like it could go all the way. I’m not convinced she necessarily was the leader since there was heretofore nowhere to lead anyone but, either way, it’s a blow that leaves Julia and Michele in a tough spot. I’m hoping for a Julia/Tai/Scot team-up next week that maybe capitalizes on the Joe/Peter rift to take out the handsome doctor and leave Aubry blowing in the wind.

Follow us on Twitter throughout the season for all my official post-episode #SurvivorRankings (part winner picks, part favourite players) every week. But rather than rehash this week’s list in more detail (hint: there’s a Brain in the #1 and #12 spots), I thought it might be fun to lay out my dream version of where this season could go from here.

So, if I was writing this thing…

Final 12: Blue (who cares about tribe names) loses again. Julia and Tai deploy Scot (whom the Brains seem to think is with them) as their spy to find out which of them the Brains plan to vote for. Tai plays his idol and Peter goes home with three votes. Julia finds the replacement idol.

Final 11/10: Yellow loses the next two immunities. The temporary voting bloc of Neal/Debbie and Jason/Cydney systematically takes out Nick then Michele. Tai hopefully does some funny things to make these episodes not hopeless boring.

Final 9: Jason convinces Cydney to betray Debbie/Neal to create a final five deal with the now-tight Julia/Tai/Scot group and they blindside Joe.

Final 8: Neal uses his idol on Aubrey, cancelling Jason/Cydney/Julia/Tai/Scot’s votes. Neal/Debbie/Aubrey vote for Jason. Julia combines her idol with Jason’s and saves him after the votes are read. On the re-vote, the former Brains vote Julia and Cydney secretly joins them to force a 4-4 tie and save Debbie. Deadlocked, Cydney/Tai/Scot/Neal draw rocks. Scot loses.

Final 7: Cydney tells Jason it was Tai who voted against Julia to force the tie. Jason leads a witch hunt and Tai is voted out 6-1. Two of the three replaced idols are found by Neal and Cydney.

Final 6: Julia makes a plan to stage a fake fight with Cydney who then infiltrates the Brains alliance and tells them Julia has an idol so they have to split the votes. Suspicious of Neal’s idol, Jason/Julia/Cydney vote out Aubrey 3-2-1.

Final 5: Neal plays his idol on Debbie. Sensing danger during the voting, Jason asks Cydney to play the idol he’s pretty sure she has to save him. She plays dumb. Jason goes home.

Final 3: Cydney wins final immunity and brings Julia with her to final tribal.

Final Tribal: Jason asks Julia to outline how her game was better than Natalies White and Tenerelli; Cydney slams him for underestimating Julia based on age and gender. Julia owns up to every bit of backstabbing and plays to the jury’s egos by citing saving Jason (and besting Neal’s idol play) with the super idol as a key turning point in the game. Neal declares Cydney the toughest castaway ever on the show. The vote is 4-3; it doesn’t matter who wins. Debbie’s jury speech goes down in history.