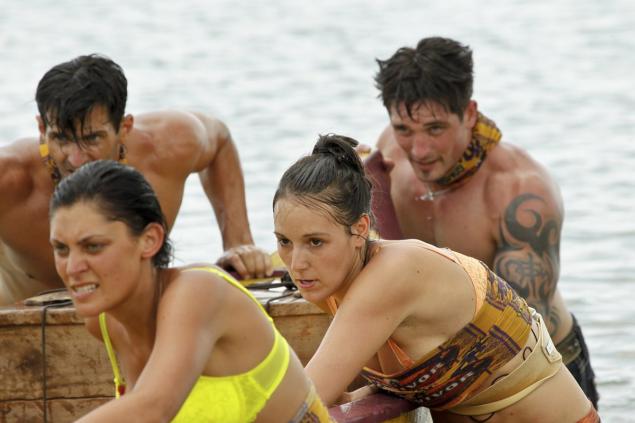 The new season of Survivor is here and, coming off of Second Chance, expectations are fairly low. But the first episode revealed a killer new cast who just might be able to turn this thing around, despite looming med-evacs and weird time traveling (this season was filmed before Second Chance so it will likely feel like a step back in game evolution).

Grouping the 18 castaways into the proven Brains vs. Beauty vs. Brawn format promises interesting clashes as the players both embrace and rebel against their producer-given labels. So far, I’m psyched to see expectations thwarted by the Brains coming out on top and Brawn coming in last in a gruelling first challenge. Back in the brilliant original BBB season Cagayan, the Brains got trounced in pretty much every challenge and Brawn went on to win the season (though Brains did produce the most all-stars with half the tribe returning for Second Chance) so I’m happy to see this season setting itself apart already.

The Brains actually look pretty good with a lot more coordination and muscle than expected and both Joe and, especially, Liz are among my early favourites, but I do think this tribe is the most likely to be plagued with in-fighting as the season progresses. Both Debbie and Aubry are likely to annoy the others while Peter and Neal are already showing signs of know-it-all-itis. Peter, especially, I think will flame out when his ego traps him in that deathly “leader” spot. Neal seems like he has a good head on his shoulders and a strong sense of the game. If he can keep his opinions to himself and avoid alienating his team, I have high hopes for him.

The Brawn are already in trouble, and I don’t say that because they lost the first challenge (though that doesn’t help). Though this group has a bunch of promising players, the decision to vote out Darnell first over weak link Alecia is mindboggling and points to some weird priorities. Something must have been left out of the edit because voting out a strong physical player and helper around camp because of an isolated challenge mistake in episode one just doesn’t track.

I actually think The Beauty tribe is the most interesting so far. I see good things from all three women on this tribe (especially Julia who I think might be here to rewrite the word on really young female players) and, yell all you want in the comments but, I’m really high on Beast Mode Cowboy right now. More on him in a moment but I think Survivor might be his game. So far the Beauties seem to be working really well together without falling into the cattiness we all expected (especially between Caleb and Nick). I found myself rooting for them in the challenge because nothing pisses off smart and strong people more than being beaten by the pretty people, and I enjoy seeing the cocky kids knocked off their high horses.

Follow us on Twitter throughout the season for all my official post-episode #SurvivorRankings (part winner picks, part favourite players) every week but here’s the first batch with some explanations that wouldn’t fit in 140 characters.

1. Jason: this guy’s name is actually Kyle Jason but Survivor has decided he’s a last name guy, even though that’s incredibly confusing because his last name is a first name. Regardless, he appears intense in a Tony way, cutthroat in a Russell way and dangerously charismatic in a Rob way. If he doesn’t do well, I’d be shocked (but, then again, I never would have put money on Darnell going first so who knows).

2. Liz: this Brains tribe beauty was a Fishbach recruit but I would have liked her a lot even if I didn’t know that (guys, can we talk some more about how dreamy Stephen Fishbach is? No? Okay, fine). She seems to have a clear head, her finger right on the pulse, and she’ll likely fly a bit under the radar at least at first. My top female pick in a season of seemingly pretty strong women at a time when Survivor could really use a new class of great women (Wentworth can’t do it alone).

3. Julia: controversial pick, I know. Julia’s only 19 and that usually means she’ll ride some coattails at best but I see something in her (and it’s not just because she’s repping my alma mater BU). I don’t know what it is yet but let’s just call it instinct. I want to see these Beauty girls team up, drag loyal puppy Caleb along with them, and run this thing. It’s not likely, but wouldn’t that be So Great?!

4. Neal: I feel like this guy’s going to blow up his own spot but, if he can hold it together, I think he’s got a good handle on how to play this game.

5. Anna: the more obvious pick for a breakout Beauty, Anna’s a poker player who scored by not being put on the Brains tribe (she can thank Liz later). Yet more high hopes.

6. Joe: please don’t med-evac the old guy! He’s tough and smart and I want to see some cocky young idiot like Peter go down as healthy, hearty, 72-year-old Joe watches and laughs (to himself, because he’s playing it cool, of course).

7. Jenny: that bug-in-the-ear nonsense was brutal (surely medical could have helped at least a little!) but Jenny vibes like Kelly Remington from Worlds Apart– stable and strong- just hopefully slightly more interesting.

8. Scot: I usually am bored by the pro athletes but I’m really into Scot. He’s shockingly well spoken and seems really reasonable (despite being a leading force behind saving Alecia). I’m all in on Scot.

9. Caleb: I was skeptical since this Big Brother alum is definitely an air-time chaser rather than a real gamer but he had a really strong first episode that reminded me of how well liked he was on his last time out. Survivor is a tougher game physically but a lot simpler strategically than Big Brother so I predict he could really make this work. He took direction well while building the shelter, worked hard, is good in challenges, so far doesn’t seem to be creeping the girls out at all and handled the “I was on Big Brother” reveal perfectly (played it down but didn’t deny it and the girls know he was known for his loyalty- so far the whole thing seems to be a point in his favour). I’m giving Beast Mode the benefit of the doubt, for sure. Again, I want those girls to grab him early and lead him Derrick-style to water, like a reversal on Russell’s “dumb-ass girl” strategy.

10. Michele: jury’s out still but she’s the final piece of that Beauty alliance I’m rooting for.

11. Cydney: so far she seems reasonable and strong but the body builder seems like she has a hot temper (always an annoying trait on Survivor) and she’s one of my top choices for a med-evac since she’s likely accustomed to all sorts of vitamins and supplements her body will have a hard time living without.

12. Tai: he seems sweet but he showed zero game-awareness when he went looking for the idol so obviously so early. A natural outsider miscast on the Beauty tribe, he needed to win trust early to not be an easy first boot when they lose. He could still win them back (especially if one of the other guys implodes) but I suspect Tai was a go-far or go-home guy and I think he’s going home (or at least I kind of hope he is because I’m rooting for the girls on that tribe and their smartest move is to go with Caleb).

13. Nick: cocky as hell but smarter than he seems, Nick’s the real gamer of the Beauties and needs to be sent packing FAST. So far he’s tough to root for but he could prove a great player if the ladies let him get that far. I hope they don’t.

14. Debbie: this lady has all the tools to be a killer player but she talks too much and no player, especially no female player, who talks too much ever does well. The sympathy she showed Aubry during her meltdown bodes well but, unless she has a Holly Hoffman-esque turnaround and the rest of the Brains tribe falls apart around her, I wouldn’t be putting my money on a woman who keeps so few cards close to her chest.

15. Peter: Nope. No. Ew. The Obama lookalike ER doctor is super hunky but he’s so full of himself I could scream. As far as I can tell, he’s not great-gamer cocky like Boston Rob, more blinded-by-self-love cocky.

16. Aubry: I was sure I would like this quirky Brain but her day two meltdown was pathetic and so far she’s really annoying and nothing else.

17. Alecia: WHY ON EARTH WOULD YOU KEEP THIS WHINEY, USELESS PERSON OVER DARNELL?! I really need to see more behind-the-scenes stuff from that beach because this seemed Crazy from people who don’t, otherwise, seem all that crazy.

There are a lot of really promising people out on that beach. Here’s hoping the twists and overall gameplay don’t let the casting department down.