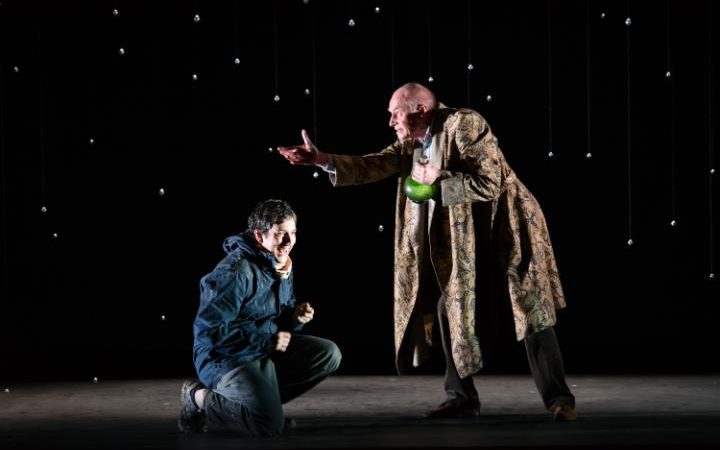 From book to stage: bringing The Devil Inside to Canada

The genie in the lamp meets his match in this operatic adaptation of Robert Louis Stevenson’s 1891 short story The Bottle Imp, a morality tale (or perhaps morality thriller) about a bottle whose magic grants limitless wishes to its owner – but with, if you can believe it, a price. A co-production of Scottish Opera and Music Theatre Wales that opened in Glasgow earlier this year, and brought to Canada in collaboration with Tapestry Opera, the piece is a small-scale but fervently scored affair. Writer Louise Welsh has moved the story from Stevenson’s late nineteenth century milieu to the contemporary world, with a slightly predictable emphasis on high-flying finance players and their inevitably corrupt and hedonistic aspirations.

We begin on a mountain peak (creatively implied by designed Samal Blak with a jagged line spanning the curtain), as friends James (baritone Ben McAteer) and Richard (tenor Nicholas Sharratt) find themselves lost during a hiking expedition (country unspecified). They gratefully take refuge in the large home of a mysterious and austere older man (baritone Steven Page), whose abode is revealed with a rather anti-climactic flourish as the curtain rises to reveal an almost bare room on the other side. This fairly unfurnished approach is maintained throughout most of the production, with the occasional bed, chair, and (in one massively symbolic instance) giant sheet with a Rorschach blot printed upon it being wheeled in and out by masked, ninja-like stagehands (their unidentifiable faces sparing them from Rorschachian analysis). Director Matthew Richardson and Blak also make fun use of projections and shadows, as well as with props, most notably the titular bottle itself, whose entrapped imp is rendered with an impressive foggy green light. All these elements combine to give the story an appropriate fairy tale-esque filter. Indeed in the first scene our eyes are drawn not to the bare stage, but to the spray of stars that litter the top half of the stage, as if an entire cosmos resided just below the roof of this man’s residence.

It’s a strange, ethereal beginning, whose mystery is only heightened as the main hook of the story is revealed: the old man is in possession of a bottle which, with the help of the magical imp trapped inside, offers its owner anything they desire, on condition that i) should the owner wish to sell the bottle on to someone else, they must charge a lower price than what they had originally paid, or else the bottle will still remain in their possession and ii) if they have not sold the bottle upon their death, then they are immediately damned to hell. The old man is understandably desperate to sell, and James, goaded by Richard, buys it for fifty dollars. We then shift (with the aid of a quirky airplane prop – more projections) to an unnamed metropolis where James and Richard are now, thanks to the bottle, living the high life. Having seemingly gotten everything he ever wanted, James sells Richard the bottle, this time for $49.99. James is still unfulfilled, however, until he meets Catherine (mezzo-soprano Rachel Kelly), but their marriage brings its own imminent tragedies, and James realizes he needs the bottle back immediately.

Themes of addiction and spiritual decay are out in full force (lines like “The bottle has destroyed us” explicate themselves), but Welsh does a nice job of owning the straightforwardness of Stevenson’s story in her adaptation. She has made some key changes to the plot which re-distributes some of the characters’ story lines and ends the story on a heavier note. It also gives her five characters enough dimensionality and inner life so that the final scene, now a tragic farce of desperate selling and re-buying as the price of the bottle falls ever lower and lower, a satisfying and fable-like sweep. The finance world setting, complete with business attire and sleek leather chairs, is a little obvious, but where else in the world is soul-sucking greed on such evident and tacitly accepted display? And it does produce some extra comedy with lines such as “Imp of the Bottle! Bottle Imp! Give me . . . a hundred dollars!”, sung with gravelly force by McAteer and so hilariously un-mystical in its contemporary immediacy.

MacRae’s score is jagged and atonal throughout, but richly and attentively thought through. I regret not paying a little more attention to the orchestra, who are perched in front of the stage and totally visible to everyone in the audience, and who perform the complex and percussive score with finesse. Their work (as conducted by Michael Rafferty) and MacRae’s music are the highlights of the production.

This shouldn’t diminish the efforts of the four performers however, all of whom are very strong. Doubling as the rich old man who sets the story in motion and a desperate vagrant who closes it off, Page is nicely oily at the beginning and scarily chaotic in the final scene. Sharratt’s Richard is convincingly wheedling in the first few scenes, but it’s in his descent into addiction in the second act where he really shines: outside of the singing, his scene spent reclining on a plush sofa while his hand nervously, continuously twitches is the most effective indication of the bottle’s effect and the opera’s themes. Kelly’s late appearance in the first half is a nice relief from some of the male-heavy antics, and, like Sharratt, she’s at her best in the second act, as her character takes a more central role and she struggles tragically with her innate compassion in the face of a situation that demands her condemning someone to eternal damnation. McAteer wears the lead role well, his earnestness effortlessly conveying his moral conflict. All four are, of course, excellent singers, with Kelly and McAteer being the standouts to my relatively inexperienced ears.

Richardson’s production is emphatic on ideas of mental instability, and the afore-mentioned Rorschach blot comes to dominate much of the second act. As a symbol it’s either unknown to an audience member, or it’s identifiable and therefore slightly repetitive as an indicator of the mysteries of the mind and how we perceive other people. At one point the blot is placed across two curtains which are drawn apart, and only brought together after James has confessed the secret of the bottle to a key character: is the idea that even after an explanation, a person can still remain a mystery, even to their loved ones? Or that the soul is unknown even to itself? These are all worthy questions, and relevant to the story, but they at times feel slightly proscriptive in their staging. But then, morality tales aren’t often told with ambiguity in mind.