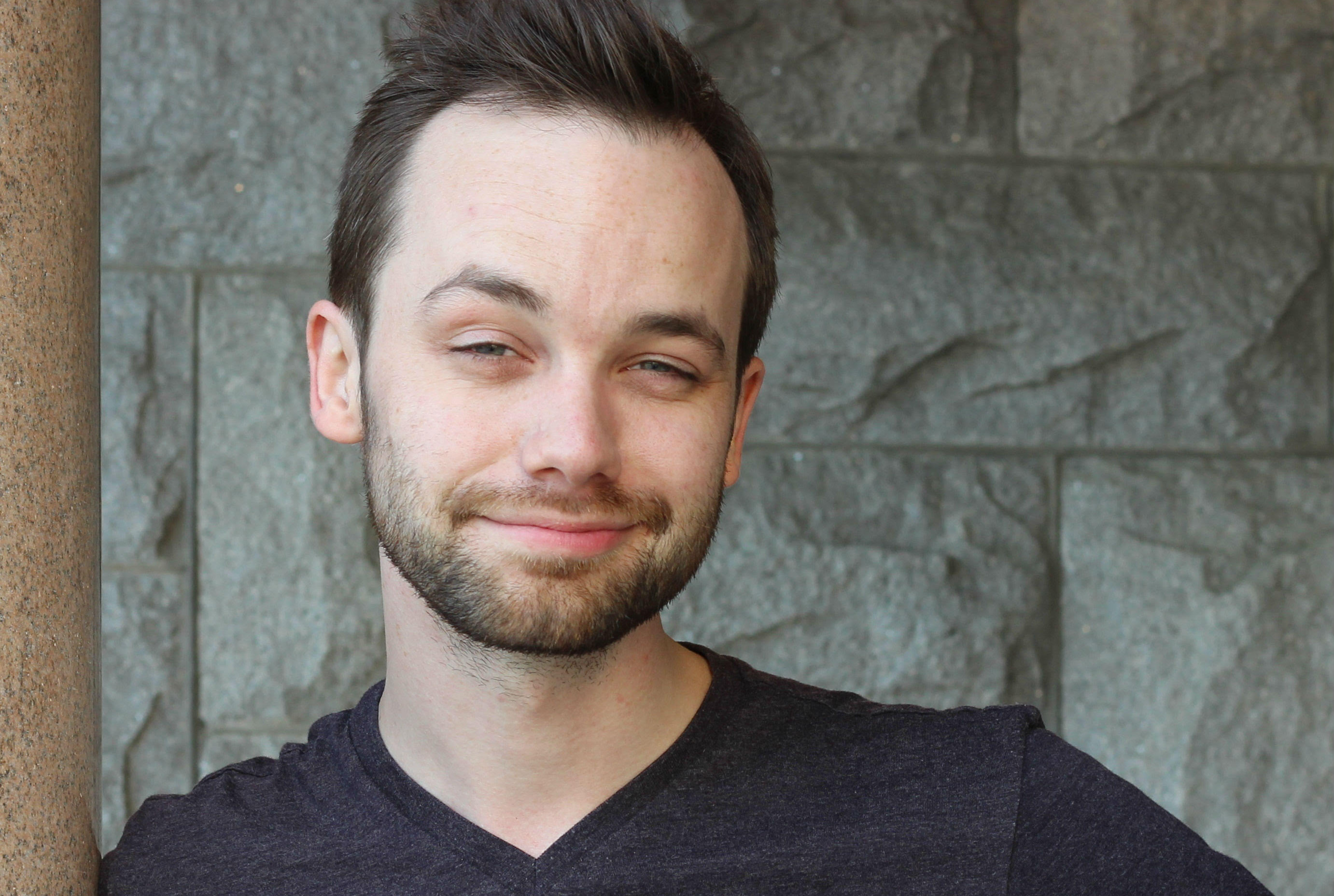 Chris Larson is nominated for Best Actor his role as Philo Farnsworth in Flat Earth Theatre’s production of The Farnsworth Invention. Farnsworth grows from a child prodigy raised on a farm in rural Idaho to the kinetic inventor of that modest phenomenon we know as television.

I chatted with Larson about the production, about balancing acting with sound design, and about the joys of being part of a thriving community of hardworking artists.

What drew you to work in the theater?
You know, I’d always been a left-brained person. I studied programming, logic, and math in college. I practiced law for a couple of years. I was a Cisco-Certified Network Engineer for a spell. But I had never experienced something so viscerally connecting as working on a play. In 2007/2008 my then girlfriend was working with several friends at the company The Independent Drama Society, and I remember going to see a show and thinking “Wow, that was really impressive!” I’d done a one-act in high school, and I think played the Modern Major General in The Pirates of Penzance when I was even younger, but I’d never felt what I felt seeing IDS’s shows. My ex was very encouraging about auditioning, and when I went for it I was lucky enough to be cast! I loved it! I felt like I’d been shown, in theater, this perfect, beautiful way of sharing what’s rich and raw and vital about the human experience.

The first time I saw you onstage was in The Independent Drama Society’s Romeo and Juliet, a show characterized by an excellent punk aesthetic. What elements draw you to audition for a particular kind of production?
There are three things that can draw me into a show: A new, unvoiced perspective; complex statements about the human condition; and friends who believe strongly in the piece.

That RJ was directed by Sarah Gazdowicz, who of course directed you recently in The Farnsworth Invention. It seems you go back several years with many other local theater artists. What do you enjoy about working in Boston’s tight-knit theater community? What hopes/goals do you have for the future of that community?
Sarah is one of my favorite collaborators, and I think she and I must have worked on a dozen shows together at this point, in various capacities. I love finding beautiful groups of people who pour their heart and soul into sharing meaningful stories with the world. I’ve been lucky enough to work with a few. IDS, Flat Earth, Bad Habit, Fresh Ink, Happy Medium, Whistler in the Dark, are (or were) all wonderful collectives with a specific vision they wanted to share. I learned so much about enthusiasm, grit, professionalism, love, whimsy, and fearlessness from the artists I’ve collaborated with. I’m incredibly grateful.

Since 2010, I’ve seen you both onstage in other fringe company shows, and in the program of several shows as sound designer/coordinator. How do you go about determining the sound design for a show?
Sound design is a complex thing. It’s often one of the least AND most present aspects of a production. With sound design you’re generally accenting moments, where as, say, an actor, you’re creating them whole cloth. I’d say my process for sound design is to find the tone of the play and the world it exists in, and then find ways to aurally bring people into that world.

For Reader, which I also did with Flat Earth, it was suffusing the entire play in unpleasant white noise, bass tones, and piercing ringing to unsettle the audience in subtle, but very specific ways. For Knock!, which I did with the Imaginary Beasts, it was filling the many short scene interludes with period Russian pop and classical music. It’s all about helping put people in a world.

Do you feel audiences consciously appreciate the artistic choices sound designers make? What about theater reviewers? Feel free to be as harsh as you like about the latter.
You know, that’s a really interesting question. Do I feel like audiences and critics consciously appreciate artistic choices sound designers make…well, let’s unpack that a little bit.

I would start by saying I don’t think it’s an audience member’s job to appreciate individual artistic choices made by anyone in a production. Audiences come to see theater in particular to have experiences, intensely human experiences, put on by other humans right in front of them, live. Audiences come to see and feel stories, to see others comment on and share the pain and joy and loneliness and exultation we all feel. I’m less concerned about people appreciating the choices than I am about getting people to feel what we’re trying to help them feel.

If they don’t see the thought and care that go into particular sound selections, then that’s good. If they don’t consciously process that a song that was coming out of a boom-box is now filling the theater because it’s filling the characters’ hearts and expanding their lives, that’s absolutely fine! So long as sound shows them towards that feeling and gives them the sensation of a world growing in possibilities at that moment, that’s all that matters.

Theater critics, on the other hand, I feel… honestly, a little ambivalent about. I know it’s tough to comment on so much in a show (e.g. performances, lights, set, costumes, sound), but I rarely hear about design work in general, and sound in particular, in anything but generic terms or highlighting a big moment. I wish critics were more aware of what sound designers do, and how much our work can bring things together for a play. Sound deeply affects human beings, and the epic highs and crushing lows of great productions would not hit nearly so hard without being emotionally guided to the right place.

How has your work in theater tech informed how you appreciate other shows you see? Do you plan to continue balancing acting with sound design?
Haha, well, the bad part is that bad design, of any kind, crushes a show for me, and that goes especially for sound. Thankfully, I don’t see that often here, but it can make a huge difference.

But it also means that when I see great design I get so damn excited and happy for someone else’s work. Pattern of Life, for instance, which is a Walt McGough play that New Rep put on, had AMAZING work by Edward Young. It made that world real, and his bringing me there put hairs up on my neck for 90 minutes.

I definitely hope to keep acting and designing in the future. They satisfy my right brain urges in different ways, and I love them both.

Your role as Farnsworth was energetic without being frenetic, no small task. What did you enjoy most about this production? Did it change the way you thought about this technology we often take for granted?
Thank you for the kind words! Can I just say everything?? Farnsworth was magical. I know actors often talk about shows like that, but everything really just came together for this one. It was an awesome team of people filled with friends old and new, and I can’t remember a green room as warm as this one. Sarah did a hell of a job, as did the ensemble, and the design team. I just tried to keep up with everyone else.

I fondly remember driving home with Fisher and Noah after rehearsals, joking and trying to build on what we’d done that day. And I remember Robin playing his ukulele just before one of our last shows, and all of a sudden lots of us singing “Somewhere over the Rainbow.” I nearly cried, because it was such a perfect moment. Working with this team was great, and I didn’t want it to end.

As for your second question, I think the show actually made me think more about what it means to be a driven, contributing person in this world. Sarnoff and Farnsworth were both visionaries that shaped our world today. Technology was a part of that, but technology, to me, was the means they chose to change society in very big ways. I think Farnsworth has made me more thoughtful about how I want to shape my world, which has been a very good thing.

What’s next for Chris Larson?
I am lucky enough to be sound designing for Stoneham Theatre’s Laura, which opens in May, acting in a piece this summer which I can’t talk too much about yet, and sound designing Mr. Burns at Opera House Arts up in Maine at the end of the summer.