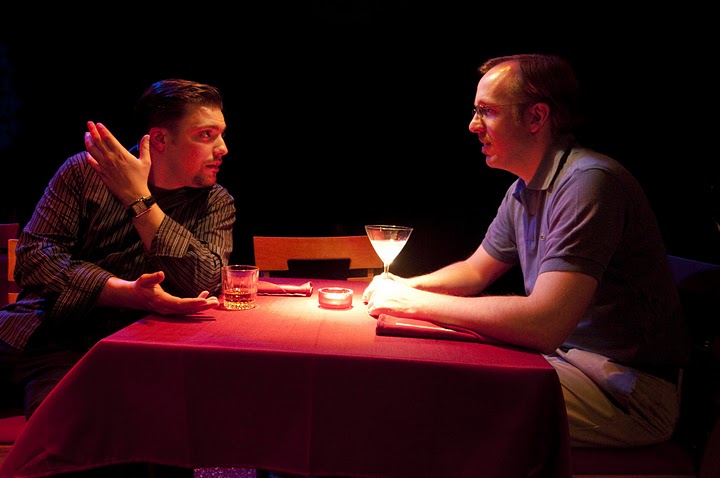 The demise of Boston’s Independent Drama Society was one of the saddest theatre-related tragedies of 2011. But before they left us, IDS presented 2 of the best independent productions of the year (both nominated for My Theatre Awards). The first (before Lindsay Eagle’s lovely Eurydice) was Glengarry Glen Ross, an engrossingly complex staging of Mamet’s most famous masterpiece from standout director Brett Marks. Nominated for 5 My Theatre Awards (including Best Actor, Best Supporting Actor, Best Ensemble, Best Director and Best Production- every category in which it was eligible), Glengarry Glen Ross was the most consistently well-executed production I saw all year. Its leading man, Michael Fisher, is one of our Best Actor nominees who took the time to answer a few questions about the production.

Can you remember your first experience with theatre?
Absolutely. I was playing the role of Peter Bunny in a first-grade production of The Magic Egg. Of course, anyone I told about the show transmuted “Peter Bunny” into “Peter Rabbit” and assumed I was the star. So I got a lot of undeserved credit that promptly evaporated when I dropped the crucial line “Help mama! Help papa!” on opening day. It was eleven years before I recovered.

Do you have any dream roles you think are perfectly suited to you or something completely against type you’d love to try as a big challenge one day?
It’s funny how the concept of “type” shifts over time, as one grows in age and -hopefully- ability. When I started acting, I was often cast as the fresh-faced romantic lead; gradually that trend gave way to a string of antagonistic roles as I lost my youthful idealism, I guess, and that was a relief because it’s much more fun to play the “bad guy.” It’s become something of a cliche to say that, but it’s true.

That said, there’s something even more compelling about playing the part of someone who has absolutely no control over anything. Someone who everyone else just walks all over, who is manipulated and abused when he’s not being ignored. It’s been a while since I played a part like that, and I’d love to experiment with that again.

What’s your favourite role you’ve ever played or production you’ve ever been in?
The first and last productions of my college career. The Laramie Project will always hold a special place in my heart as the production that first exposed me to the power of theatre. My experience working on that show is the reason I chose to study acting. Rashomon gave me an opportunity to put on a lot of latex and experiment with broad choices in physicality and vocal range, and some of my friends didn’t recognize me until the show was almost over. I was pretty proud of that.

How did you land the role of Roma?
I knew Brett Marks, the director, only vaguely, but I’d wanted to work with him for a while. When auditions for Glengarry Glen Ross were announced, I re-read the script and found I liked it a lot better than I did when I’d read it in college, so I auditioned.

Describe the rehearsal process for Glengarry Glen Ross.
Eight guys in a room, dropping F-bombs and talking about how no one wants to hang around with losers. Knocking chairs over. The testosterone was palpable.

Well, maybe not that florid, but it was definitely a different atmosphere than most rehearsal processes I’ve been a part of. A refreshing frankness permeated the atmosphere; there wasn’t a lot of B.S. getting in the way of the work, which was good because the work was difficult. It’s hard to inhabit the world of this play for an extended period, because it’s so incredibly cutthroat and vicious. Your blood pressure and heart rate are through the ceiling and the whole time you’re just feeding on this cocktail of adrenaline-fueled opportunism, greed, and disgust. And often, rage.

I’m really glad we had the cast we did, because I think we all enjoyed different aspects of the process … but more importantly, we all liked each other and that made it a really good time despite the difficult work.

Did you feel the shadow of Pacino at all from the movie version?
To this day, I still haven’t seen the movie. I own it -it’s on my shelf right next to me- but I’ve never watched it.

The stage setup ensured that you usually had your back to at least part of the audience. Was that tricky to navigate?
The theater in which I did most of my college acting was a 99-seat black box that was usually set up in a thrust configuration, so I was right at home. Brett did have to keep on us to “play the diagonals” a bit, but I think we were all pretty comfortable with how the set was arranged.

Roma can walk the line of pretty sleazy. How did you humanize him?
I’m not sure I ever did! Actually, I was concerned about this earlier on in the process; no one really wants to play a character that’s truly reviled. But (and not everyone will agree with this) ultimately it’s not my job to humanize him. I’m making choices based on what I think the character wants and what means he’s going to use to achieve them. If the audience finds something relatable in Roma as they’re watching him do that, that’s fine; if they want to sort of preemptively “forgive” him as being the product of his environment, they can do that; if they want to get off on hating him for two hours, that’s fine too. “Humanization” resides more in the purview of the director and playwright, in my opinion. As I say, not everyone will see it the same way.

That aside, the way I played Roma was informed by something interesting. There are several different “official” cuts of the Glengarry Glen Ross script. The one we used omits about a page of dialogue, right at the end. That missing page contains an exchange between Roma, Levene, and Williamson that fundamentally alters their relationship and makes Roma a much less sympathetic character. It essentially takes the Roma/Levene friendship -one of the only bright rays of optimism in the play- and slams the door on it. While you can still play it that way in the version we used, we thought it would be more interesting to retain that one bit of “goodness,” and played the Roma/Levene friendship a little straighter. That definitely helped humanize him.

Also, some of Roma’s lines are downright hilarious. It’s hard to hate a funny guy.

What’s different about working with a Mamet script?
Mamet is often praised for his dialogue, which retains a natural flow while kind of skipping along in this very stylized-but-lightweight sense. It gets to the point where the scenes sometimes play more like musical pieces than conversations. It’s tough to describe.

Of course, everyone always talks about the F-bombs, and, you know … there’s more to Mamet than that, but it’s still fun to be able to use all of this incendiary language and absolutely non-PC humor. Especially in a place like Boston, which you may be aware tends to be rather uptight about some things. I sometimes like rattling people’s sensibilities, so selfishly I was really enjoying the opportunity Mamet gave us all to spew invective in a way that made it tough for the audience to avoid chuckling uncomfortably.

Brett Marks and Jeremy Browne are also nominated for My Theatre awards for the show. How was working with them?
Ridiculously awesome. I think this production was an early one in Brett’s directorial career, and that’s something I didn’t know until after the process was over. I never would have suspected it. He’s the epitome of an actor’s director, in every sense that matters, and my biggest regret about working with him was that it didn’t happen years earlier. I think I said so on his LinkedIn profile too, so you know I mean it. It’s on the internet.

Jeremy Browne and I audition for the same parts pretty often, and when we see one another in the lobby or wherever, we always have that “aw, crap” moment that comes with knowing the other guy’s gonna get the part. We have a healthy respect for each other, is what I’m saying. The guy can play in wonderfully subtle shades, really driving for an objective while maintaining that vulnerability that’s so elusive to so many actors. I kind of hate the guy.

The connection between you and Phil Thompson’s Levene was particularly well developed. Was that something you focused on?
Speaking of vulnerability. Yes, the play demands that the Roma/Levene relationship be a big focus, and it was difficult at points because Phil’s portrayal of Levene made it so easy to sympathize with the poor bastard. Of course, Roma sympathizes differently than I do, so it took some work to figure out how to react honestly to those moments where it’s clear to everyone but Levene that he’s washed up for good. I’m not sure it’s possible to put into words what those moments were like between Phil and me, and between Levene and Roma. At the risk of sounding even more pretentious, I think that’s one of the great parts about theatre: you have to be there.

Do you have a favourite moment in the production?
The long stretch of silence after Lingk leaves for the last time, right before I rip into Williamson. He knows what’s coming, and so does the audience. The air in that gap was always electric.

What are you doing now/ what’s your next project?
This spring, I’ll be appearing as Pete in a production of Rachel Axler’s Smudge, opening in March at Apollinaire Theatre Company. Following that, in June, I’ll be playing Michael in Silvia Graziano’s Indiscreet Discretions at Fort Point Theatre Channel.

They’re very different characters in very different scripts, but they’re both going to be a blast to tackle. Each is also disturbing in its own way. Come on out and get a little rattled!