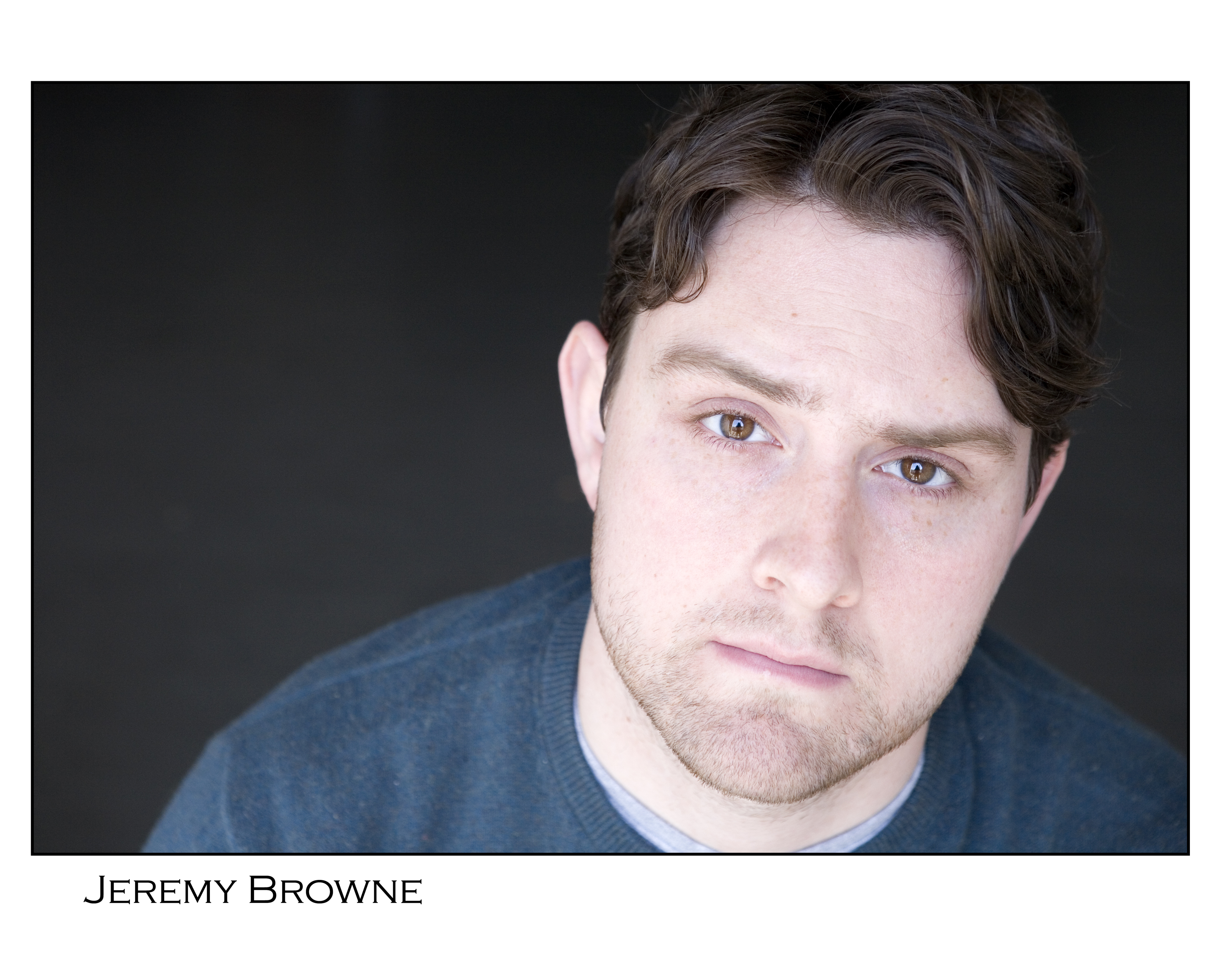 The demise of Boston’s Independent Drama Society was one of the saddest theatre-related tragedies of 2011. But before they left us, IDS presented 2 of the best independent productions of the year (both nominated for My Theatre Awards). The first (before Lindsay Eagle’s lovely Eurydice) was Glengarry Glen Ross, an engrossingly complex staging of Mamet’s most famous masterpiece from standout director Brett Marks. My favourite actor in the production was Jeremy Browne, a Best Supporting Actor nominee for the tricky role of office persona-non-grata John Williamson

Can you remember your first experience with theatre?
I can’t remember my very first experience, but I know I’ve always been big on telling stories.  My first professional experience was playing a dwarf for the Wheelock Family Theater’s production of  The Hobbit.  I was ten or eleven years old, understudying for Thorin Oakenshield– who was played by a girl– and when I had to go on for her all I remember was that her costume was too small for me!

What actors and actresses have always inspired you?
I’ve always joked that I was named after Jeremy Irons– who is, of course, phenomenal– but I’m not sure how true that is.  I guess my taste in actors changes depending on what I’m hoping to do or where I am in my career.  Most recently, Tom Hardy and Christian Bale have been my biggest inspirations simply because of how far they are willing to go for a role.  I was actually on set with them recently and I have to say that they are every bit as impressive in person as you would expect.

Do you have any dream roles you think are perfectly suited to you or something completely against type you’d love to try as a big challenge one day?
I think that any classically trained actor would answer this question in the same way– Romeo, Hamlet, Macbeth and Lear, respectively.  Romeo is the only part that I’m worried I won’t get a chance to play because he’s usually viewed as young and slight, when in fact there’s little to no text referring to his age or physical stature!  Nevertheless, there’s a window that’s closing for me and I hope I can find an opportunity to tackle that role before I’m too old.  In terms of an ‘against type’ role, I’m often cast as the good soldier, but I’m always attracted to the villains.  I look forward to playing Iago someday, as well as Edmund the Bastard.

What’s your favourite role you’ve ever played or production you’ve ever been in?
Just after I graduated from UMass I was cast as Katurian in a production of  The Pillowman.  I love McDonagh’s style and The Pillowman is a behemoth of a show.  Not only does Katurian speak for about 70% of the show, but he almost never leaves the stage.  There are also some very difficult technical aspects to the role and it’s one that could easily be seen as against my type– basically, it was a huge challenge but one that I loved every second of.

Describe the rehearsal process for Glengarry Glen Ross.
Glengarry can be a very elegant show, but at its core it’s really just a cesspool of testosterone.  You can imagine what the rehearsal room was like– a bunch of guys trying to be friendly one moment, and then biting each other’s heads off the next.  Ultimately, it fell to Brett to reign us in when he needed to and to let out our leashes a little when he wanted to see blood.  None of us would have made it out of there if it weren’t for him.

How did you approach the role? Did you do anything specific to prepare? Are there any key components that a great Williamson should have?
This may sound silly, but it’s proof that it’s the little things that matter most: I hate shaving.  I wear a beard for most of the year, and when I can get away with stubble in a show, I pounce on the opportunity.  But for Williamson, who is such a straight laced guy, I had to break out the razor.  Of course, plenty of character work had been done before this, but I didn’t really feel like I was wearing the part until I shaved for the first time.

The first time we meet Williamson, he says about 4 lines in the entire first scene. Was it tough to keep focus? Were you in the character’s head through all that or would you detach a bit?
That first scene is a tough one.  Tough, but important.  Mamet doesn’t waste a single second of stage time, so even though I was sitting across from Shelley and barely moving, we were building tension between the two characters from the moment the lights came up.  There isn’t an opportunity to let your mind wander– every time Shelley cut me off, I had to be ready to say whatever it was he didn’t let me say.  Every twitch of an eyebrow and every shift in the chair was choreographed to maximize the amount of tension produced in the first ten minutes on stage.

The stage setup ensured that you usually had your back to at least part of the audience. Was that tricky to navigate?
It’s always hard to have your back to the audience because you don’t want them to miss anything, but the truth is– in my opinion– it’s not about what I’m doing, it’s about what I’m doing to the other actors.  Even though I’d want my mother to see my face the whole time, it’s more important that she see the face of my scene partner, because that’s where my real work shows.

Williamson is seen as a bit of an antagonist to the other characters. How did you humanize him?
I think in a show like this, every character is antagonizing everybody else!  Williamson is simply a hard working guy who spends 90% of the show taking crap from everybody he talks to.  I guess I “humanized” him in the last moment when he discovers who robbed the office– it’s probably the only time you see him with his guard down.

What’s different about working with a Mamet script?
As I mentioned, I’m a bit of a Shakespeare buff, and there are some strong parallels between the two playwrights.  To begin with, the script is the thing.  Always.  There’s room for interpretation, but you don’t need to make these huge left-field choices to get the audience’s attention– to the contrary, it’s often the subtlest and simplest choices that are the most effective as long as they’re drawn from the text.  And both use the script almost as a musical score– the rhythm is there, written out for you.  Pause when they ask you to, don’t when there’s no indication, and really hit the key words (with Mamet, these are usually expletives!) and you’ll be surprised by how easily and naturally the dialogue is delivered.

What were some of the biggest challenges working on this production?
I guess the most challenging part of this production was finding a way to make it new and to keep it fresh.  A lot of people have seen the film– which Mamet directed and which is quite good, but it’s a different experience entirely.  On top of that, I’d seen it produced at the GAMM in providence, and on Broadway, and it’s hard to make a new choice when you’ve already seen an amazing actor nail each moment.  All you can do, though, is remain present and make the choice that’s right in the moment.

Brett Marks and Michael Fisher are also nominated for My Theatre awards for the show. How was working with them?
Working with Brett and Michael was a dream.  They both invest themselves completely, and this show wouldn’t have been possible without either of them.  I’m just glad we made it out of the process as friends, and I hope to work with them both again soon!

Do you have a favourite moment in the production?
My favorite moment to play was the discovery toward the very end.  Shelley said something he shouldn’t have and in the pause that followed you could literally hear people holding their breath.  It’s fun to know that a room full of people are watching with you, discovering something at the same time that your character is discovering it– it’s a thrill ride.

What are you doing now/ what’s your next project?
I’m about to open a show called Photograph 51 at the Central Square Theater in Cambridge.  After we close, I’ll be reprising a role in an international tour of Julius Caesar— we toured in France last spring, and will be playing a festival in Bogota, Colombia this April.  Then it’s back to Boston and back to auditioning, though I’m hoping to find a weekend to get away with my girlfriend, Scarlett, who is also an Actor.  We’ve both been working since the holidays and she’s booked until mid June.

Do you have anything you’d like to add?
Thanks for the thoughtful questions!