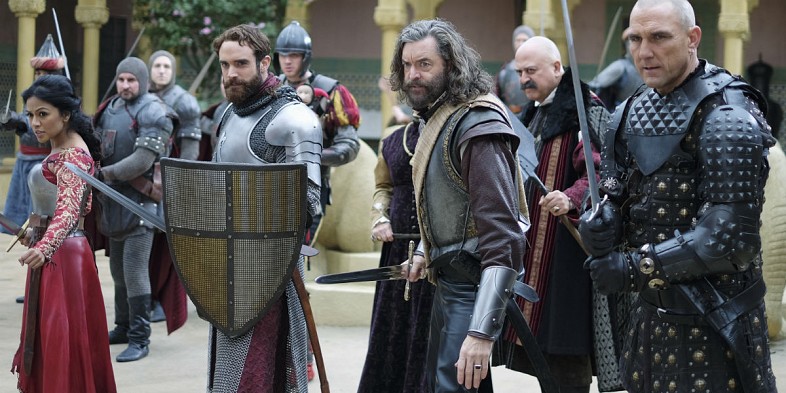 The second season of this wacky medieval musical came as a surprise to everyone, most of all the show’s creators who proceeded to pepper those unexpected 10 episodes with references to the fact that they assumed they were dead before being quite randomly revived (at one point they literally killed their title character and brought him back to life because metaphors don’t always need to be subtle). Hope, just a little hope, still exists for another out-of-the-blue renewal but, for now at least, Galavant’s adventure has wrapped up (mostly) happily ever after.

Abandoning, temporarily, the catchy theme song that recurred through season one, Galavant began season two with a “new season” ditty sung by  Hugh Bonneville as an inexplicable pirate and the first in a series of strange guest stars that included Kylie Minogue and Nick Frost. Most of these folks were encountered by our handsome bearded hero and his show-stealing former nemesis/current best friend King Richard (Timothy Omundson, upping his MyTV Award-nominated performance to legendary levels as the ne’er-do-well virgin former-king). Their quest was similar to that of season one Galavant, on his way to rescue his “one true love”. Of course, said “one true love” was a different person this time, but the deal was still more or less the same. Instead of secretly evil Madalena, our post-modern damsel-du-jour was last season’s snippy sidekick Isabella (Karen David) who spent most of this season locked in an oversized jewelry box, betrothed to her eleven-year-old cousin and having her mind controlled by an evil wedding planner (obviously).

Madalena, meanwhile, dabbled a little in humanizing subplots about her sad past before sharing a season-topping duet with Isabella and finally dipping into the dark arts in a very “just in case we get a third season” twist. More importantly, she slowly and beautifully fell in love with her newfound right-hand-man Gareth (Vinnie Jones). It was a lovely pairing that easily beat any of Galavant’s romances and only came in second to the one between Richard and his childhood pal Roberta because Richard is so damn delightful and his happiness is of the utmost importance to me. Galavant is often a bit too superficial-silly for my taste but the moment Madalena went down the line thanking the characters for their contribution to her season and said to Gareth “thanks for the love”, my heart simply burst.

Erstwhile Lee Jordan (Luke Youngblood) was all but completely wasted this season and Chef Vincenzo (Darren Evans) and Gwynne ( Sophie McShera) were written out pretty quickly but the wonderful and generally under-used Ben Presley got the standout song of the finale and all the important elements came together in the end to make the show’s surprise second season as acceptable an ending point as we’re likely to get. A flashback to Richard’s childhood (with Menken shoutout!), Roberta being saved from “spinster island”, Gareth rushing off to “save Madalena from herself” and reappearance from every non-major-guest-star character of the season made for a fairly happy, and hopefully temporary, ending for Galavant.