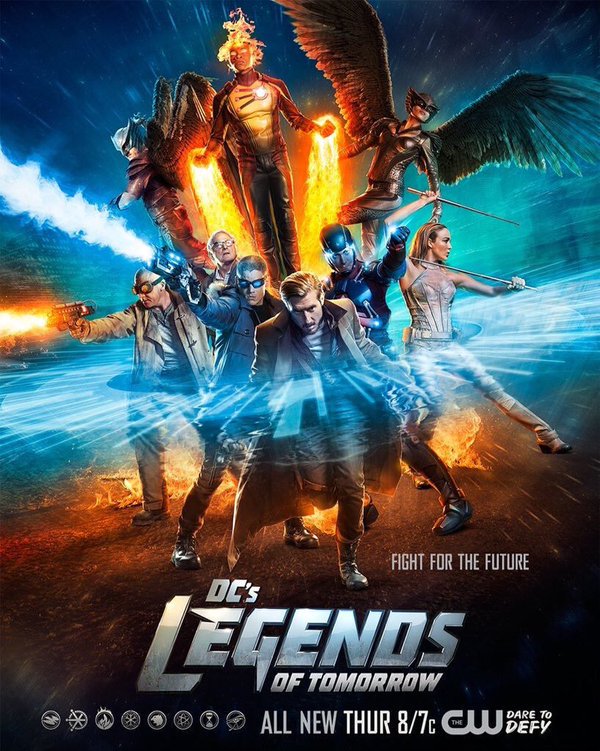 Not Quite the Stuff of Legends

Legends of Tomorrow has its work cut out for it. Not only does it have to distinguish itself from every other superhero TV show or movie, it specifically has to distinguish itself from its sibling series. Legends of Tomorrow is the third show in Greg Berlanti’s CW superhero universe, its predecessors being Arrow and The Flash. Unfortunately, Legends doesn’t live up to its title or the standards of the other shows in its universe.

(Spoilers ahead, but it’s been a week since the second part of the series premiere aired, so you’ve had time).

The premise of the show is a Time Master from the future, Rip Hunter assembles a ragtag team of people with special abilities from the year 2016, to stop the evil and immortal Vandal Savage from taking over the world in 2166. The team is made up of characters introduced in either Arrow or The Flash. Even Savage was introduced in a Flash/Arrow crossover. He didn’t make much of an impression in the crossover episode, so the show will have to try harder if it wants to make him the big bad of the season. Savage’s fate is tied to the fate of Kendra Saunders and Carter Hall, aka Hawkgirl and Hawkman. Kendra and Carter were lovers back in ancient Egypt, until Savage killed them in a jealous rage. Kendra and Carter keep reincarnating, Savage keeps killing them to sustain his life force.

The problem with these three at the center of the story is Kendra and Carter are terrible protagonists. Kendra was fine when she was on a normal barista on The Flash. Then Carter showed up and jogged her reincarnation memories. Despite not liking Carter much (because he is the worst), Kendra agreed to go with him to learn more about her past. Poor Kendra: what a terrible fate to be reincarnated and have to spend her short lives with a smug partner, only to be murdered over and over by an obsessive creep.

Carter keeps calling Kendra “Chay-Ara”, her name from her first life and telling her things like they’re destined to be together forever, or the woman he loves wouldn’t do this, or this is how they always do things. Kendra rightfully tells him off, saying the more he says they’re destined to be together, the more she wants to prove him wrong, which, after several episodes of this nonsense (both in The Flash and Legends of Tomorrow) was long overdue. It was so uncomfortable to watch Carter act like he was entitled to Kendra, while condescendingly trying to mold her into the woman he remembered, especially when she made it clear she wasn’t interested. But then, Savage murdered Carter, and Kendra was inconsolable, saying she never got to tell Carter she loved him. Since when? And also, more importantly why????

I want to like Kendra/Hawkgirl, mostly because my friends who follow the DC universe more closely than I do love that character. And I enjoyed Kendra on The Flash before they introduced the Hawkgirl storyline. But this version of Hawkgirl is too all over the place (even for someone going through an identity crisis) to be anything other than annoying. Her emotions and motives make sense in individual scenes. But then a few minutes later, she’ll do a complete 180 out of nowhere, making her a maddeningly inconsistent character. She does and feels whatever is convenient for the writers in a particular situation, making her more of a device than character.

I’m sure we’ll run into another incarnation of Carter, since that’s his thing, but I almost wish Kendra had also been murdered, so we can start with a clean slate. Everything about her, Carter, and their relationship is so uncomfortable. Worse, their love story has been built up to be a very central part of the plot, and it’s not believable on any level. Kendra needs to be given some consistency, and quickly, or else, I might start rooting for Savage. (If we do meet another incarnation of Carter, hopefully he’ll be a little less smug).

Speaking of how central Kendra is to the storyline, Rip’s explanation that he chose people who were “nobodies” and therefore had little effect on his 2166 timeline doesn’t make sense. They have established Kendra is literally the only person who can kill Savage. It’s possible Rip didn’t realize Kendra’s importance, but that seems like too big of a coincidence to swallow. Small gaps in logic like that start to add up, and take away from the show overall.

To its credit, Legends of Tomorrow has its moments. The characters (other than Kendra and Carter) range from inoffensive to delightful. The inoffensive, if somewhat bland, are Ray Palmer, Jefferson Jackson, and Sara Lance. Palmer and Jackson were overshadowed by the other characters. Palmer is an idealistic boy-scout in a group of misfits, so he was easily eclipsed by his teammates. Jackson likewise was overshadowed by his domineering partner, Professor Stein. I’m optimistic though, that as the show progresses, they’ll get storylines that better play to their strengths.

If Palmer and Jackson didn’t get enough of a chance to establish themselves, Sara Lance had almost the opposite problem. The show worked really hard to establish her as a Badass. Her introduction was her, drinking alone in a bar somewhere in Tibet. (As you do.) She stops a gross guy from sexually harassing a girl by beating up a bunch of guys who are much bigger than her. The whole “tiny blond girl kicks ass of everyone in the bar” felt a little forced and a little cliché. I was going to overlook it, because with its remote setting, it felt reminiscent of Marion Ravenwood’s introduction in Raiders of the Lost Ark: foreign girl holds her own in a bar. I don’t know if that was an intentional homage, or if that was my brain telling me I’m due for an Indiana Jones rewatch soon, but reminding me of Indiana Jones will buy you a lot of good will.

Until it happened again. Lance snuck out with Snart and Mick Rory (more on them in a bit) to a bar. She was instantly hit on by an aggressive creep, so she started a brawl. There wasn’t really a narrative purpose to this scene. It was mostly to remind us that a) no matter if Sara goes to the Tibetan mountains or back to 1975, there will be some creepy guy ruining everything and b) Sara is a Badass.

Having two scenes in one episode that were mostly there to show us Sara beating up a large group of people felt like overkill. I like a well-choreographed fight scene as much as the next person, but I enjoy them infinitely more if they have a narrative purpose and if I care about the character who’s fighting. They could have probably cut or condensed at least one of those scenes. But I have hope for Sara, because she did have a great scene with her sister, Laurel. Sara talked about her concerns with joining Rip’s mission as she trained with her sister. It showed Sara had some fighting skills, it gave her a chance to discuss her fears, and it showed a softer side to her than she shows her teammates. By the time the second episode rolled around, Sara’s fight scenes didn’t feel forced in there just so she could prove her assassin skills, and she had a few moments where she was able to loosen up. As long as there’s more of that, and less gratuitous “kicking all the ass” scenes, then Sara will be in good shape.

While some of the team finds their footing, Leonard Snart, Mick Rory, Professor Stein and Rip Hunter are holding the show together. Snart (Wentworth Miller) and Mick Rory (Dominic Purcell) were fun adversaries on The Flash, and they don’t disappoint here. In a team of would-be do-gooders, Snart and Mick Rory’s unapologetic self-interest is refreshing. Not to mention, they add some needed comedic relief, with Mick Rory’s bluntness, and Snart’s snide comments. They pair off well against the intellectual Professor Stein and aloof Rip Hunter. It helps, of course that Stein is played by the brilliant Victor Garber. One of my favorite moments in the pilot was when Jackson asked Stein if he had ever played football. The look of utter disdain on Garber’s face was worth sitting through the less solid parts of the episodes. The always dependable Arthur Darvill rounds out the cast as Rip Hunter, who goes between cool, mysterious time traveler, and exasperated leader who regrets ever assembling his team.

Like its protagonists, the show isn’t the stuff of legends. It has the potential to change that, and it’s enjoyable enough for now to stick around and see if it manages to smooth out its bumps.

I try not to nitpick time-travel too much, because it’s guaranteed to give me a headache 9/10 times. But the pilot episodes mostly take place in the 1970s, so the team can stop Savage before he gets too powerful. Rip Hunter warns against interfering with their personal timelines too much. That makes sense. But, since Kendra and Carter literally just fought Savage in 2015, taking them from 2016 so they can kill Savage in 1975 seems to be a pretty big alteration to their timeline. I mean, they are trying to alter Rip’s 2166 timeline, in which Savage takes over the world. But why alter the timeline more than necessary? Why not go a few years after 2015 to try and kill Savage then and minimize timeline alterations? Professor Stein almost missed meeting his wife back in 1975 because of their presence in the past. What other consequences will there be, and will those be addressed?