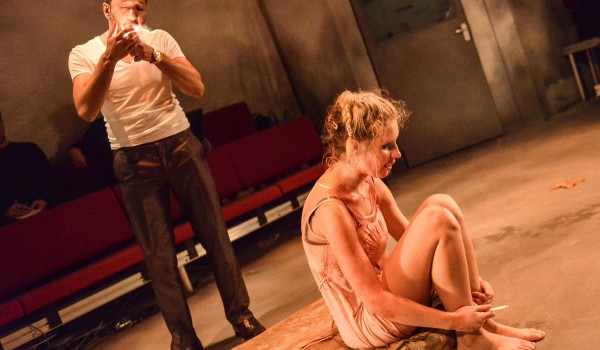 I liken this play to violent videos available on the internet: they are tempting to watch, may be objects of temporary immersion, yet they are ultimately unedifying. They instill little in us other than a general contempt, for their structure and perspective are highly objective and therefore contrast rather soullessly to the personal and spiritual damage that they depict. Firebird (by writer Phil Davies) maintains this same phenomenon. Set in modern Rochdale, it portrays wayward 14-year-old Tia (Callie Cooke) and her abuse by the grooming AJ (Phadlut Sharma), whom she meets in a kebab shop.

Even if the particular circumstances of this real-life-inspired plot appear uncommon, this is a straightforward recounting of abuse, and that is a shame because it has so much opportunity for commentary. Davies clearly wants to say something: that we fail to provide girls like Tia the chance of familial compassion and this is one clear cause for entering malignant relationships, yet there is far too much attention given to the harrowing crimes themselves and not enough to their etiology. The most we understand is Tia’s plea to her friend to invite her to family dinner, something that the orphaned protagonist has never experienced. While Davies may be accurate in the details of the grooming and its police investigation, there is nothing here to truly surprise. While it is shocking to view the abuse (or at least its interstices), it mostly sedates it owns conflict. The only thing stopping the rest of the play from becoming matter-of-fact is Cooke’s stochastic yet agonising portrayal of Tia’s outcome. Her brattish personality in the initial scenes transforms into a broken imago seemingly incapable of self-redemption. Cooke nails this, particularly the cognitive dissonance of helping herself and helping AJ, two mutually exclusive objectives; her consequent grief appears therefore genuine, particularly in the more subtle conflict between herself and an unamiable detective. Nevertheless, Cooke is incapable of reaching similitude when delivering some of Davies’ more unrealistic pandering dialogue (‘He was really old. Like 40’).

The effect of Firebird is interesting: it shows us that drama-rich scenarios do not automatically beget drama-rich theatre. More consideration of narrative and character is needed.