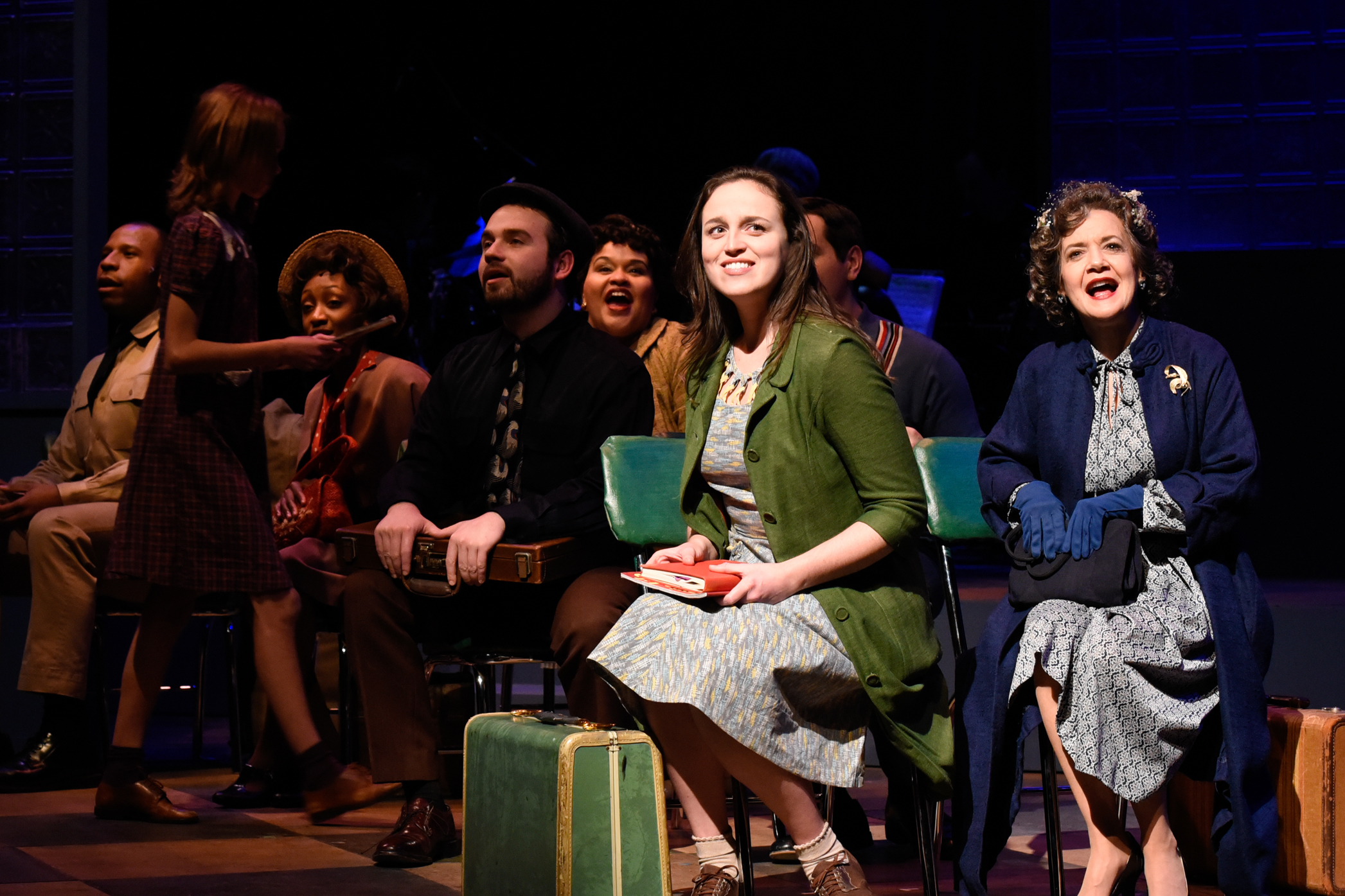 SpeakEasy Treks Across America in Violet

A revived musical has just pulled into town. SpeakEasy Stage Company has brought back the musical Violet, directed by Paul Daigneault, musical direction by Matthew Stern, to the Stanford Calderwood Pavilion. Jeanine Tesori (music) and Brian Crawley (book and lyrics) first joined forces to adapt Doris Betts’ short story “The Ugliest Pilgrim” into a musical back in 1997. Sixteen years after SpeakEasy first produced it, following a recent Broadway production, the show is back for a fresh run.

Violet (Alison McCartan) is a young woman on a mission. Several years after suffering a childhood accident that left her face disfigured, Violet has been given new hope for healing: a televangelist (John F. King) who makes the lame walk and the blind see in the holy mecca of Tulsa, Oklahoma. Violet hops on a Greyhound bus in Spruce Pine, North Carolina, for her thousand-mile trip West towards miraculous beauty.

Our heroine’s newfound hope to stop being “ugly” is laced with daydreams of dazzling features. She doesn’t want to just get rid of a huge scar: she wants cheekbones like Ingrid Bergman, and hair like Elke Sommer. She wants more than she’s been given, maybe more than she has ever dared to think she deserves. So she has saved her pennies, combed through her Bible, and is ready to make her case before Jesus’s spokesman.

This isn’t just Violet’s story. On the way, we meet two soldiers, Monty (Nile Scott Hawver) and Flick (Dan Belnavis), who bond quickly with this sharp-tongued mountain girl. Although this threesome drives the story, the plot digresses deliciously as we run into fellow passengers: a well-meaning, prim old lady (a hilarious Kathy St. George) on her way to Nashville, “country-music capital of the world”; two respectable, anonymous ladies with lovely hats, who knit and sway gently on their long bus rides (Tyla Collier and Carolyn Saxon), who double as music hall chanteuses and gospel choir soloists. Stephen Markarian and Patrick Greeley get extra points for morphing seamlessly from bus drivers to passengers, from enthusiastic club dancers to born-again Christians. And King completely rocks as the charismatic TV-preacher.

The narrative shifts from the present back to Violet’s childhood, where we see young Violet (Audree Hedequist) laughing and fighting and bonding and playing cards with her loving father (Michael Mendiola). Hedequist and Mendiola are fabulous in “Luck of the Draw,” arguably the most creative song in the show.

While “Luck of the Draw” and “On My Way” (belted by McCartan to great effect) were moving pieces that stuck with me throughout the show (an hour and forty minutes, no intermission), I was sorry and surprised to find most of the musical’s score forgettable. The first time I ever heard of Tesori was in Theater of War, a documentary that covered the production process of The Public Theater’s 2006 show Mother Courage and Her Children, starring Meryl Streep and Kevin Kline. Tesori makes a brief appearance, and mere snippets of the tunes she created for that show have stuck with me for years. It’s a shame that I couldn’t hum a bar from Violet just a few hours after leaving the theater.

But the score did not trouble me as much as the musical’s major plot revision did. The end of “The Ugliest Pilgrim” is appealingly open-ended. Violet may have had her hopes for divine cosmetic intervention crushed, but there is still hope to be found in the friendships she has forged on her journey, in the connections she has made with two men who are more than willing to look her straight in the face, scar or no scar. And whether a permanent romantic relationship will follow is debatable.

But (spoiler alert) ending the musical with overt romance, passionate kiss and the saccharine line “You belong with me” included, problematically implies that this independent, vibrant young woman just needed to find a male lover to confirm that her scar was no impediment to her eventual happiness. There is tenderness in the fact that Violet has met someone who sees beyond the image. But this tenderness does not cover up for the fact that the musical ends too much like a Taylor Swift music video.

I also couldn’t help but be somewhat troubled by the implication of this future romance (more spoilers) with Flick, who is black. Flick has felt the full force of mid-20th century segregation, and he repeats constantly to Violet, who is obsessed with curing her “ugliness,” that she “doesn’t know what she needs.” He’s right that she doesn’t have to “fix” anything, and he strives to convince her that someone like he can love her as she should be loved. It makes emotional sense that the two have bonded over similar experiences of marginalization, of being seen as less-than for not belonging to a dominant majority. But to equate a physical disfigurement with being black in 1964 America risks reducing the particulars of both experiences.

The alienation Flick has experienced is not equal to that which Violet has experienced, though the musical’s language implies as much. As he proposes his love, Flick demands that Violet look at him, as she has angrily, if silently, demanded that others do to her. “I have been waiting, for a lifetime / For someone simply / To look and see me.” But Violet has been burned by people’s unwillingness to accept her appearance, by their averted gazes, by the misplaced pity that scalds her like oil. The problem most African Americans of this period experienced was not pity or merely being given a wide berth. The connection may seem emotionally comforting, but conflating Flick and Violet’s sense of invisibility is disquieting and feels unearned.

Still, it was refreshing to see a musical quest based on the experiences of a woman, a no-nonsense Southern gal who is determined to change her fate on her own terms. If the spirit moves you, you should join her on this unique bus ride.