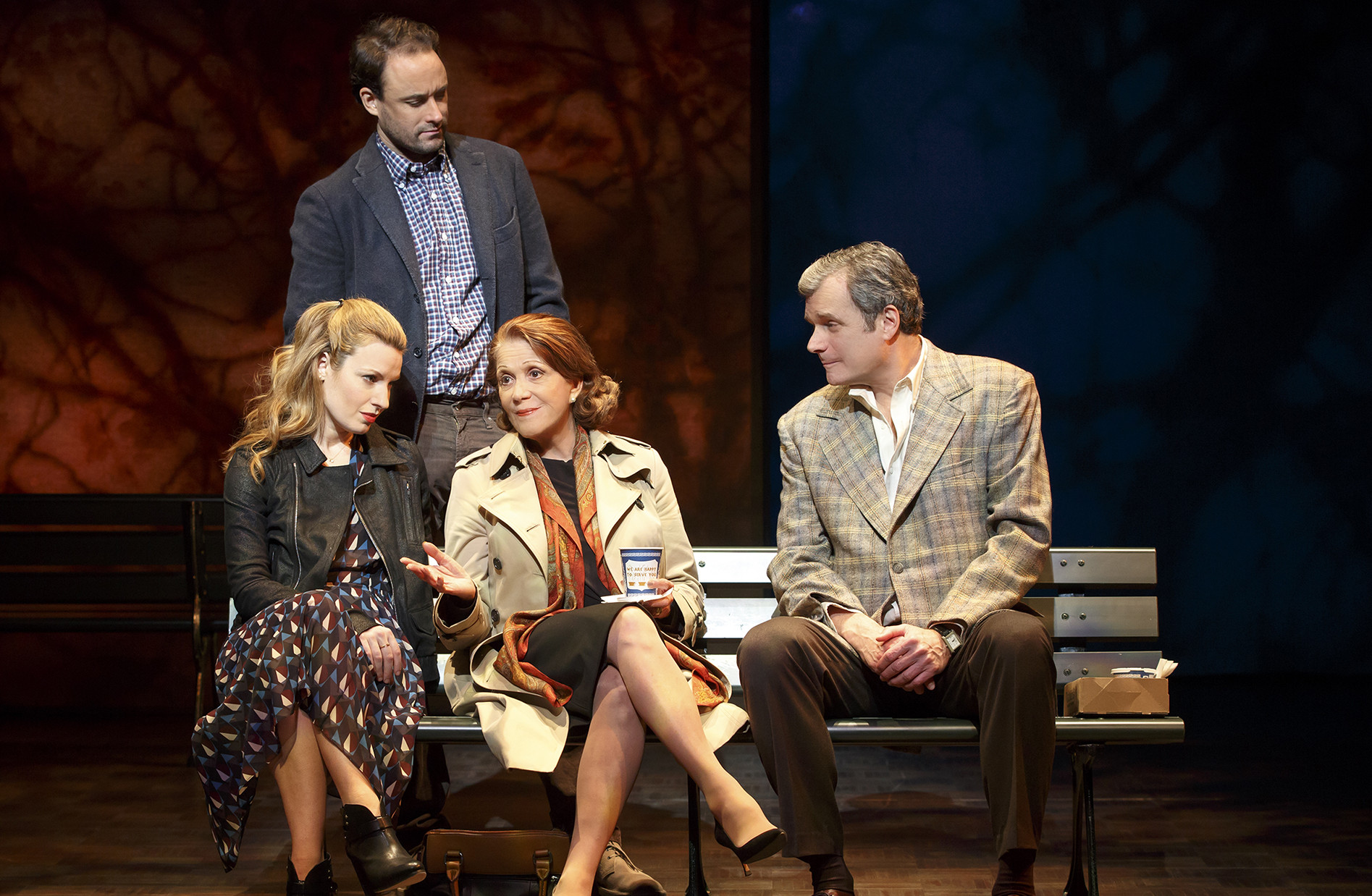 When someone comes into my office and shuts the door behind him or speaks in a hushed tone, there are only a few topics that are about to be discussed: pregnancy, death, marriage, or someone is quitting or getting fired. When seeing a play about a family drama, it’s hard not to immediately round up the usual suspects of family secrets: affairs, homosexuality, child favoritism, or shocking lineage. Unhappy families may be unhappy in their own way, but in a two-hour play, there are only so many things that even the most dysfunctional families can do wrong. Fortunately, Richard Greenberg’s new four-person play, Our Mother’s Brief Affair gets the big reveal out of the way in the title. While the play indeed is full of tension and secrets, Greenberg avoids forcing the audience into a guessing game of what events in the past weigh heavy on this family. Instead, dysfunction, neurosis and resentment are laid out in full view. Ultimately, Greenberg provides an entertaining drama bolstered by witty and sharp dialogue brought to life by the especially superb acting of Linda Lavin.

The story begins when widowed Anna (Linda Lavin), who is perennially on the verge of death, makes a shocking* confession of a past affair to her adult children – Seth (Greg Keller) and Abby (Kate Arrington). Although Anna’s memory is fading, she still maintains graceful fortitude and a whole lot of moxie.

The play is split between a hospital room in 2003 and flashbacks to 1973. The set is minimalist, with not much more than the 1973 Central Park bench where Anna first encounters and falls for her lover (John Procaccino), and a chair residing in modern times. As Anna recounts her affair to her children Seth and Abby, they are able to straddle the present and past, often breaking the fourth wall with asides to the audience. While there is nothing inherently wrong with these asides, its overuse is the show’s biggest weakness. Plot points often feel spoon-fed to the audience rather than integrated into the play’s dialogue. In the same vein, the characters’ multiple roles as narrators and actors sometimes break the flow of the story and add some confusion.

However, the play flows seamlessly during Anna’s flashbacks. These flashbacks to the park bench are poignant and full of humor because she interacts with both her past lover and her present day children. As she is speaking aloud to her lover, she is able to share her internal thoughts with her children. The audience receives the benefits of hearing that internal dialogue, but also her defensive responses when her children question her choices.

Seth also steps into and out of 1973, trying to make meaning of the affair as he uncomfortably watches his mother flirt with a man who is not his father. In an aside to the audience, Seth is befuddled when he considers the ramifications of his mother’s choices as he delves into her sex life (“you try talking this way about your mom”). The structure is reminiscent of the way the Tony award-winning musical Fun Home allowed a daughter to narrate her father’s life, through the eyes of a child but the voice of an adult.

Because of Anna’s fading memory, the veracity of the story also falls under scrutiny. At moments, Anna is speaking to her children about an encounter that occurred 30 years prior, recounting things her lover told her. It’s a temporal and metaphysical game of telephone. The lover tells Anna something, which gets retold to Anna’s children decades later, and the children try to parse fact from fiction. No doubt some things get lost in translation along the way, yet the sentiments are genuine. It is much worse than simply having an unreliable narrator because the adult children as well as the audience are never entirely sure what is truth, what is self-serving fiction, whether Anna’s memory properly reflects the truth, or whether she is simply in denial.

While Greenberg’s script is well-written, he was lucky to have an actress like Ms. Lavin who can make the most of each line of dialogue, squeezing out every bit of emotion and humor there is to be found. Lavin’s acting is wide-ranging. One moment she spits out a sarcastic quip. In the next moment, she savors and pauses, allowing for the full emotional impact of her words and for the moment to linger.

Miles Davis is credited with saying, “It’s not the notes you play. It’s the notes you don’t play that make the difference.” In that sense, Ms. Lavin is a master at holding back and leaving the audience wanting more. Even as other characters are speaking, her character’s frustration is palpable as she looks on the verge of speaking, silently trying to get a word in. Her physicality works in tandem. In a moment in the hospital bed, when she is reveling in the delight of a woman with a secret, her toes pop up and wiggle beneath the blanket as if her satisfaction cannot stay on her face alone but must move across her entire body.

These acting moments alone are worth the price of admission.

* Not entirely shocking because it’s the title of the play.