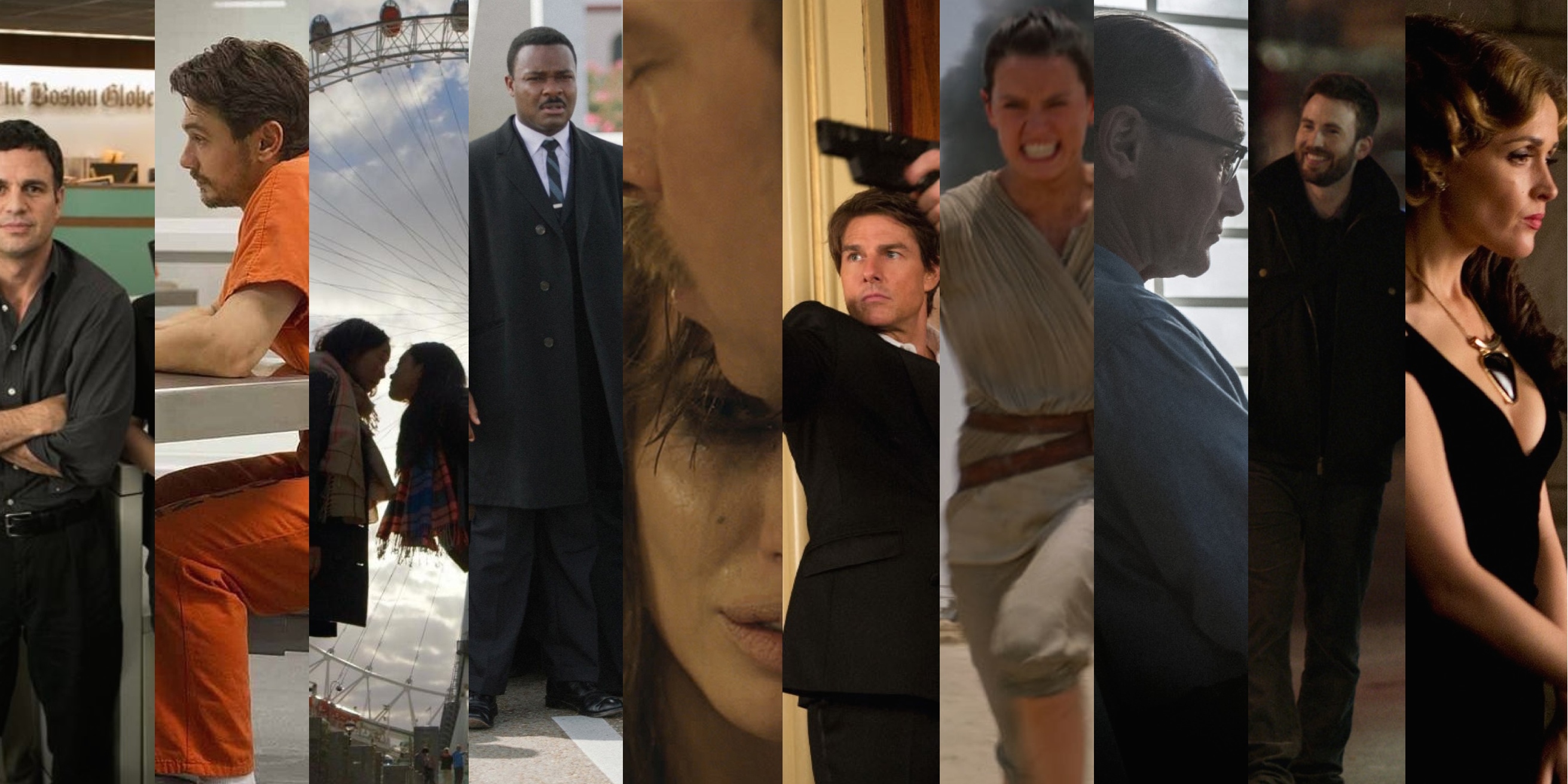 I loved every single movie from here on out. The top 30 of 2015 are really set apart from the pack and this is where the good stuff starts.

21. Spotlight
Please don’t misunderstand what I’m about to say but reviewing Spotlight feels not unlike reviewing a production of The Diary of Anne Frank. There has never in theatrical history been a bad production of The Diary of Anne Frank; it just doesn’t happen and, even if it did, it would probably still receive pretty good reviews. The story told in Spotlight is so intense, so shocking, so moving, so big that the act of telling it is enough. Let Anne’s stirring words fill the theatre and let the praise roll in; your artistic contribution is largely irrelevant. What the filmmakers behind Spotlight do most correct is get out of their story’s way. There are no interesting angles here, no dramatic performances, no clever lines, no interesting set pieces, there’s just the story; and that’s exactly right. As a piece of strictly artistic output, Spotlight isn’t as impressive as many things on this list (there, I said it) but as a piece of storytelling, a show of restraint and priorities and vanity-free dedication to the heart of it all, Spotlight is a remarkable achievement.

22. True Story
James Franco (delivering one of those every-once-in-awhile performances that reminds you why we’re still talking about James Franco) is shot mostly in extreme closeup in this sadly overlooked drama about an accused murderer and the reporter whose identity he stole. There are almost no shots of Franco where some of the picture isn’t missing while Jonah Hill (also on top of his game) and the sublime Felicity Jones (playing Hill’s steel-nerved wife) are shot with stark frankness by the insightful Rupert Goold. This should have been a major movie of 2015; I’m not sure why it wasn’t.

23. Twinsters
The emotional climax comes too early in this so-crazy-it-must-be-true doc about twins separated at birth. From the incredible emotional high of the moment the sisters (one raised with siblings in the US and one raised as an only child in France) meet, the film slows down a bit but you can’t argue with the impact of the story.

24. Selma
This should have been on my list for 2014 but annoyingly over-strategic release scheduling made it a 2015 film by our guidelines (which go by a film’s wide/widest release date not its awards season qualifications). David Oyelowo is transcendent.

25. By the Sea
It annoys me to no end that this film has been called a vanity project for writer/director/star Angelina Jolie. This sad and at times brutal film about depression and sticking it out with your person no matter what is vulnerable, not vain. Jolie is exposed here, her armour of heavy makeup spreading across her face like tar when the tears come and won’t stop. When I left this film, I was not thinking about Jolie serving herself with its creation, I was thinking about the intensity of making it, how laid-bare and ugly and uncomfortable it is. I was thinking about the casting of Brad Pitt as the husband and how the unshakeable bond between him and Jolie permeates the screen and even makes the contented ending seem plausible. At least once I wondered if Jolie would have been able to be as vulnerable as she is in this film if the arms around her in her most devastating scenes weren’t unconditionally loving ones. Both actors are superb and the film is stylish but brave; if that’s vanity by some crazy definition then Hollywood needs more of it.

26. Mission Impossible: Rogue Nation
Did it bother me that there was literally one woman in the entire movie and Paula Patton was mysteriously dropped from the team? Obviously. Did a major piece of plot development happen by way of “look at this sketch, you can feel that he trusts this person”? Unfortunately, yes. But MI5 is yet another excellently executed version of everything the Mission Impossible franchise is and nothing more than that. There’s a killer sequence set to a Puccini opera and another amazing scene where Simon Pegg is strapped to a bomb and blowing everyone away with his spectacular (and wildly underrated) acting brilliance. I got everything I came for and that’s more than a lot of movies give me.

27. Star Wars: The Force Awakens
I don’t know anything about Star Wars. I’m pretty sure I’ve seen the original trilogy once, maybe twenty years ago (before they were redone so, as far as I know, Han shot first), and I’ve never seen any of the prequels. Real Star Wars fans tell me that’s okay. So, when I finally saw The Force Awakens, I was seeing it as a movie fan armed only with the Star Wars knowledge any pop-culture-aware human has acquired through osmosis over the years (meaning the names of the main characters and a few planets, some basic plot points and the colour coding: red = bad). Knowing just the basics, I missed out on the thrill that real fans got when they heard the score again, saw the Millenium Falcon, heard the line “Chewy, we’re home”. But I also got to experience The Force Awakens for the well-constructed piece of mass entertainment that it is. It annoys me when people try to ascribe greater meaning to Star Wars beyond “good clean fun” but, as good clean fun, this installment is pretty perfect. I instantly cared about all the characters (Oscar Isaac most, obviously, because he’s Oscar Isaac), the script gets a few great zingers in there, the story never lost me and the technical execution is fantastic. As far as sevenquels that are basically remakes of the original go, I’d say this is a definite winner. But, again, what do I know about Star Wars? Basically nothing. Be sure to check out our awesome podcast about the film to fully and hilariously understand the extent of that.

28. Bridge of Spies
This Spielberg drama about diplomacy during the cold war is a quiet, complicated story about honour, goodness and how those things aren’t determined by your country of origin. Tom Hanks is at his Hanksy best as a tax lawyer tasked with defending an accused Soviet spy and Mark Rylance is an enigmatic wonder as his mostly silent client. I was delighted that this film didn’t slip into a thriller space but rather found drama in the small terror of having your coat stolen by a gang of desperate young men or that singular human fear of standing alone against what everyone else believes is right.

29. Before We Go
Chris Evans’ directorial debut is sort of like Before Sunrise with a bit more plot and a lot more emotional complication. Small, straightforward and lackadaisically paced, it follows two strangers who meet at Grand Central and fall a little bit in love but mostly just help each other deal with the reality of love in their actual realities. Evans also stars (alongside Alice Eve) and, with all due respect to Marvel, I never love Chris Evans more than when he’s starring in surprising indies (hey there, Snowpiercer) or some form of romance or comedy (What’s Your Number, guys, it’s better than you think). Here he gets to stretch all the muscles he doesn’t get to stretch enough (including his newfound directorial ones) and it’s just plain lovely to see.

30. Spy
This wacky spy caper is excellently plotted and perfectly cast (Rose Byrne is such a delicious comedy villain I never want her to do anything else) but I liked it mostly because it takes its lead character seriously in a way that a lot of wacky capers (or films starring Melissa McCarthy) just don’t. McCarthy doesn’t spend the whole film dressed like a crazy cat lady or falling all over herself for laughs, she’s a legitimate leading lady with goals and hang-ups and mad skills.