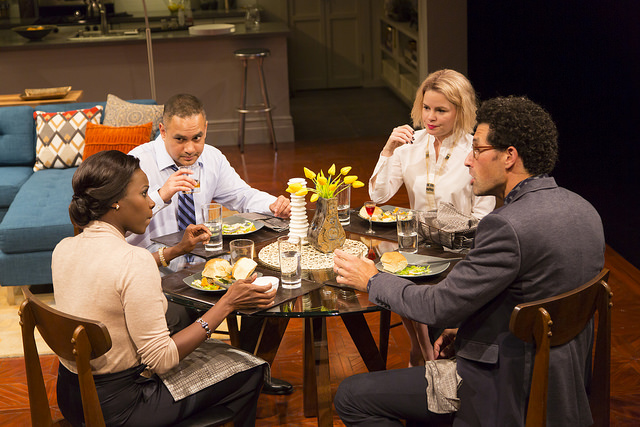 I can usually count on the Huntington to stage a heart-pounding dinner party. Whether its in a familiar story like Guess Who’s Coming to Dinner, or in a new sizzling show such as Smart People, I never tire of swiveling my neck back and forth as if at a tennis match, wondering when the ticking time bomb will explode over the dishes and the silverware.

As with those two shows, the fuse has been sparked over the cutlery once again by difference. Religious difference is at the forefront of Disgraced, by Ayad Akhtar, directed in this production by Gordon Edelstein. Amir Kapoor (Rajesh Bose) is a successful Manhattanite lawyer who feels his painstaking climb to the top has been largely due to ignorance about his Muslim roots. Though they were born in Pakistan, he tells his firm his parents were born in India (technically correct, in 1946). He depends on his Indian last name to avoid association with Islam. When given a statuette of Shiva by his mentor, he says nothing. In Amir’s mind, nobody needs to know.

Amir’s dissembling about his past irks his wife Emily (Nicole Lowrance), who finds beauty and artistic inspiration in the Islamic tradition. It angers his nephew, Abe (Mohit Gautam), who feels Amir has betrayed his people. And Amir’s inability to talk about his personal conflict with anyone, including his wife, sets of a chain of events that inevitably leads to disaster.

Lee Savage’s set speaks volumes before the play even begins. We see a tasteful and expensive apartment, a Western home with Eastern influences poking out here and there. Amir and Emily obviously thrive in this expensive urban milieu. Yet lawyer and painter disagree about the beauties and pitfalls in Islam, a religion, Amir points out, that “comes from the desert, from a group of tough-minded, tough-living people.”

Why settle for one couple arguing about religion when you can throw in another? Jory (Shirine Babb) is Amir’s African American colleague, and she’s sympathetic to his criticisms of Islam and aware of the challenges all minorities face, particularly in their high-pressure profession. Tell that to her mansplaining, pompous, Jewish husband Isaac (Benim Foster), who is more than willing to go toe-to-toe with Amir, even when he doesn’t know what he’s talking about. This foursome will have you on the edge of your seat. Bose makes us sympathize with Amir while still setting off our inner alarm bells. Lowrance endows Emily with patience and consideration while frustrating us with Emily’s inability to understand the stakes of the situation. Foster makes Isaac deliciously asshole-ish and critical, and Babb is able to jump in at wonderful intervals to take Isaac down a peg or two (“It’s racial profiling,” white Isaac says. “Honey,” Jory smirks, “I know what it is”).

Ninety minutes without an intermission, Disgraced is as fleet as it is devastating. And considering you can baldly state you don’t want Muslims to enter the United States and it apparently doesn’t disqualify you from an American presidential race, this play is even more relevant now than it was just a few years ago.

The Huntington Theatre Company’s production of Disgraced is playing now through February 7th, 2016, at the Boston University Theatre.