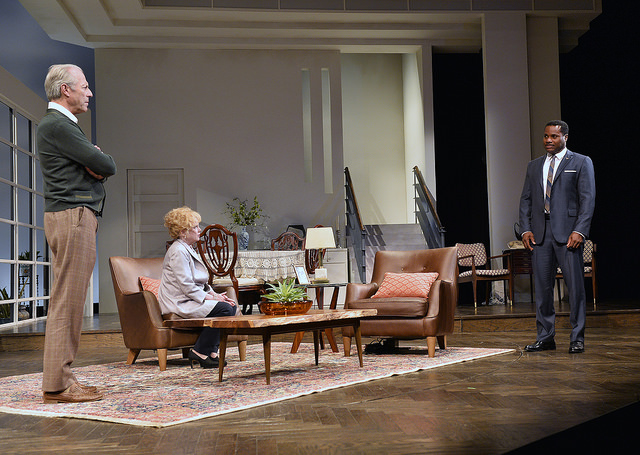 I had the best seat in the house, smack-dab in the middle of the first row, mezzanine level. I surveyed the scene from my perch: non-threatening pastels (light brown, cream, orange tones), a few armchairs and lamps, a large, slightly faded rug beneath the coffee table in the center of the large room. The Drayton home is tasteful but not ostentatious, even a bit spare. Running along the angles of the foyer, living room, and open dining room are wall-length bay windows, looking out onto a terrace filled with plants, and nifty for taking in the…, well, nothing, since the “view” is clouded by thick San Franciscan fog. It is a home on a high hill, a home at once removed from the rest of the world yet proffering transparency, an opportunity to look in, should you wish.

The set of the Huntington Theatre Company’s production of Guess Who’s Coming to Dinner (scenic design by Dane Laffrey) is an interesting hybrid of previous Huntington sets I’ve seen. It mixes the mobile functionality of the Smart People set with just a dash of the hyper-realistic set of The Cocktail Hour. Just when you are getting too comfortable with this proscenium spread, watch for the first scene taking place on the terrace: the set revolves like an enormous Lazy Susan, taking us outside with the characters, offering efficient changes in atmosphere as well as location. The lights help to evoke the rising and setting of the San Francisco sun, and I for one was happy to forgo the need for a gaudily painted backdrop-of-a-view (lighting design by Allen Lee Hughes).

Todd Kreidler wrote this stage adaptation of the hit screenplay Guess Who’s Coming to Dinner (written by William Rose). In this version, Joanna Drayton (Meredith Forlenza), a twenty-five year old daughter of privilege working at a hospital in Hawaii, meets and falls in love with the successful, well-mannered, and older Dr. John Prentice (Malcolm-Jamal Warner). She brings him home to San Francisco for one night to meet her parents, Christina and Matt Drayton (Julia Duffy and Will Lyman). She plans for them all to have dinner; while John has to fly off to New York that very night, he will soon be off to Geneva to do research, and Joanna wants to join him there in a few weeks to get married. There’s only one problem with this optimistic (and rushed) plan: John is black. The Draytons are white. And it’s 1967 America.

This production, directed by David Esbjornson, took a while to find its footing. In order to keep the action fixed in one location (the film includes shots of the airport, an art gallery, a restaurant, a malt shop, in cars), Kreidler rewrote those moments to refocus the action on the Drayton home. Although these revisions were excellent (someone new to the story might not have realized it was an adaptation at all), it made for a lot of opening exposition.

The dialogue in this play is not inherently funny. The humor here depends more on the vocal and facial delivery of the actors, and on the dramatic beats most suffused with high drama. It helped that the crowd seemed particularly appreciative the night I attended, ooh-ing and ah-ing, applauding after each scene blackout, actually gasping out loud when something shocking took place. Three characters were particularly hilarious: Lynda Gravátt played the Draytons’ black maid, Matilda “Tillie” Binks, to great effect, ambling stiffly and with authority around the Drayton home, speaking her mind to whomever crossed her path. I was a little concerned this adaptation would heighten Tillie’s “black woman sass” for audience yuks, but except for the occasional modern exclamation (“Oh, HELL no!”), it was Gravátt’s skills that brought the house down.

The Draytons’ close friend Monsignor Ryan (Patrick Shea) offered caustic wit and brutally honest tough love to the flustered Matt Drayton. Shea’s voice boomed as he served himself Scotch, nervously tried to make very small talk during tense scenes, and generally brought a wave of comedy missing from most of the first act.

Whatever comedy there was in the first half came mostly from Wendy Rich Stetson as the racist and oily (no pun intended) gallery assistant Hilary St. George. Her “supportive” little speech to Christina peppered with insults and “advice” on how to deal with the situation is one of the best scenes in the whole show.

While the script itself is not terribly witty, I enjoyed how some of the adaptation’s dialogue made for new points of discussion, leading to greater depths of poignancy and highlighting the real seriousness underlying the plot’s subject-matter. A lengthy discussion of the historic Joe Louis vs. Max Schmeling fight provided a fun diversion from the plot, and revealed much about the characters of both John and Matt. Even small details often had positive results: making Joanna just a few years older than the film original, and having her actually work in John’s hospital added just the right touch of realism. This Joanna was more of a woman than the bubbly Joey that Katherine Houghton played in the film. Forlenza was wise to not try to emulate Houghton, but rather make a new persona that gave the production a more contemporary feel.

Unfortunately, other side plots were much less effective. There was a long digression into John’s childhood, particularly a memory centered on his Southern grandmother. It offered a moment of interesting identification between him and Tillie, and later between Tillie and John’s mother Mary Prentice (Adriane Lenox). But these scenes felt like filler to extend the second half of the show. They also lessened the power of the very real antipathy Tillie harbors toward John in the film. Tillie’s distrust and intolerance of a black man she perceives as acting too “white,” reflected later in John’s argument with his father, John Sr. (Lonnie Farmer), becomes muddled if you infuse several minutes of the play with nostalgic reminiscences of songs and shared experiences. There’s enough substance in the argument between John and his father on the complexity of raising a black son in America without having to marinade their background in Southern charm.

The biggest mistake the new adaptation made was to add a “dead younger brother named Michael” subplot. It is mentioned briefly in an early scene, clumsily alluded to in the later scenes, and generally does not add more than small ripples in the atmosphere. Combining this “lost child” with the extra anecdote of Matt Drayton accompanying Tillie on a train ride years ago made it seem like the playwright was worried we wouldn’t find Drayton likeable enough, considering his resistance to the marriage, if we didn’t suffuse his past with extra pain and sympathy. Lyman performs excellently in the role, and has more than enough dialogue with the equally excellent Julia Duffy to demonstrate Matt’s good heart, existing (if slightly buried) ideals, and deep conflicts regarding his desire to protect his daughter, without adding such drama to his past.

The success of this production, beyond some good performances and good staging, rests on whether it actually has anything new or powerful to say that you couldn’t get from the film. The biggest risk was for this show to highlight just how safely removed we are from the intense years of the 1960s. While a few moments in the production risked this remove, one in particular stands out (warning: it’s a funny joke I’m about to spoil).

Near the very end of the play, John Prentice, Sr. makes a comment about how, while sitting (in a huff) in his car outside of the Drayton’s fancy home, it occurs to him that someone will probably assume he is casing the place. This unexpected, clear-eyed, modern-sounding realization made the audience roar with laughter. But when I stopped laughing, I realized that I was sitting in a liberal, integrated, 21st century audience. I could interpret our mirth in one of two ways: if I wanted to be a bit more acerbic about it, I could argue that our laughter demonstrated how we couldn’t really connect with this moment in 1967. We can pat ourselves on the back for no longer living in a country that has segregation and discrimination built into its laws, and where to be called a “racist” is to be publicly shamed (and most likely to be in danger of some form of legal prosecution). In light of such progress, perhaps we are blind to how racism and cultural misunderstanding continue to bubble and seethe in everyday life (as recent events in Ferguson, MO have shown); this would be an example of the period piece remaining, well, period, and offering little relevance to our current state of affairs.

One could argue that. But, on the one hand, perhaps we laugh because we know that, sadly, not much has changed. That joke would serve perfectly in any stand-up comedy routine by Chris Rock or Dave Chappelle; we as a modern audience recognize the cultural prejudices that have become implicit rather than explicit, and though we laugh, we feel that pin-prick of realization.

While I can safely say that Guess Who’s Coming to Dinner is a fun night at the theater, I had trouble seeing how the production had anything new to say about current race-relations. The play I saw felt like a fun reboot of the light-hearted film classic; while certain changes did revitalize the production, adding some tension and making some characters more complex and fully-dimensional, I’m not convinced it brought a contemporary sensibility to the well-worn story.

The Huntington Theatre Company’s production of Guess Who’s Coming to Dinner is playing Sept. 5 – Oct. 5, 2014 at the Avenue of the Arts / BU Theatre.