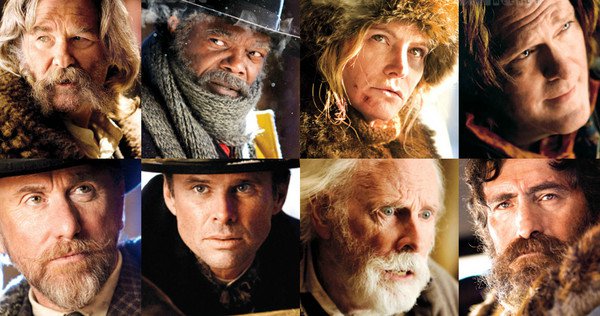 [Editor’s Note: I shouldn’t need to warn you about language and “adult themes” in an editorial about The Hateful Eight but… yeah]

When Quentin Tarantino burst onto the scene with Reservoir Dogs, it was clear the trajectory of his career was going to be built off scintillating dialogue, violence, and an underlying theme of men jockeying for positions of power.

There’s an inherent male-ness in Tarantino movies and plenty of overt phallic imagery in The Hateful Eight specifically. To get a sense of what I mean, let’s look back.

If you look closely at each of his films, these threads trail across all of them: the Reservoir Dogs shootout, Pulp Fiction’s hitmen/Marcellus Wallace, Inglorious’ Basterds versus the Nazis, and Django’s killing of Calvin Candy.

Whether or not the film even has a male in the leading role, this theme continues. Kill Bill is very much about Bill’s lust for control on The Bride’s life and in Jackie Brown the story is about keeping her beholden to her drug dealer.

So, when I went to see the Hateful Eight, I was not concerned with whether or not I was going to like the film – Tarantino is often polarizing and in 70MM I expected him to be no less. I was more concerned with how his theme of “men and power” would pop up in a movie that was billed by many as a Western-Murder Mystery.

Even I was surprised at how overt this movie made its metaphors – metaphors that were born twenty-five years ago in a little movie called Reservoir Dogs. Tarantino fans will note that in the opening of Reservoir Dogs we have characters assessing that the song “Like A Virgin” is all about “big dicks.”

It is my assessment that, in his latest western, Tarantino has taken that idea one step further and created a movie entirely about eight men trying to figure out who has the biggest dick… I know that is going to sound preposterous to many reading this but I ask that you hear me out.

If you came looking for another person saying how much they loved 70MM, you went to the wrong place because my projector broke ten minutes into my showing.

For those of you who have not seen the movie stop now – SPOILERS BELOW.

I’ll be calling each character by their actor’s name because I only saw the film once in theaters so it’s much easier to remember and I won’t mess it up. Probably.

The movie begins with Kurt Russell meeting Samuel L. Jackson on the side of the road and the two of them bargaining for a ride to the nearest town. A ride that has to be interrupted because of an impending blizzard.

Russell threatens Jackson with a long barrel pointed out of the stagecoach at him. This is the first of our phallic metaphors and the one that matters most moving forward. Russell also picks up Walter Goggins on the way. Disarming him as well as everyone else inside Minnie’s Haberdashery upon their arrival. He’s carrying precious cargo, Jennifer Jason Leigh, and doesn’t want anyone to get the jump on him. Fair enough.

In the beginning of this movie we are told that Kurt Russell has the biggest dick and he’s waving it around, usually to remind them that, if they step out of line, he’s not afraid to use it.

As the story progresses, we’re invited to size up the other men in the room. Bruce Dern, a hobbled old man who can’t move from his chair. He’s a representative of the South, a former Confederate General in the territory looking for his son. Since he barely moves, except to utter racist lingo, you can assume his dick isn’t working.

Walter Goggins assumes his position with newcomers Michael Madsen, Damien Bashir, and Tim Roth as guys whose dicks are collected by Russell. Therefore they can’t wave them around. They’re also segregated into corners of the establishment, lest they still use their balls to stop trouble.

They’re also regulated to the same fate as Jennifer Jason Leigh’s character – dickless at the mercy of Kurt Russell.

The only person still left with their dick swinging is Samuel L. Jackson. You could argue that this is explained by Kurt Russell wanting/needing backup in this situation but, as Tarantino shows us before the intermission, it’s actually to tell us a story about how big his actual dick is while he lends Bruce Dern his symbolic dick to justify killing him.

Dern, outraged that his son’s own penis would be overshadowed by Jackson’s, finds feeble courage, reaching for the small pistol left for him by Jackson. Meaning, even though he’s old, he can still get it up…long enough for Jackson to shoot him.

Did you get all that? That’s some meta-dick. Second layer dong.

Now, as Kurt Russell and his stagecoach driver, whose dick never mattered, are offed by the poison coffee, the dick regime is allowed to change.

See, Kurt Russell’s swinging dick was brought down by the only thing that could take advantage of it – that being the iron-clad balls of someone else in the room that poisoned the coffee.

The only other person in the room with balls big enough to change the course of events is Goggins – a sheriff desperate to prove that, in the demise of Russell, he has the biggest dick in the room.

This is where things get weird and interesting.

For the first time in a Tarantino movie, we have a character in Goggins who is handling the big dick but is not cocksure.

He has no idea who is on his side – but he does know that these are some bad men itching to kill him and assert their dick size. It even seems Jennifer Jason Leigh has a bigger dick than him…and, as mentioned before, Tarantino goes out of his way to show her as powerless in many ways – especially dickless.

As the interrogation of the men about the poison happens, you have a lot of Samuel L. Jackson asserting he’s the biggest dick in the room.

But how do we defeat guys with big dicks?

Shoot off their balls. Literally.

Tarantino could have picked him to be shot anywhere else – any other wound – but he wanted Sam Jackson alive, but clipped.

Tatum pays the price by getting his head blown off but, as Jackson is forced to lie in the bed and contemplate his existence as he bleeds out, we see the dick-power start to decrease.

Now, in the end of this movie, three things happen. The first being that Madsen, Roth, and Bashir all grow a pair of balls when Sam Jackson’s nuts are blown off and go for guns hiding around the Haberdashery. They all pay for their actions with bullet wounds from Goggins and Jackson. Two men who, with their penises damaged but not shot off, are forced to assert their power.

Second to all this, Goggins needs to make a decision. Does he swing his dick around to turn on Jackson, ending up as the top dick in the room when no one thought he would? Or does he team up with Jackson to hang Jennifer Jason Leigh, who has been dickless this whole time and will remain that way if he kills her?

Here’s the first contemplative dick move made in the movie since killing off Kurt Russell. Now it’s psychological.

Goggins and Sam Jackson together make a full set. Jackson may not have his nuts but wielding his gun he still has his dick. Goggins had the nuts to get the gun but isn’t cocksure enough to wield it. It’s this necessity of a pair of both dick and balls that drives them together.

Once teamed up, it’s up to them to assert what the dick and balls from earlier wanted – the dick and balls named whatever Kurt Russell’s character was called. He wanted Jennifer Jason Leigh hung…and since there’s no other dick around to do it, and since you need some balls to hang someone…these guys prove they’re up to the task.

You may have read this and thought “that’s ridiculous” or “this guy is reading way too far into this movie” but then I ask you to really think about the Tarantino films you’ve seen in the past. Think about his versions of masculinity as it applies to father figures, brothers, and posses. Think about how he shows who has the power in what situation and how that power is taken away from them.

You still want a traditional review?

Did I like Hateful Eight? It was fun but the three hour and seven minute version seemed a bit long to me. Sally Menke’s absence was felt here more than any other Tarantino film since her passing and I really hope he finds an editor who gets him to trim. There’s a beautiful two-hour movie in there.

The score is bonkers – in the best way possible. Elegant, enticing, a real mixture of tension and excitement.

The acting is good – some standouts in Jennifer Jason Leigh and Goggins but the others feel more one-note. Since they don’t have arcs it’s hard to judge on anything besides how much apparent fun they’re having. It’s palpable and a shorter movie would showcase this more effectively.

I love Tarantino – the guy makes going to the theater a necessity – but I’m over his western phase. This one fell short of the previous two and I’m hoping he has another arena that interests him after this film. His mind is so active and, if he truly only has two movies left within, him I’d rather see him do something completely insane like a space movie or a romantic comedy. What does his Close Encounters look like? What’s his When Harry Met Sally?