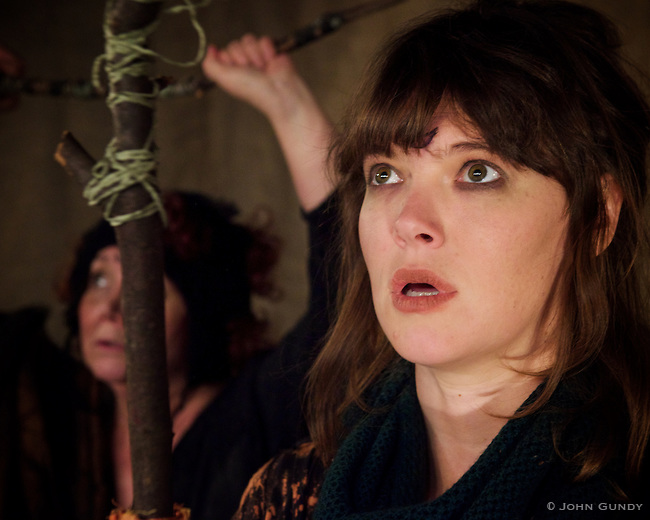 Dean Gabourie‘s sparse and tonally conflicted staging of Howard Barker’s The Castle seems to feature every actor you’ve ever seen at the Storefront. There’s the ever-reliable Sean Sullivan hamming it up as the builder Holiday and Brenhan Mc Kibben, enigmatic and steady as the sidekick-y Batter. The design team, the photographer, front of house and the fight captain- Storefront stalwarts all. Predictably, ironically, perfectly- whatever you want to call it- the play’s central castle-builder is dynamic Storefront impresario Benjamin Blais, holding down the fort and sucking up the air in equal measure as the man at the centre of the action: Stucley, a seemingly decent but backwards and temperamental fellow who returns to his homestead after the war to discover his world has been feminized beyond recognition. His beloved wife (Linda Prystawksa) has taken up with a local witch named Skinner (Claire Burns) who temporarily upsets then continually rages (helplessly, tragically) against Stucley’s re-encroaching patriarchal world as represented by his titular construction project.

The production is intermittently broad and beige (both tonally and literally with a stark canvas backdrop), full of competent performers doing strong work of little emotional interest and inconsistent accent (are we in Britain or not?!). All the Storefront usuals are doing their thing and doing it pretty well but it’s only when Artistic Producer Claire Burns steals centre stage from her flashier co-conspirator that the show has any real punch. Burns plays the defiant Skinner with the sort of purposeful naturalism that suggests a backstory defined by years of hard-won zero fuck giving. She simmers and screams and loves brutally, possessively and deeply. She breaks hearts, she shows her ass (a delightful harnessing of her sexuality as a moment of pure rudeness), and she saves something that I otherwise could only have called ambitious but bleak.