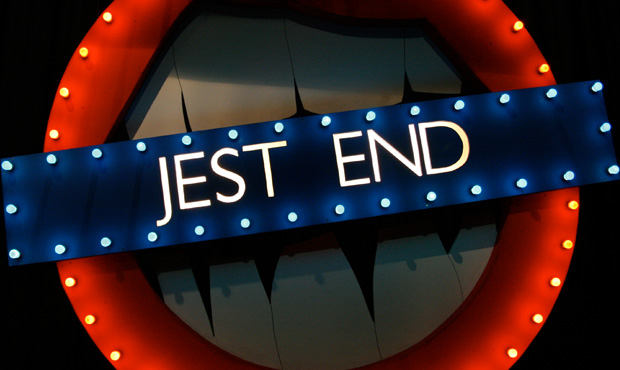 An enjoyable evening of roasting the current crop of West End shows, Jest End is amusing, loud, well executed—if not slightly under-polished at times—and a whole load of fun for anyone who is up to speed with London’s musical theatre.

The structure is simple: take the music of any song from a West End show and rewrite the lyrics to highlight and mock the flaws of a personality, musical or the industry itself with as much tongue-in-cheek as possible. Throw in four talented performers, entertaining choreography and a lot of laughs and you’ve got yourself a lovely little show just south of the river in the Waterloo East Theatre.

You are treated to a whole host of musical numbers, many of which are filled with endless jokes, whether it’s a dig at Andrew Lloyd Webber’s less successful recent shows, the difficulties of being an ensemble performer, or the never ending run of Les Miserables. With the plentiful collection of well-written pieces there does also come some more forgettable and less rounded renditions, and though the show does handle its farcical nature well and manages to avoid stepping over the line into complete silliness, there are occasional moments that would benefit from being scaled back. At times, some of the humour is slightly unoriginal and repetitive—a rift between the two leading ladies in Wicked feels overdone, and there are only so many times you can make a joke about the high cost of going to the theatre. That being said, Gary Lake’s writing is overall very good, cleverly poking fun at London’s theatreland without becoming self-righteous.

The ensemble of four are all entertaining and witty both individually and as a group, demonstrating an array of characters in their perfectly timed comedy performances. This, coupled with their faultless singing voices, makes for a winning formula that could quite easily fall flat were it not for the intelligence and talent of the cast. While all should receive plaudits for their efforts, Scott Garnham in particular is deserving of mention for his impressions of both Killian Donnelly and John Barrowman. Not only does he encapsulate the essence of the actors’ personalities and mannerisms when performing, but he also effortlessly belts out his songs with a beautiful tone that equals that of the stars he is impersonating. The standout number in the show, however, is an alternative version of Supercal from Mary Poppins that mocks the choreography used in modern shows and the apparent ease of fooling an audience into being impressed. On occasions lines are missed during the production due to both technical issues and delivery, which given the nature of the show can cause problems. This luckily isn’t a constant issue though and so is only a minor irritation.

It is difficult not to make comparisons with Forbidden Broadway, Jest End’s more established and incredibly successful older cousin from across the pond that briefly made an appearance at the Vaudeville Theatre last year—when watching, and while this show doesn’t quite match the quality writing and slick execution of its American counterpart, Jest End has enough charm and charisma to be forgiven for these shortcomings. The show does require a fairly thorough amount of prior knowledge of the West End from its audience and I would imagine there isn’t as much to get out of it for casual musical fans. If, however, you have seen most of the musicals in town and always have your show tunes playlist blasting through your headphones then this is a show to not to be missed.

Jest End has a limited run and is at the Waterloo East Theatre until Sunday 6th December.