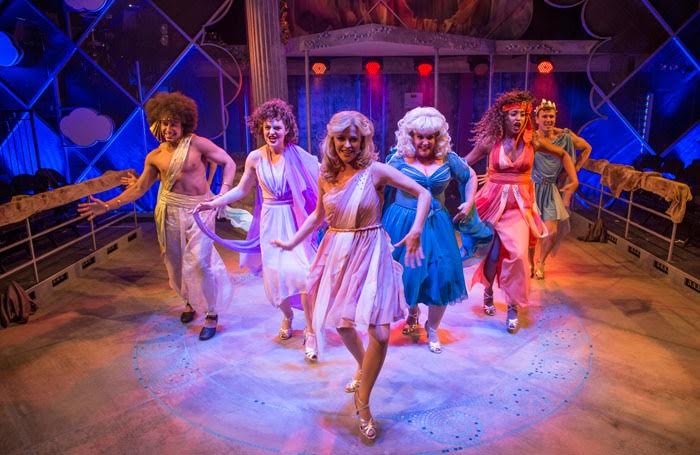 Xanadu at the Southwark Playhouse

Adapted from a 1980s film that is credited for being the reason ‘Worst Film of the Year’ awards exist and taking its score from the songs of Olivia Newton John, I wasn’t expecting Brecht from this production of Xanadu but did approach the show with an open mind and the hope that it would live up to the hype of its reasonably successful Broadway run. Sadly, this hope started to disappear somewhere in the opening number and quickly turned into despondency and despair.

I think it is important to mention before continuing with this review that my main issues lie with the show itself and while in most cases I would prefer not to dwell on the problems of a book or score, in this instance I feel it is important to present these issues.

The musical tells the story of a troubled artist who is visited by a Greek muse from one of his paintings, posing as an Australian mortal, and tasked to help him find his inspiration. Overcoming evil sisters, gods and businessmen, they begin to fall in love as they pursue the artist’s dream of building a roller disco. The show is a total farce from start to finish, which wouldn’t be a problem if it wasn’t lacking a solid comedic undercurrent, and so instead of being light hearted and tongue-in-cheek it quickly becomes gratingly unfunny with a notable absence of intelligence in the writing. The jokes are unoriginal and cheap, not least the stereotypical Australian slurs that are repeated throughout, and you are dragged through an inexistent plot that lacks any sort of underlying message or heart. On occasions I did chuckle, but there are not nearly enough funny moments to recover the show’s many shortcomings. I admit I am a sceptic when it comes to jukebox musicals (although having just seen Beautiful this scepticism is reduced somewhat) but with Xanadu there seems to be little attempt to do anything interesting or different with the songs and rather leave them as the fairly uninspiring and outdated 80s anthems they are.

The performances themselves are generally fine—the cast all give it a bit of welly and get stuck into the show. Samuel Edward’s voice has a lovely tone and range and he sings perfectly pleasantly throughout. Sometimes in his acting the delivery is slightly mistimed and his performance could have benefited from more variation, but overall he did fairly well with a one-dimensional role. Carly Anderson does a good job as leading lady Kira, providing some of the funnier lines and proving her worth with an impressively powerful and beautiful voice. She also deserves plaudits for her roller-skating, or more precisely roller-dancing, skills. Spending most of the show in skates she commands the space effortlessly. Alison Jiear and Lizzy Connolly sadly slip into pantomime villain territory in their roles as Melpomene and Calliope, though their songs ‘Evil Woman’ and ‘Physical’ are quite enjoyable and filled with enthusiasm. The chorus numbers are loud and sassy but occasionally some of the quality in the singing is lost in exchange for volume.

The choreography is fun and energetic if not a little unoriginal at times. ‘All Over the World’ is possibly the highlight of the show, largely down to Nathan Wright’s intelligent routine. He should also be applauded for his work with Anderson and the rest of the cast when using roller skates, particularly during the final number. The direction is a touch messy and would sometimes benefit from being reigned back in, although there are some clever moments and good uses of set and props.

As has become reasonably popular at the Southwark Playhouse, the show is set on a thrust stage so that the audience are seated on three sides of the performance space. In the past this has worked to great effect at this venue, and while the dance numbers tend to incorporate all three sections very well, many of the scenes focus too much on the middle block, isolating those sat in the other two sections. It is always difficult to stage a show when you are not using the traditional proscenium arch but I have less sympathy knowing that previously it has been successful at this theatre.

I take very little joy in criticising this show as I am an advocate of theatre companies that bring new and different shows to London. This, coupled with it being held in one of my favourite venues in the city, is what led to my anticipation at the opportunity to see this show and production. There were a good few people in the audience who seemed to get something out of the production, but unfortunately Xanadu is a big disappointment for me and is not a show I will be rushing to see again anytime soon.