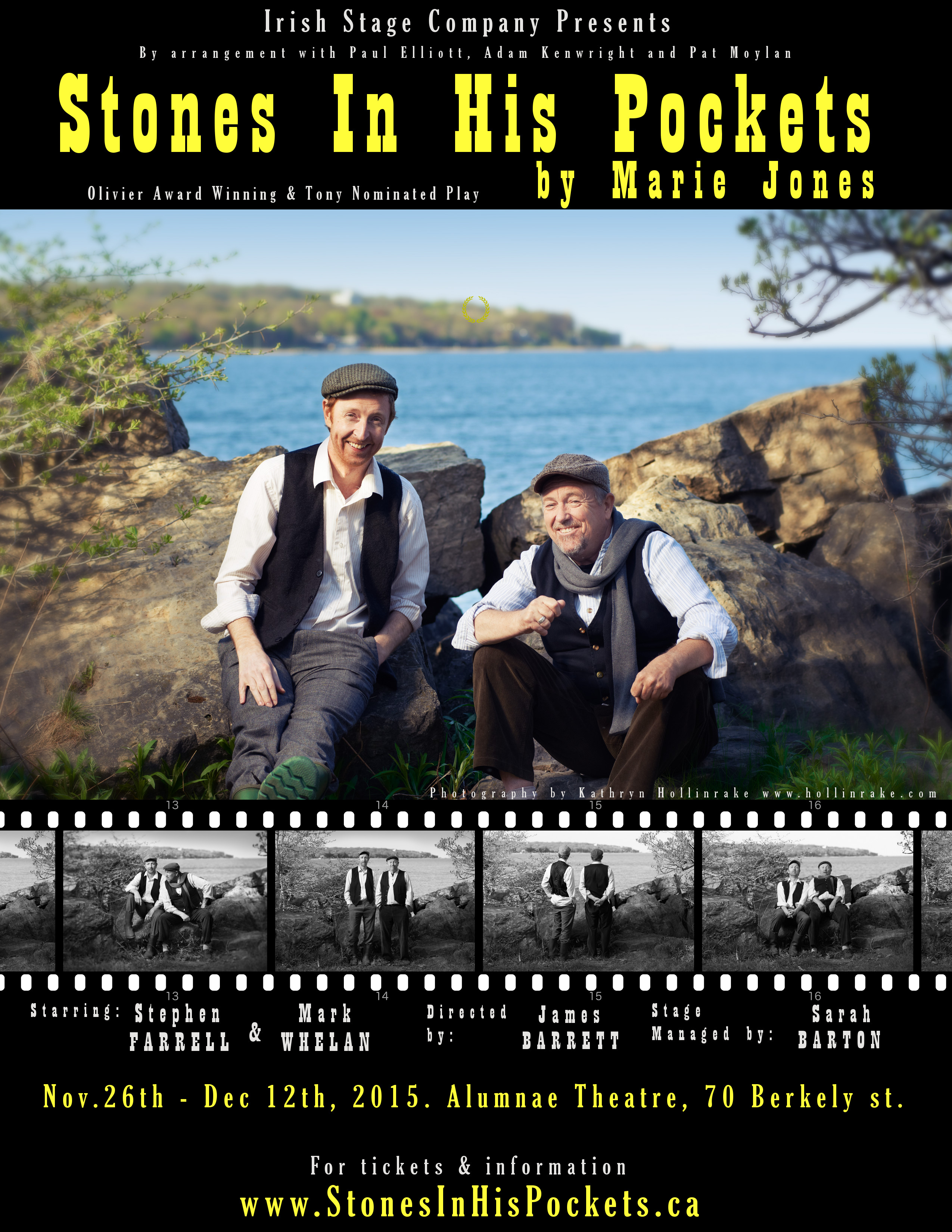 Stones in His Pockets

Directed by James Barrett, Stones in His Pockets is a two-hander performed by Ireland’s own Stephen Farrell and Mark Whelan. The lights come up on two Irish extras, Jake and Charlie, in a big Hollywood production that has descended on County Kerry, Ireland, to shoot the feature ‘Quiet Valley.’ But Farrell and Whelan play all the characters, including the cinematographer, the set manager, the director of the show, a series of small town characters and even the female lead of the movie.

The story is a very Irish one, by which I mean we see the characters at once in awe of the sophisticated Brits and Americans who have infiltrated their small town, but also resentful – a resentment that only increases as the show progresses. The movie within the play is about a small township of people who are saved by the upper class, deus ex machina style. The film seems like an overly-romanticized view of Ireland for Jake and Charlie, who go from chuckling with each other to quietly protesting under their breath how unrealistic the whole thing is.

In fact, it becomes more and more clear throughout the play that the Hollywood folks are not only completely out of touch with the town that they have descended upon, they have little to no interest in getting to know them on their own terms. When a tragedy strikes, most of the production team try to push through as though nothing has happened, and it’s only the lead actress who intervenes to help. But it’s not clear if her help is genuine or a bid for attention, or if she’s even able to tell the difference between the two. By the end of the show, Jake and Charlie are ready to take control by telling their own story, in their own way, Hollywood be damned.

The show is sweet and entertaining and mostly easy to watch. There are definitely hokey moments but these are balanced out by others with more emotional depth. What struck me is that the acting ranges from annoying to remarkable. There are moments when it feels as though the dialogue between Charlie and Jake lags, like they are forgetting to think about what the words they are speaking are doing. Farrell’s portrayal of the oldest man on set – Mickey – is a bit one-note for my taste, though he’s excellent at depicting Jake’s internal conflict. And Whelan’s portrayal of the lead actress is strikingly human and nuanced. It borders on comic but never becomes caricature, and for a while I actually forgot I was watching a man perform.

This is a good show to catch if you’re feeling whimsical or nostalgic, or you’re in the mood for some excellent Irish dancing.