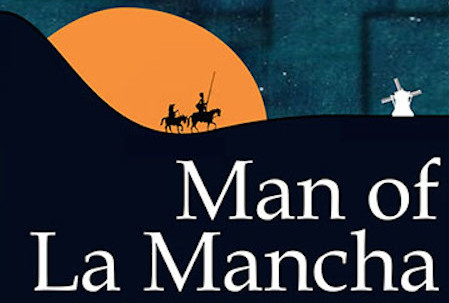 Bridewell Theatre offers a very entertaining evening about the struggle between reality and stories. The musical adaptation of Cervantes’ novel, Don Quixote de La Mancha, directed by Roger Harwood and Dawn Harrison-Wallace, portrays this beautifully. Unlike Cervantes’ novel, Man of La Mancha is about both the author and the characters. Dale Wasserman’s adaptation keeps every famous element of Cervantes’ work into the story, but adds a dimension about Cervantes himself. It intertwines reality and fiction in a very interesting way. The audience is sometimes unsure when it is Cervantes and when it is Don Quixote’s story that is being told. The original novel is about Don Quixote de la Mancha, a self-proclaimed knight travelling around with his sidekick, Sancho, in an effort to revive chivalry in the world. He sees ogres where there are windmills, and beautiful noble women where there are but simple servants in a house.

Not many people would know what to expect of music in Don Quixote. In this performance, the fusion of musical theatre and Spanish melodies is well done. Although the songs are slightly too predictable in their timing and a little bit too frequent at times, the music is nonetheless well brought into the production. It is simple but fits the purpose. It is another medium to tell the story and adds well to the performance. The voices of the actors, especially that of Kate Gledhill, playing Aldonza, and Chris Starkey, playing Don Quixote and Cervantes, are absolutely fantastic. They sing with such passion and emotion that the audience is completely taken by the songs.

As the play begins, the spectators are submerged in a medieval world with sounds of peasants moaning and expressing their despair. As people walk in, already actors are on the stage, dressed in peasant’s attire, looking sad and cold. The set design truly brings the setting of the musical to life. Very accurate with a clear attention to detail, it is still minimal enough to allow the performance of the actors to outshine the décor. The main characters are definitely the strong point of the performance. Indeed, Gledhill and Starkey, as well as Stephen Beeny, portraying Sancho, are reason enough go see this musical. Each of them brings humor and empathy in their own ways. Aldonza is upset that Don Quixote’s sees her as someone she is not, but Don Quixote himself is so taken by his ideas of chivalry read in books that he does not understand why Aldonza does not appreciate his affection. This is but one of many moments where the audience is at one with the actors, because they play the scene so well that everyone can relate to what Aldonza and Don Quixote are feeling.

Man of La Mancha promises a lovely night out for those wishing to watch a traditional musical that is both well-acted and well-directed. It is on until December 5th.