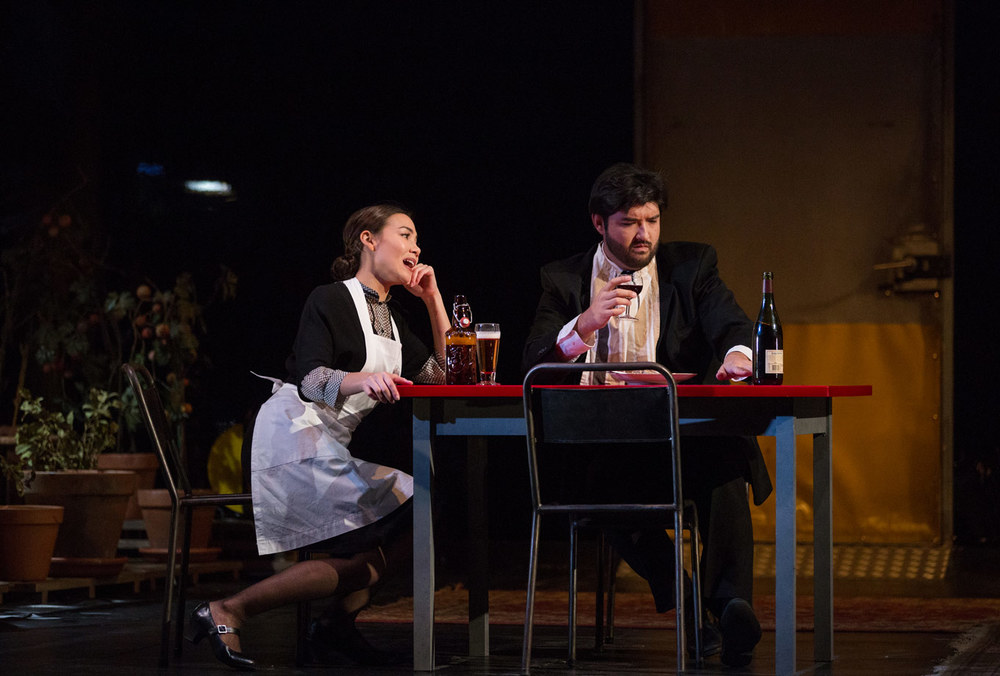 Both of Canadian Stage’s current offerings are about people sleeping with people they shouldn’t be sleeping with. Both remarkably self-satisfied domestic dramas purport to be about “so much more” but that’s really about it.

In the one-act contemporary opera Julie, well-to-do scorned woman Julie (Lucia Cervoni) sleeps with her callous, manipulative, engaged servant Jean (a sublime Clarence Frazer, stealing the show with a sultry and brutal performance). Jean’s fiery fiancée Christine is played by Bachelor standout Sharleen Joynt (winner of the 2014 “Best Female Reality Star” MyTV Award). Her voice sounds lovely and she does as much with the role as she possibly can but I spent a fair amount of the draggy, dully directed production thinking about how much more interested I am in Sharleen Joynt than in the absurd, outdated, unrelatable action of Julie (which, for some reason, plays out here inside what appears to be a large yellow tent instead of a proper servants’ quarters). Joynt is funny, vibrant, defiant and romantic. She’s most famous for falling hard for a hated man and leaving him heartbroken in the name of self preservation. In Julie she makes stew. If our grand stages can’t even match the compelling human drama of The Bachelor, of all things, something surely has gone remarkably wrong.

Similarly, but completely differently, the casting of Domesticated can’t help but alter the lens through which it’s viewed. Paul Gross and Martha Burns are titans of the Canadian arts landscape, a long-time married couple whose most famous collaboration solidified Slings & Arrows’ Geoffrey and Ellen as arguably Canadian television’s most beloved love story. It feels very strange, then, for them to be playing a terrible couple in Domesticated. Destroyed by his very public infidelity, the marriage of Bill and Judy does not have the ring of new tragedy but rather seems built on a shaky foundation of mistrust and deep-seated resentment. The somewhat simplistically drawn characters don’t make use of Gross and Burns’ chemistry or connectivity but, rather, they force the couple to underplay those qualities and replace them with a gulf of hurt. Individually, Gross perfectly captures Bill’s self-righteous bluntness and untrustworthy charm and Burns is radiant releasing her outrage in strategic bursts so she doesn’t explode, but it seems a waste that a rare collaboration should take this form and waste the “greater than the sum of their parts” nature of Paul Gross and Martha Burns together.