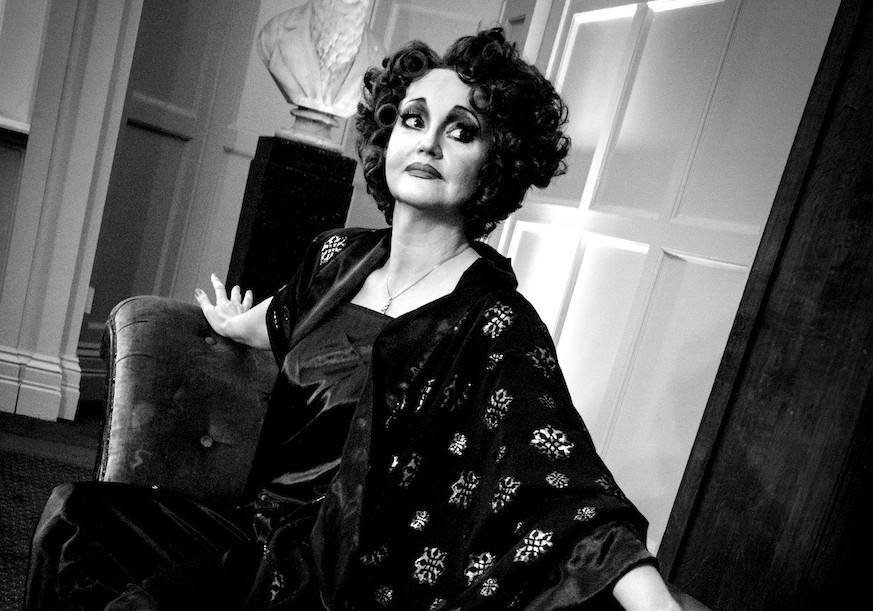 Staged at the Bridewell Theatre, Geoids’ latest outing is one of the most technically ambitious productions within London’s amateur scene. A huge cast, set and orchestra are used to recount the problem of an eroding Hollywood. For those unaware of the film (which you should all see, incidentally), Joe (Michael Stacey), a failing screenwriter, is thrust into a perilous working relationship with ex-movie star Norma Desmond (Susan Booth); as their transgressive bond strengthens, a critical angle energies, equally admiring and decrying the Hollywood of the fifties and its dark essence.

Designed like a movie set, director Dominic O’Hanlon has the action of the show occur while it appears to be filmed by an omnipresent set of cameraman. It is another level of illusion and works conceptually well. What does not is the relative clutter of the stage: due to the Bridewell’s long and narrow shape, the just over twenty-strong cast struggles to fit and more importantly be heard; tech issues result in the numerous roles of the score being inaudible over the orchestra. The orchestra, whose number is similar to that of ensemble, perform extremely deftly given the difficulties of Lloyd Webber’s notoriously terse arrangement and musical director Sarah Burrell must be acknowledged for her handling of it. The set design efforts of John Winters, Roberta Volpe and Justin Heister are the most noteworthy: their outstandings recreations of Norma’s mansion and various studio interiors rival and better those of a higher-budget, professional work.

Regarding the actors: Michael Stacey is a competent Joe, showing the weariness combined with the perverse desire for Norma. Susan Booth does Norma remarkably well, balancing fearful haughtiness with a emotional sensitivity that comes through best in her singing voice.

It is a shame then, that the musical itself is a poorly commercialised replica of the 1950 film. Despite the production’s best efforts—and here I am to referring the qualities of the Lloyd Webber, Black and Hampton collab and not Geoids’ endeavour—there is no avoiding the ersatz personality of the lyrics and music. The work is copious with nagging refrains and over-expository dialogue: whereas Joe’s diction fits his noir sensibilities in the film, here it is marred by the many identikit Broadway-ish melodies that permeate the score. Black and Hampton’s pastiche of the original’s elements puts the show’s gloomy content into a horribly flippant light: Norma’s attempted suicide is treated by Joe with an ‘Oh, dear!’ exclamation here. Geoids cannot work through these innate difficulties and so the result, while imbued with effort, never reaches that higher level of quality it desires.