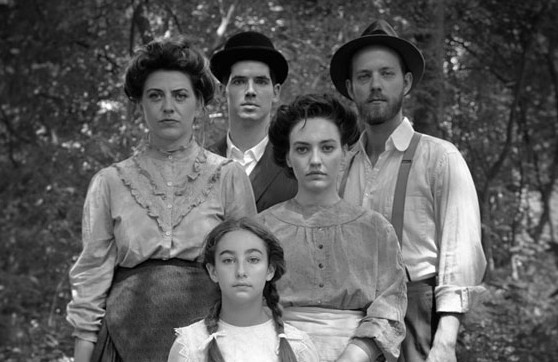 While fearless in many respects, my active imagination makes sitting through most horror films, shall we say, difficult. Actually, I can generally sit through them just fine. It is only when I am sitting home alone at 3 am typing up a review that the problems start.* Therefore, it was with great trepidation that I accepted an invitation to review Pipeline Theatre’s production of Andrew Farmer’s The Gray Man. The Gray Man is both a traditional boogeyman story and a nightmarish urban tale and, in it, Farmer melds bedtime parable with (very real) daytime danger to explore two haunting aspects of life: loneliness and loss.

The Gray Man is presented in the round in a black box-like space, and the show relies heavily upon atmospheric elements such a pitch black and dimly lit sequences, fog machines, and a constant redirection of the senses to build a general sense of foreboding. The play opens with two women warning their unseen children of the dangers of not listening to ones mother, introducing the bedtime story of The Gray Man who, with a mouth glistening of gold, demands that young people take unspeakable and dangerous actions – leading, in time, to their demise. Good children who listen to their mothers are spared.

The lights rise as a grief-stricken and jumpy Simon confesses to his friend John, who is sleeping in his apartment, that, since his mother died, he can no longer handle the incessant noise and tension of the city. John, running late for a date, promises to take Simon away from the city, much to Simon’s joy. While John is away, Simon runs into two women on the street and they converse about the protectionist role that mothers must play in their children’s lives. Simon proposes that a mother must watch and protect her children without fail or deviation. The women find such a notion preposterous because mothers, after all, need their space. One of the women has a daughter, Grace, who enjoys watching Simon from the adjoining apartment, and the pair forms an unlikely bond in their loneliness. When children begin to go missing in the claustrophobic community and mysterious screams are heard emanating from Simon’s building, the women confront Simon, who escapes their torment by fleeing into the woods with his dependable friend John.

Or is John a friend? Does he even exist?

Farmer’s play shows great promise, from his choice to set the play in a crowded, working class urban neighborhood – a tense and overwhelming setting that many people associate with potential danger – to his eloquent development of the character Simon, a seemingly innocuous, tender hearted man who may or may not have a sound mind. The playwright does a splendid job of mixing reality and fantasy, leaving the audience to wonder precisely what interactions actually occur and which are the sole products of Simon’s mind.

Farmer’s failings as a storyteller stem from a seeming disconnect between what he is trying to develop and what ultimately occurs on stage. Of particular issue is the character of John. I will do my upmost not to spoil the ending, but, suffice to say, it is quite clearly from the play’s open that John is not who he claims to be. From his nonchalant behavior (e.g., why is he leaving Simon so frequently if he is staying at Simon’s home) to the oddity of John’s relationship with Simon (e.g., how did Simon and John meet – their personalities are so different), the numerous queries and doubts raised from the outset of the play result in a less than shocking revelatory moment late in the play.** Moreover, Farmer falls victim to the classic blunder of ending his play twice – both times, with seemingly startling occurrences. Had the play simply ended with Grace’s sudden disappearance, the audience would have been left musing over the fate of an innocent child and the identity of the Gray Man. They would have been left gasping. Unfortunately, Farmer fails to end the plot at such a chaotic moment, bringing the tension down and then attempting to drive it back up one last time, with less success.

With respect to casting, Daniel Johnsen brings Simon’s neurotic tendencies and discomfort to the forefront while maintaining the sympathy of the audience – a feat to be sure. It is difficult to imagine Johnsen undertaking any criminal activity; however, as Simon’s reality grows less stable, Johnsen’s performance grows more frenzied – bringing the audience along into his mental dissent. Rounding out the cast are Tahlia Ellie who does a charming job portraying young Grace, Katharine Lorraine and Claire Rothrock who provide great comic relief in an otherwise dark play, and Shane Zeigler who portrays both an amiable friend and a horrifying nightmare with equal tenacity.

Andy Yanni’s set is appropriately stark, yet functional and he and the director, Andrew Neisler, successfully use the oblong room to create both urban and woodland spaces. Additionally, Daniel Dabdoub’s period costume design is quite intricate given the scale of the production – evoking a time long past. Less successful is Christopher Bowser’s lighting design, which, while adding to the eerie ambiance, is occasionally too erratic and too dim to see what is occurring on stage. This is particularly problematic during a key sequence when Simon and John are wandering into the woods together. Moreover, the use of extended periods of pitch black made me question whether a problem was occurring in the wings (and had me fearing for the actors’ safety as they ran by, perilously close to the feet of seated audience members).

Ultimately, for those who enjoy a bit of suspense and horror, The Gray Man is a chilling psychological drama that blends reality and myth, imparting a somewhat more sinister light on the traditional bedtime fable.

*In high school, I watched The Ring and subsequently threw away the television that I had in my room. Not “moved it to another room” where the creepy Ring girl could still emerge from it and kill me in my sleep – threw it away. I am nothing if not logical in my insanity.