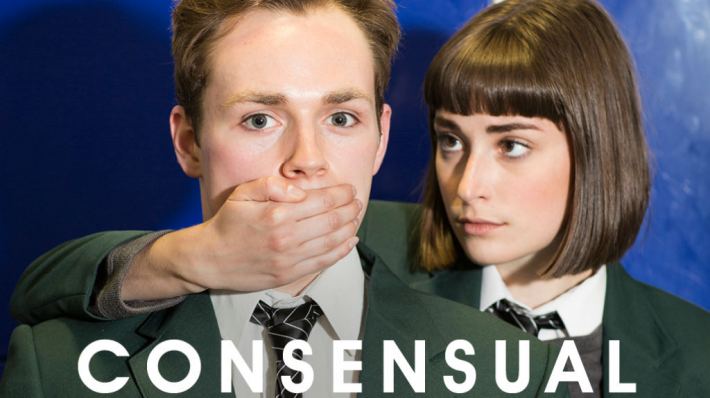 Evan Placey’s script is punchy: it provokes thought and discussion without causing unnecessary offence—a complicated balance to maintain. There are two great contributions to its success: moral ambiguity and changing status. The audience is never comfortable to align themselves with a particular character and the authority that a character has is rarely stable. We see Freddie (Oscar Porter-Brentford), an ex-student of his teacher Diane (Lauren Lyle), desperate to reconcile the affair they had six years ago when he was ostensibly fifteen. His threats to take his case to the police cause the collapse of relationships and individuals—not to mention that Diane is in the late stage of a pregnancy during all of this. Of course, a story about what is legally pedophillia has to be acknowledged, but the tonal counterweight of the play’s humour is what creates its tasteful ambiguity: it is undeniably funny, yet not in the cheap sense as where a playwright may fear the brunt of his own subject matter; like the subject of sex should be, Consensual is serious but with a certain levity that keeps it from numbing the audience.

Structurally, Placey chooses a linear narrative until the play’s second Act, a flashback to an event constantly talked of but never fully outlined by the characters The second Act consists in this scene and it is dangerous, not only due to its taboo content but because the audience knows the scene’s events before they happen. Yet, through feats of exemplary performance and direction it has, for the most part, more ambiguity in its end than in its beginning. Compared to the first half’s hour and twenty minutes, the second half’s thirty is an especially risky attempt and so its success should be rewarded despite its subtlety. It is not pulled off perfectly, however. The subtext that the scene relies on is too overt to appreciate, although the emotion of it is unavoidably engaging.

If Placey’s words are punchy, then Pia Furtado’s direction is aggressive—which is excellent. Not content with silent transitions, Furtado inserts heavy grime music between the scenes (thanks to composer Jim Hustwit) with the occasional rap or dance performed by the schoolchildren who feature in Diane’s sex-ed classes, as though the anger of the music and movement is a manifestation of their frustrated, developing sexuality. The stage, intersected by a monolithic black curtain (neatly used as the occasional blackboard) makes the space smaller that it would usually be which adds to the piece’s intimacy. The blocking uses the space comprehensively and is sensitive to the power relations of the characters. The same goes for the set of the second Act, which is certainly different although I would not deign to spoil it for the reader here. The classroom scenes are the quintessence of Furtado’s direction: there are so many characters with so much to say that a lesser director would have struggled to maintain the necessary equilibrium of energy. Like a good teacher, Furtado gives each a chance to speak without the clutter that is so often the death-knell of a larger cast.

The cast is indistinguishable from, if not more able than, a troupe of seasoned professionals. Lauren Lyle delivers a stratospherically skillful performance as the plagued teacher, showing us fear, guilt, shame and hope in a wondrous slurry of moral doubt; it is rare to see an actor who can gain and then drop their status within a scene so effortlessly and realistically as she does. Conor Neaves is nonpareil playing Diane’s husband: the character’s miring belief in spousal duty is so convincingly depicted that it is impossible not to believe Neaves is twenty years older than really he is. There is truly no limp member of this cast: even though many have relatively tiny roles to play, each contributes something sufficient yet necessary to the drama. It is a marvel of acting, as most of the characters are fifteen years old and yet are portrayed so authentically by those in their twenties. What is most potent in this casting is that it reinforces the play’s crux: children act as adults in many ways, particularly in the Information Age of sex. In Diane’s eyes, her student Freddie was practically an adult, and we see that in stunning clarity through the casting choices; therefore, as our sympathies grow, the ethical difficulty increases, begetting a theatrically rich and diverse piece of theatre.