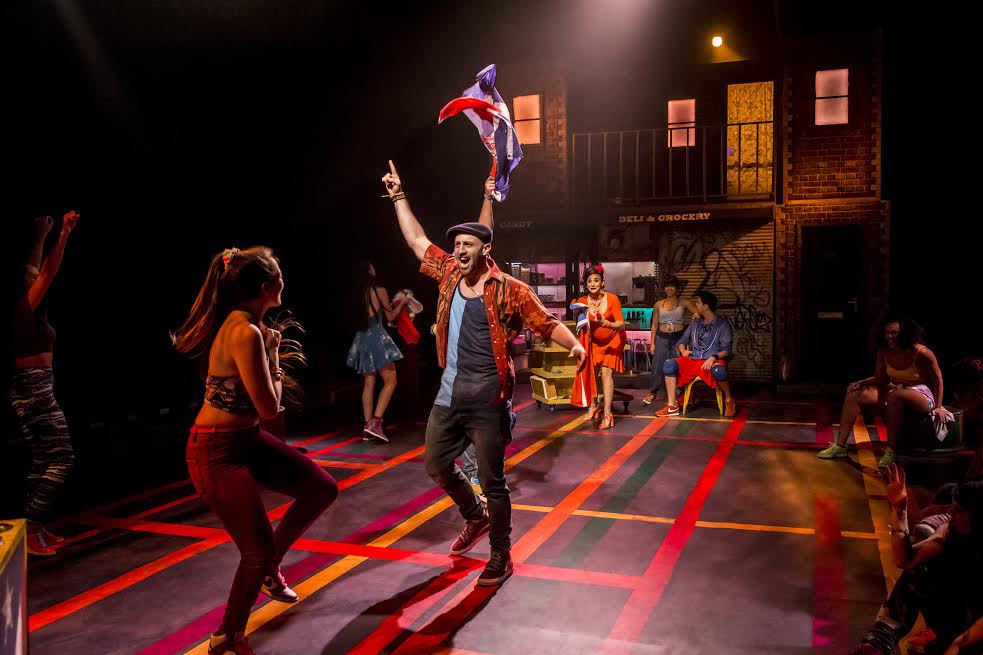 In the Heights at the King’s Cross Theatre

‘Lights up on Washington Heights’—this adaptation of Lin-Manuel Miranda’s uniquely brilliant, Tony Award-winning musical is an absolute must see for anyone with even a slight interest in theatre.

Set in a diverse but mainly Latino area of New York’s Washington Heights, the musical surrounds a close-knit community of friends and family and introduces us to their everyday lives and struggles as they have to adapt to gentrification and various other changes. With a hip-hop/salsa influence featuring heavily in the show, this masterpiece of a musical is a real game changer in the industry and offers something fresh for new and old theatre audiences alike.

This version of In the Heights, reborn at the King’s Cross Theatre following a hugely successful run at the Southwark Playhouse, features a very young cast of incredibly talented actors all working together to produce a wonderful ensemble performance. The show is fast paced, intricate and fluid, leaving you with ounces of adrenaline from just watching. Choreographer Drew Mconie does a fantastic job with his dancers as they weave around the stage, each playing their own unique character. The intensity of the dances is very high, yet the performers make it look effortless, and are often singing difficult harmonies at the same time. The singing itself is also perfect, whether it’s emotional solos or complex chorus numbers, every note sang in the show is perfect—a credit to musical director Tom Deering.

The show is set on a traverse stage owing to the theatre being situated on an old railway line (the two platforms provide the auditorium), and while this allows Mconie and director Luke Sheppard to do some clever things on stage, it is also restricting, particularly during more intimate moments. Due to its humorous book, the show requires a lot of quick interactions that are occasionally missed due to an actor having their back to you. Nevertheless, it does allow for innovative direction during bigger numbers and the narrow staging does fit with the streetlike setting of the musical.

Whilst almost every cast member is deserving of special commendation in the show, it is Sam Mackay who is the stand out performer, playing Usanvi. The narrator and lead protagonist of the piece, and a role that was originated by composer Miranda himself, this is an incredibly demanding part and one that is so far away from the majority of leading roles in musical theatre. His ability to rap, sing, act and dance is real evidence of his diverse talents for the arts. Mackay’s comic timing is also impeccable, helped along by the instantly loveable Cleve September as his cousin Sonny. Lily Frazer, as the troubled college dropout Nina, and Jade Ewen playing the ambitious salon assistant Vanessa, are fantastic in their roles, both with immensely powerful and beautiful voices. Frazer and Ewen are incredibly likeable throughout, making you really empathise with their situations.

The musical also allows those in smaller roles to shine through, in particular Victoria Hamilton-Barrit as local salon owner Daniella. Delivering some hilarious one-liners, she commands the stage in her cameo role. Sarah Naudi, Vas Constanti and Antoine Murray-Straughan also make the most of their parts when called upon while seamlessly slotting back into the ensemble when needed. The musical is at its best during the big chorus numbers with performers singing over each other and moving around the stage with perfect time and precision. The intense opening number, ‘9600’, ‘Blackout’ and ‘Carnaval Del Barrio’ are all incredibly well-performed with unmatchable energy and enthusiasm.

What really shines through in this production is that everyone on stage seems incredibly happy to be performing with each other and the cast are clearly doing something they love to do. Given the show radiates themes such as friendship, care for others and community, this is vitally important for the piece and makes the whole experience more relatable and intimate.

I really can’t speak more highly about this musical, from the writing to the choreography, to the staging to the performances, everything is perfect. The show has a limited run and who knows when it might be showing in the UK again, so I urge everyone and anyone to go and buy a ticket before it is too late. In the Heights deserves to be seen by as many people as possible and I guarantee that if you go, you won’t regret it!