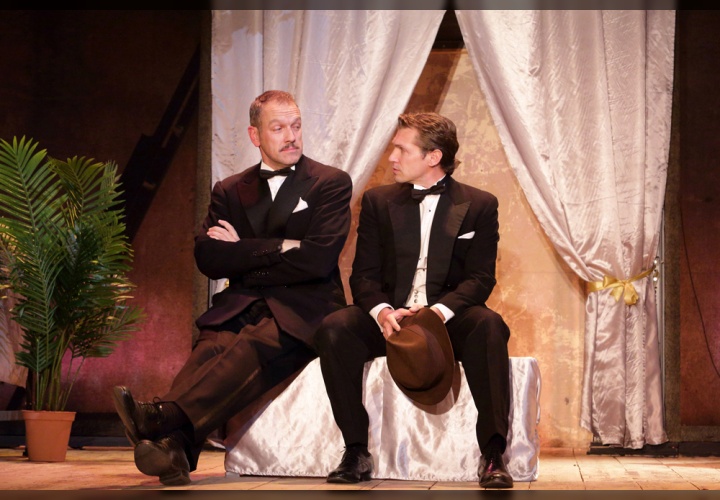 The Sting at Wilton’s Musical Hall

The theatrical adaption of the beloved 1973 movie The Sting, now playing at Wilton’s Music Hall, promises an entertaining night back in time.

Unbeknownst to them, two small con artists named Johnny Hooker and Luther Coleman make big shot runner Doyle Lonnegan very angry by scamming one of his men. Without giving too much away, it centers on the theme of revenge. The Sting paints a picture of the gangster scene of Chicago in the 1930s. With plot twists, gambling, violence, comic relief and captivating characters, there is never a dull moment.

While the play is superb, there is also something to be said about the venue itself. Wilton’s is the oldest music hall in London, dating back to the mid 19th century. Up until quite recently, the venue has gone through major restoration to turn it into what it is today. With stone walls and woodcarvings, it keeps its old music hall charm which is perfect, especially for The Sting. From the moment the doors open to the auditorium, the spectators feel like they have drifted back in time. The lights along the bottom of the balcony, the minimal stage décor with a large grey structure and a few wooden chairs and the deep blue lighting are absolutely enchanting.

The play, directed by Peter Joucla, asks the public to use their imagination. Indeed, at the start of the play, the elegant Nina Kristofferson, narrating parts of the play, tells us we must be creative and picture 1930s Chicago because we will never actually see it. From that point onwards, everyone’s attention is fixed onto the stage and everyone, in a way, becomes one with the story. The music and costumes add beautifully to this, as does the director’s decision to have actors run in and out of the stage through the audience.

Each actor gives a stunning performance adding to the overall success of the play. Bob Cryer and Ross Forder, playing Gondorff and Hooker, two Chicago crooks wanting revenge over the big guy, embody their characters extremely well. Their mannerisms and their accents, complimented by the costumes, make for a very entertaining night. While there is not much depth or thought that is asked of the audience, aside from the imagining of the 1930s, the actors’ feelings and changes of emotion are clearly interpreted and are well transmitted to the spectators.

The size of the stage is dealt with very well by the tall grey structure used at the back of the stage. Playing with shadows, it gives a sense of further depth, making it look like a wall or another room.

The Sting offers a terrific night out for anyone wanting to rediscover an old classic turned into a theatrical production. It does not imitate the movie exactly. In fact, Scott Joplin’s main song from the movie, “the Entertainer”, is not even played until the end of the show. Nonetheless, the charm of ragtime and old clothes with a captivating story makes it a show to see before it ends on October 17th!