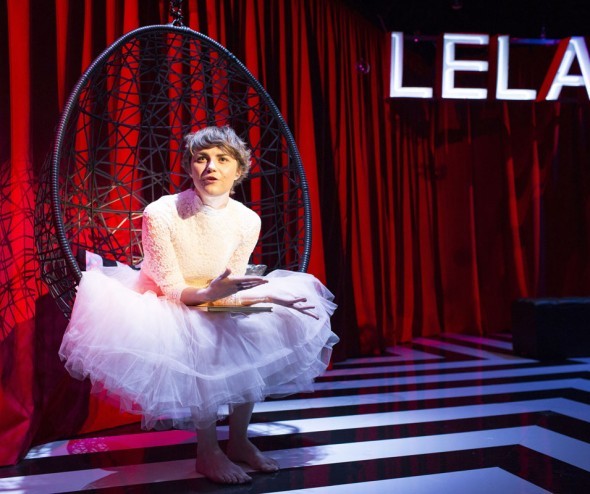 It is best to see Lela & Co without knowledge of it beforehand—if you want to see worthwhile theatre then stop reading this and go see it, essentially. The reason you want to know less about it is that Cordelia Lynn’s script creates expectations from the outset and relentlessly reshapes them. Lela is a pitiful character but one who elicits real sympathy. Along with Jude Christian, the show’s director, Lynn manoeuvres away from sentimentality and numbness via balance and a clash of form with content. While some of its commentary on capitalism and the patriarchy is overdone, it all makes for genuinely upsetting theatre.

It all starts with Katie West’s first lines as Lela. What is so key is that she does not show herself as that sympathetic of a character: she speaks too quickly and complains, with juvenility, of the injustices in her childhood. David Mumeni as her father, meanwhile, occasionally interjects with overtly masculine opinions of his family. The expectation is made: Lynn writes a childhood for Lela that, while imperfect, is something typical. The stage’s design (by Ana Inés Jabares Pita) and its lighting (Oliver Fenwick) also suggest a slight egotism in Lela since the set has the appearance of a 70s television special where she is the star—LELA is in neon capital letters above her. This appearance belies the much darker events that follow: Lela is put into the care of succeedingly awful men and subjected to near-inconceivable abuse.

What Mumeni does so well in playing all of these men is that he acts as a protagonist: his characters’ actions are so much more sinister for the way they use a nonchalant language of business. It is a shrill effect: he has the intonation and gesture of a Ted Talker while speaking of rape and molestation—the genius in it is that because there is little signposting of his atrocities committed on Lela, we feel the evil of it so much more strongly. Form covers content but this makes it so much more apparent. Similar to Mumemi, West mostly retains the same quick and candid delivery of the play’s opening, but whereas it seemed a nuisance at first, this style clashes with her predicament so much that the horror becomes terrifying in its clarity.

West’s performance is more nuanced than this, however. She carefully breaks away from her storyteller persona and visibly weakens at the pain of her retelling. Christian is clearly conscious of the unwanted numbing effect tragedy can have on audience and so makes West be careful in how confrontational she is towards the audience. This is beneficial as the piece hardly ever feels sentimental. The only balance that Christian fails to strike is in the play’s conclusion where West’s performance is too direct in fully capturing her return home.

The great achievement of Lela & Co is the way in which it makes its protagonist’s suffering unavoidable. Along with the elements explained above, its method of achieving this is not the way much London theatre does it, by putting more on the stage (see my recent reviews), but it is by taking elements away. The quintessence of this in the near-total darkness of many of the play’s scenes—the abuse that seemed unimaginable previously is made appalling conceivable: as an audience we hear Lela’s pained descriptions of her rape and beating; since we have nothing to mollify them, we are entirely at the mercy of our own thoughts. The result is actually disturbing as opposed to merely discomfiting.

There is another, more subtle manner through which the story’s grief is made inescapable: the audience is led to believe that Lela is a girl from the north of England due to her accent and appearance, yet after her displacement to a foreign country and a conversation where she and soldier both speak English though she is not understood, there is a suggestion that Lela is not merely a Northerner but rather could be of any nationality or even identity. Despite her being a symbol rather than a complete character, Lynn’s reversal of expectation here makes Lela’s pain all the more universal and real. It is instances of theatrical dexterity like these that this piece such authentic theatre.

Lela & Co is at the Royal Court Theatre until October 3rd.