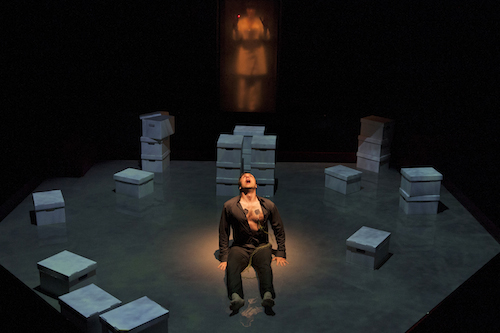 In Stratford: Possible Worlds & The Physicists

Two moderate highpoints of the 2015 Stratford season, Possible Worlds & The Physicists are both works of thematic ambition with refreshing visual flair. Strong casts and well-paced direction help both pieces stand out though neither stirs the heart nearly as much as it attempts to challenge the mind.

In John Mighton’s Possible Worlds, a somewhat forgettable love story is told in unforgettable ways as Cyrus Lane and Krystin Pellerin (both subtle and sublime) navigate parallel universes with the help of some of illusionist David Ben’s most reliably confounding tricks and director Mitchell Cushman’s thoughtfully water-soaked staging. Fluidity, reflection, illusion, submersion and, eventually, a draining effect so gradual that the landscape appears almost completely changed before you notice the change occurring- Cushman’s inconvenient use of a water-filled playing space adds visceral intrigue and thematic clarity to Mighton’s delirious play. The supporting characters and the subplot science are dramatically overshadowed, making their presence seem like overcrowding, but Cushman’s ambition is among the most intellectually intriguing direction I’ve seen at a festival in quite some time.

Like Possible Worlds, The Physicists spins an intellectually demanding story where reality is uncertain. With one foot in the 1960s (when Friedrich Dürrenmatt wrote the original script) and one foot in 2015 (with Michael Healey’s adaptation), The Physicists is a tale of two times featuring characters who believe themselves to be people they’re not… or do they? The play has high philosophical morals when it comes to the military industrial complex but lacks the decency to treat the serial murders of innocent women as much more than a recurring gag (a reality made even more startling by the stirring empathy Claire Lautier brings to her role as one of the victims). It’s wacky and fun (Mike Nadajewski and Graham Abbey are both utter delights as asylum tenants who call themselves Einstein and Newton, respectively) but also a sad contemplation of the price of genius and the threat of science and the horror of mental illness.

The Physicists is less enthralling than Possible Worlds but more entertaining, less artistically bold but more intent on getting its message across. Though they’re not ultimately all that stirring (entertaining and intriguing, certainly, but neither hit me in the heart), both these productions have what Stratford needs more of this year- ambition and something to say.