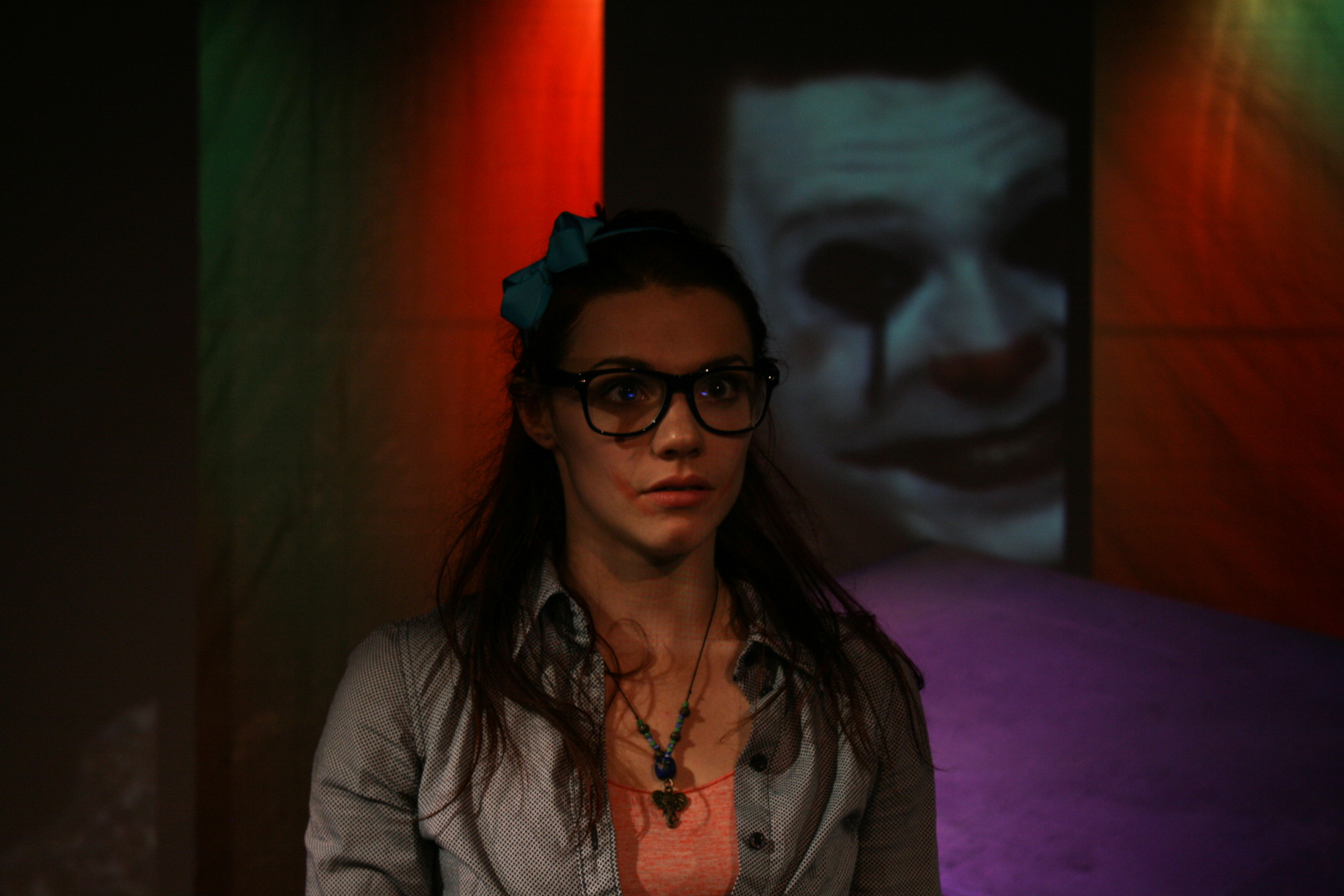 Like A Generation is Coyote Collective’s re-mount of an earlier production from 2013 with an updated multi-media set and lighting design. Written by Max Tepper, and directed by Blue Bigwood-Mallen, the show is a show “about television (or I suppose streaming since no one actually watches TVanymore,” Bigwood-Mallen writes in the show programme.

And indeed it is: the first scene brings the audience front and center to the taping of Mr. Flowers, a children’s show featuring, you guessed it, Mr. Flowers and his four backup clowns. Stephen Joffe offers us up an interesting central character in the form of Mr. Flowers, a narcissistic clown who hopes to change the world while pulling the strings and keeping himself at the center of the action. The tone of the show is decidedly creepy – he’s often a little too enthusiastic, and you’re never quite sure what his motives are. Is he interested in us? Or is he interested in us being interested in him?

Cut to two people in a coffee shop – Anna, the barista, and Calvin who is buying a coffee from her while staring at his phone. Eventually they connect when Anna gives him her number instead of the internet password, and they start dating. On their first date they bond over having loved Mr. Flowers, and on their second date they stream an episode while cuddling on the couch. This becomes a scene where the characters in the show start watching them – and the slightly surreal aspect of the show begins. Who is watching who, exactly? And why?

The acting overall is very strong, with a special nod to Joffe who maintains an intense and consistent level of energy and pizazz. He also brings a kind of complexity to the character: he’s image-obsessed and narcissistic, but also weirdly idealistic, sensitive, and emotional. He wants to help people! But he also wants to advertise batteries. He’s complex, and conflicted. But I should note that all of the characters – including the masked clowns – have distinct and interesting personalities. And while the clown scenes are (intentionally) creepy, they are also often hilarious.

The part that starts to break down for me, however, is when trying to understand what this show is about more specifically. It’s about television, sure. And it’s about the ways in which we are ‘plugged in’ to the world around us, often causing us NOT to connect with those who are right in front of us, from whom we might be purchasing a cup of coffee. But is it just another piece on the theme of how being increasingly technologically connected makes us less humanly connected? I mean, maybe, but we have so many of those already, and frankly they aren’t that interesting anymore. But it did seem like the show was about more than just blaming technology for our social demise.

It was, perhaps, about how we internalize tropes from television shows that might have been formative for us as children, and somehow project them onto our adult lives, creating a tense dynamic between the people we take ourselves to be, the people who we think we’ll be as kids, and who we actually are according to our actions. And yet this didn’t fully play out for me, thematically. The main reason was that I didn’t get invested in Anna and Calvin’s relationship. The first night Anna stays over at Calvin’s, she wakes up the next morning feeling like she’s made a mistake. Now, this is never explained, except that Anna ‘felt like she was being watched.’ But in what sense? Not literally, we presume, but then what does that feeling amount to? Next we see her in a manic kind of nightmare, dreaming about Mr. Flowers pressuring her to keep dating Calvin, because… that’s what Mr. Flowers wants? But Anna protests, she didn’t have a connection with him – something that seems totally reasonable, since this happens all the time. Why should that be a function of technology and not just a human inevitability? And it’s confusing (and creepy) what kind of reasons Mr. Flowers has for not listening to what Anna is saying. Finally he pressures her into calling Calvin, which she wakes up and does in real life.

Anna asks Calvin to swing by her work so they can talk. But she gets pulled into an unexpected meeting (for an hour? At Starbucks?) with her boss, which isn’t her fault, and when she finally comes out to apologize, Calvin whines at her for leaving him there for so long and storms off. Good riddance, I thought. This guy seems like a selfish whiny jerk. Then, there’s been a power outage in her building, so she calls Calvin asking to come over. She goes over, to find him drunk at 3am. It’s unclear why she’s there – is she lonely? She maybe feels bad about making him angry? Is she trying to get back together or just patch things up? She doesn’t seem that comfortable around him though, and at some point he lunges at her drunkenly and she pushes him away. Finally, Calvin has a dream (the same fantasy that Mr. Flowers has, in fact) where she came over, they got back together and had a lovely happily ever after that includes breakfast in bed and Anna confessing to Calvin that he’s ‘her hero’. Gross.

They finally meet, serendipitously, at a bus stop in which Calvin reminds her of when he made her breakfast, and Anna looks at him confusedly and nervously makes an attempt to leave. That never happened, she tells him. And we realize that Calvin himself has confused his dreams with reality. Like, at this point I want Anna to run far, far away from this weird delusional man.

This seems way more about male entitlement than it does about technology though, and I suspect that wasn’t really the intention behind the show, because it seemed to have layers of nostalgia and romance on top of what might have been an unintentionally creepy narrative. I suspect that we are meant to want their relationship to work out, if only it weren’t for the barriers between them, and their own fear of connection. And if the idea behind it is more romantic, and about how we ultimately want more connection than we achieve, I think this show needs to rethink the plot in the second half a bit, in order to figure out how to convey that idea more effectively.

Regardless, the show’s design is well thought out, making excellent use of a single diamond-shaped platform in the center of the stage. The clown costumes are colourful and impressive, and the choreography and clowning movement incorporated into the show helps add dimension and lively atmosphere. Overall an entertaining production and worth checking out.