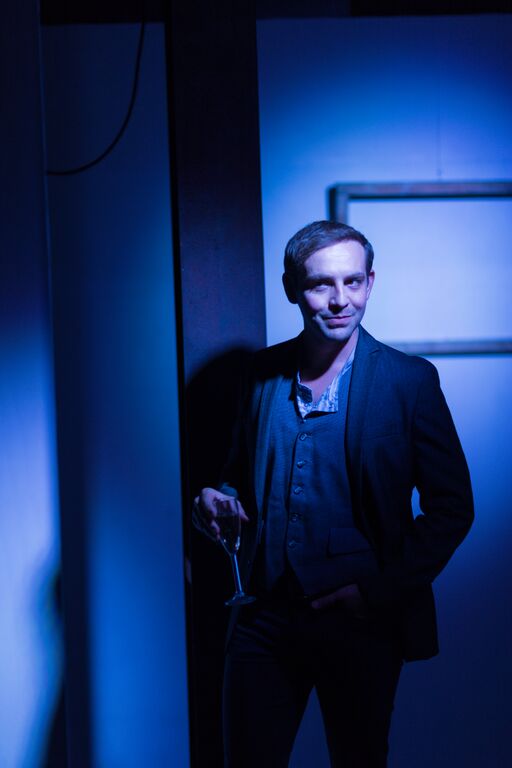 Wax Wings Productions took on Cassie M. Seinuk’s new play at The Inner Sanctum Gallery the first two weekends of August. Wax Wings is a daring group that does not shy away from the fiery challenges of life in the theater fringe; unfortunately, they missed the mark with this new work. Daring in its exploration of trauma and the creative ways through which painful experiences can be expressed, the play nevertheless falls short in character construction, dialogue, and pacing, making for a long summer night in Roxbury.

Victor Shopov was delightful to watch. He expertly portrayed Turner’s fragile conceit in an opening monologue, an artist sipping champagne as he observes his own work and (mostly female) fans, reassuring himself that he is indeed a success. Cocksure one second, wide-eyed and stuttering the next, Shopov’s performance was strong as the evening’s events took a turn for the violent and destructive.

Underhill once again impressed me with his ability to slip chameleon-like into the role of the disturbed and derelict Palmer. No longer the handsome “hero” with perfect diction of many an imaginary beasts’ Winter Panto, Underhill’s damaged “Cyclops,” in his erratic speech and volatile physicality, made the painful and the ugly side of life visceral, strangely charismatic, pathetic, and very real.

This is where my praise ends, and my explication of the play’s two biggest problems begins. The first involved the psychotic/demonic interludes in which the audience can witness Turner’s torment as manifested by brief breaks in his perception of reality. The lights burn low (excellent work by Christopher Bocchiaro), and Turner sees and hears (sound by Patrick Greene) garbled and unspeakably horrible impressions/memories of his abusive Vietnam Vet father. The staging of these episodes wasn’t bad, but the constant interruption of the show for the sake of these effects muted their impact considerably.

The second involved the character of Johanna. Despite Shopov’s best efforts, I couldn’t help but notice that the banter between him and DeJesus’s Joanna was not electric. The flirtation seemed to be going for textbook “sexy” rather than being based on real chemistry. While I initially chalked this up to the inherent difficulty in staging flirtation (I had the same issues with Zayd Dohrn’s Muckrakers) I soon recognized the problem: Johanna’s character is a cardboard cut-out.

At best, she seemed to be a catalyst character that pushed the plot forward at key junctions. Her insistently-voiced desire to see Turner’s work was not very subtle as Johanna (supposedly an experienced undercover hack writer) pretended to be the attractively contrarian chick Turner wants to sleep with; her bald inquiry about a horrific accident in Turner and Palmer’s youth, made while the couple is making out on a couch, should have raised flags for him not matter how clueless he is to her obvious ulterior motives. There were many other moments where Johanna’s interjections were helpful in keeping the conflict roiling, but stark in their falseness.

To Seinuk’s credit, she tried to interject some motivation for Johanna’s journalistic exposure of Turner by adding in some childhood trauma to explain her actions. It proved too little, too late. I would go so far as to say the play may have benefitted from being a two-character production. The confrontations between the two brothers would have been powerful enough to explore the costs of attempted suicide/homicide and of willfully forgetting the past, especially as excellently performed by Shopov and Underhill.

Already weighed down by these two clunky and costly dramaturgical problems, the uneven dialogue made the show fearfully drag halfway through, making me grateful the play took under two hours. Despite some creative flourishes and strong performances, this production left me feeling troubled for all the wrong reasons.