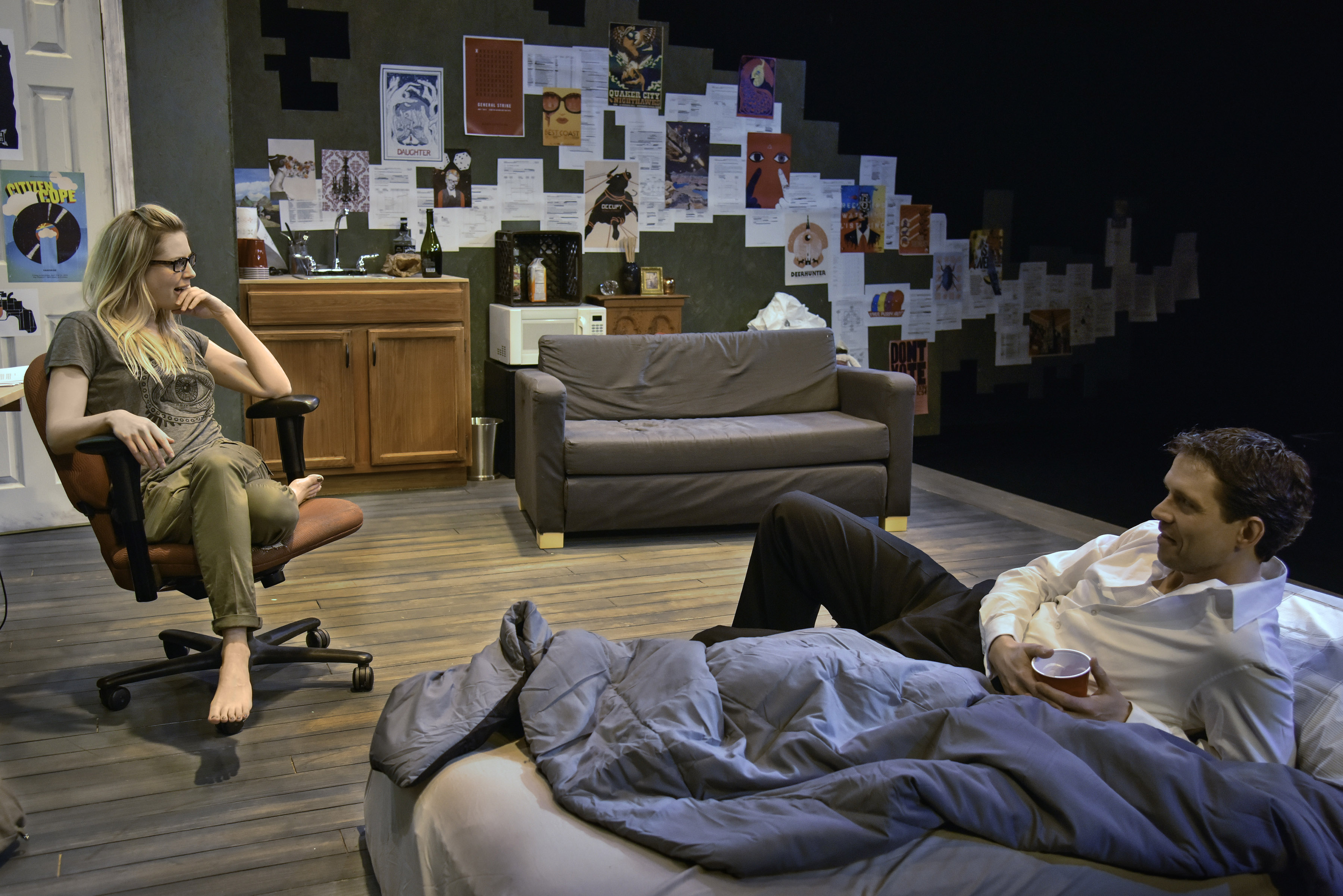 The title was the first thing that caught my eye. If you browse the program notes of New Repertory Theatre’s latest production, Muckrakers, written by Zayd Dohrn, directed by Bridget Kathleen O’Leary, you’ll find many references to contemporary whistleblowers like Edward Snowden and Chelsea Manning. We are prepped to think this show will be about privacy in the digital age, the ease with which information can be shared, and the consequences that come when private citizens take political matters into their own hands. And the show does indeed address these points.

But the term muckraker, generally referring to journalists who lean more heavily towards activism than objectivity in their reporting, is not the usual term used to describe the Snowdens and Julian Assanges of today. The term “muckraker” was popularized in 1906 by Theodore Roosevelt, who was describing a then-newfound breed of reporters that sought to expose political crookedness and little-known social injustices perpetuated by those in power.

Roosevelt pointed out that the risk these rakers run is in concentrating too hard on the muck and not knowing when to quit. The public then risks believing that the institutions being criticized produce nothing but harm and evil to the society they exploit. The intriguing duality behind the term is muted in our current use of the word “whistleblower,” which semantically implies someone who draws everyone’s attention to something objectively startling or dangerous. The uneasy questions remain, regardless of which term we use: should attention always be drawn? Is transparency always the best policy? Are the troublemakers who expose the truth traitors or heroes?

The interpretive richness in the title alone made me think this production was poised to deeply delve into these questions. Unfortunately, Muckrakers loses too much time before it finally plunges beneath the surface. The play has a slow start it never quite recovers from. Mired in an awkward set-up that it only begins to make up for well past the short performance’s midpoint (the production lasts about an hour and twenty minutes), even the exciting ending does not amend the parade of stock situations and dialogue clichés we are subjected to early on.

The plot is straightforward: a young anarchist named Mira (Esme Allen) hosts a famous whistleblowing hacker, Stephen (Lewis D. Wheeler), in her apartment after he wins a journalism award from her school. What begins as a boozy, flirtatious, late-night encounter slowly curdles into a complicated, evening-long argument over the right to privacy, ownership of information, and the virtues and drawbacks of “transparency.”

The play begins with the two tripping into Mira’s apartment, a space that screams her ideology from the walls (scenic and properties design by Alexander Grover). The small “apartment” is crammed into the corner of the Black Box Theatre, with the audience voyeuristically crowding in from two sides. Every inch of the walls is papered with far left-leaning political posters and other liberal cultural markers (I was a particular fan of the Occupy movement and the Kate Nash posters). An air mattress lies on the floor next to a small couch; a tiny computer monitor has its screen content projected onto the wall above the desk on which it lies. For most of the show, we see the words “The Durga Project” projected continuously and ominously on the wall. Kudos to the lighting and sound design (Christopher Brusberg and Edward Young, respectively), for hitting the cues so exactly that we really think we are in a Manhattan shoebox apartment.

The realism ends there. I expected that the early banter between Mira and Stephen, two slightly tipsy and horny individuals, would be a little awkward but still humorous. But as the two started to get to know each other, the conversation felt stilted and completely unconvincing. Try as the actors might to infuse the dialogue with naturalism, it wasn’t coming to life onstage. While Mira congratulated Stephen on his new fame and popular prestige in the face of political notoriety, and Stephen self-deprecated and tried to steer the conversation towards more personal topics (both are constantly pouring each other drinks), the audience laughter remained muted. It just didn’t feel real.

It seems like the playwright was so anxious to lead us into the series of dichotomies that will mark Mira and Stephen’s political debate later on that he sets the characters up to be types who would inevitably fall into the most clichéd of conversations. For example: the decision to make Stephen British is a profoundly painful one for the audience as we are splattered with a whole tired exchange on the differences between English and American accents and culture (in a rare, winking moment of self-aware dialogue, Stephen amusingly points out that having discussed “James Bond, the Beatles, and Monty Python; we seem to have exhausted American knowledge of British culture”). The decision to make Stephen over a decade older than Mira led to the necessary generational debate between Millennials and Generation Xers, how exhibitionist the Facebook generation is compared to the stodgier folks who came before them. It was excruciating, and stalled the play’s momentum.

Thankfully, eventually, Allen and Wheeler are allowed to drop the rom-com act and get into the meatier discussions, displaying much more interesting personal (and physical) connections than the first half prepared us for. After listening in on their arguments over whether there is a difference between classified versus private information, whether private citizens should be held as accountable as public figures, and how can we go about the business of making our actions meaningful, I have no doubt that the subject matter of this play is serious and interesting. And the dramatic denouement is actually quite exciting, ultimately saving Muckrakers. But this play could be ten times stronger if Dohrn strengthened the development of his only two characters before rushing us into a timely discussion of current affairs.

The New Repertory Theatre production of Muckrakers is playing now through February 1, 2015 at the Arsenal Center for the Arts, Black Box Theater.