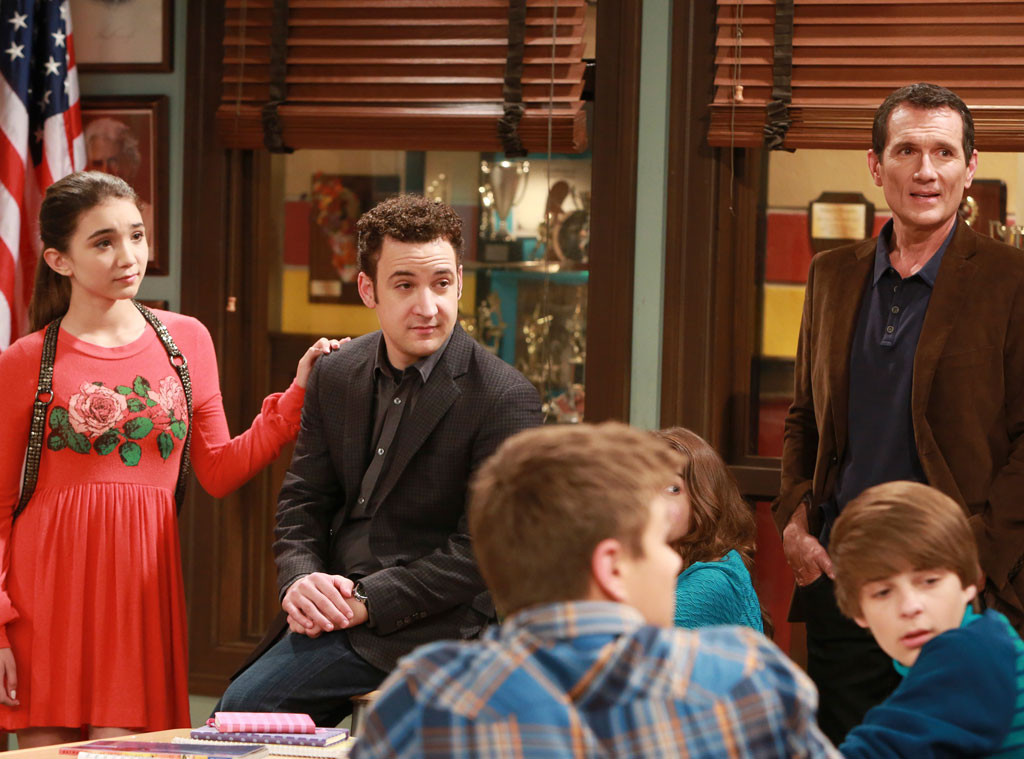 The Many Reasons Why Girl Meets World Is Working

Friday’s episode of the newly Emmy-nominated Disney channel appropriation of my formative childhood series was one of the show’s best thus far.

The second season followed the first with almost no hiatus but the small break did give the producers time to listen to a few criticisms and sign a few key contracts. First, they’ve toned down Riley’s look, de-glamorizing the gorgeous Rowan Blanchard to bring her closer to the everyman figure her father was (though we’ll never buy her as a true Cory-style underdog). Second, they’ve brought in a ton of great guest stars from the original series. After the insane excitement of Shawn’s return in season one’s Christmas episode, Rider Strong has become a semi-regular figure as the series leans into the fact that Maya was clearly designed to be the “Shawn” of the new version. Also contributing to Maya’s ever-expanding array of interesting relationships is the adorable Uriah Shelton as the now-grown Joshua Matthews who showed up in the fantastic episode “Girl Meets the Tell-Tale-Tot” (excellently written by Teresa Kale) to teach the perfect lesson about growing up and what that means (on-the-nose lessons are an unfortunate part of the show that you eventually learn to tolerate).

This week, it was Mr. Turner. You remember Mr. Turner- dashing English teacher, long hair, motorcycle, leather jacket, fatherly fondness for Shawn- ringing any bells? The idea of Mr. Turner was floated throughout the episode with vague references and fun deja vu as Riley & co were introduced to a new English teacher with a motorcycle and the rebellious thought that teaching comic books could be valuable. The thrill of seeing Anthony Tyler Quinn again came later (and was especially fulfilling since his tenure on the original show ended early and abruptly).

The episode was fantastic- fun in both organic and nostalgic ways with a message that wasn’t too cheesy or repetitive. Fittingly written by series creator Michael Jacobs, “Girl Meets New Teacher” was an awesome reminder of why Girl Meets World is everything it ought to be. The following are a few of the reasons:

1) Embracing its history. With a full season of establishing itself as a new show for a new audience under its belt, Girl Meets World is getting more and more comfortable with its strange multi-generational identity. More and more, the lessons of Cory’s day are being expanded upon rather than retread with this week’s comics in English class storyline serving as a prime example.

2) … but with a new spin. I loved that the Mr. Turner figure this week was a woman. Though Topanga and Amy Matthews were great, the standout characters on the original series tended to be men so it’s awesome to see the new show casually balancing the universe out without simplistically coding the new series as the “girl version”.

3) Speaking of Topanga… No one writes Topanga like Michael Jacobs. She’s usually good for a funny line or two per episode (Danielle Fishel shines in her Ava subplots) but her voice hasn’t been coming through as strongly in the new series as I would like. Then the creator of the character brought Topanga back to life this week, without even giving her anything to do (not a part of the main plot, Topanga mostly just hosted family meals this week, which unfortunately is most of what she does most weeks). The adorable over-confidence, the teasing wisdom, the demanding perfection- I remember that girl! I loved that girl. We need more of that girl. Topanga needs some plots of her own but, mostly, the new writers need to watch some old episodes to learn Topanga’s voice as well as Jacobs can write it.

4) Using the franchise’s assets. Need a well-intentioned dummy to help prove a point about political corruption? I give you Eric Matthews (extra points for an out-of-the-blue Tommy tie-in)! Does the school need a janitor? Why not turn a bit part into a bittersweet reminder of the power of empathy and second chances by bringing back Cory’s high school bully for the role? Girl Meets World is doing a great job of using the pre-existing Boy Meets World universe to its advantage.

5) Investing in new characters. I’m a little bit obsessed with Lucas Friar. He was so undefined when the series began and his archetype (“Mr. Perfect”) doesn’t come with built-in growth opportunities like there are for Riley, Maya and Farkle (the naive princess, the misunderstood rebel and the cerebral oddball) so the first two seasons of Girl Meets World have involved a lot of slowly chipping away at Lucas to discover who he might be underneath all the perfection. Remember how hard it was for Cory to understand that Shawn’s good looks and easy popularity weren’t the keys to his happiness? I feel like that’s Lucas’ journey all the time- how to convince someone like Farkle that he honestly wants to be his friend; how to convince someone like Riley that they can take it slow and she won’t risk losing him to some more grownup hot girl; how to convince someone like Maya that he’s a real, flawed, insecure person just like her rather than the two-dimensional “Ranger Rick” she’s built up in her head. Little things like the way he volunteered to do the Dark Knight presentation this week only to confess that he’d already read it- we’re getting to know Lucas a tiny bit more each episode. I might be wrong- it’s possible that he’s just an ill-defined character- but so far I’m really enjoying the slow-burn development of this definitely-not-from-Boy-Meets-World character.

7) FARKLE. Guys, Farkle is the greatest. And, even though he didn’t carry much plot this week, a small exchange wherein Mr. Turner correctly identified him as Stuart Minkus’ son spoke to exactly why Farkle is the greatest (also, Corey Fogelmanis is just so wonderful in the role). Boy Meets World was always a little bit quirky, especially in the later years, and Farkle carries that tradition into the much sleeker new series but what I like is that the offspring of an essentially one-off joke character is allowed to really be a part of the gang in this new-world edition. So much of Boy Meets World was the everyman’s attempt to fit in; Farkle’s story is about the oddman’s attempt to fit in- it’s the same thing, just one step further. Farkle’s like season one Topanga, before her normalization for love interest inevitability. All I want in the world is for Farkle to stay fully Farkle and for the show to get to explore all the fascinating territory that comes with that- will he one day fall for a girl who’s not Riley or Maya and have to come to terms with letting them go? What if his “super genius” intelligence forces him to outgrow his friends? Will there come a point when young adult society’s overvaluing of Lucas’ best traits and undervaluing of Farkle’s makes him lash out at his friend? And what about the original Minkus- will Cory and Shawn’s consistent mistreatment of him ever come up? Might her parents’ systematic dismissal of his father eventually put pressure on the Riley/Farkle relationship? Farkle is the perfect symbol of how Girl Meets World is building on the legacy of Boy Meets World without retreading territory. He’s a link back to the old series in both tone and lineage but his role at the heart of the show is only possible in the new series.

Instead of dragging the weight of its predecessor behind it, Girl Meets World has smartly climbed on Boy Meets World‘s shoulders to see how high they can reach. So far, it’s really working.